The decline of baptisms has been sharpest in the diocese of Brussels, according to a survey of the Bishops Conference. Evangelical and Muslim are growing. 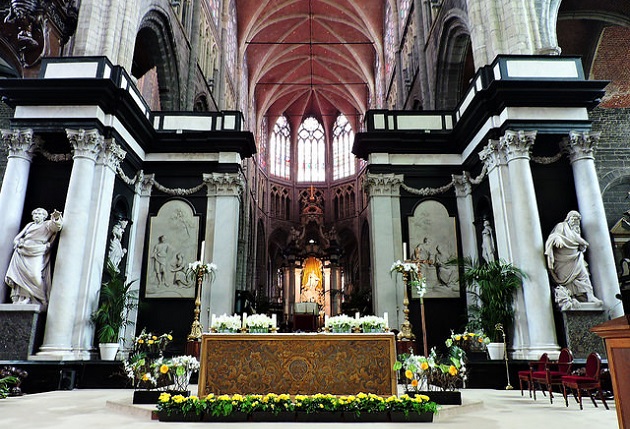 The tendency has been there for several decades, but the reality is now more and more visible: the Roman Catholic Church in Belgium is rapidly losing social presence.

Last year, for the first time, the ratio of children being baptised was less than 50 percent. In other words, the majority of the Belgian parents does not want to have the traditional relationship with the Church anymore. Although religion is not just to be measured with statistics, these figures seem to confirm the diminishing interest of the Belgian population in the Roman Catholic Church.

Since 2010, the decline of baptisms has been the sharpest in the Brussels diocese (32%) and in Antwerp (31%). Only in the Ghent area the number of baptisms stays relatively stable, with a decrease of 10%.

The figures belong to an ongoing survey of the Belgian Bishops Conference in cooperation with the University of Louvain. The official results are expected to be published later this year. The purpose of the survey is to gain more insight in the religious life of the Belgian Catholics.

In an interview with a national newspaper, Geert De Kerpel, spokesman of the Bishops Conference, admitted the negative results of the survey but did does not see reasons for panicking. “Like any other organisation, we would prefer a growth rather than a decline, but we will not start a promotional campaign”, he said.

“In the society we see an evolution from a church to which people belonged automatically to a group of people that choose consciously to be part of the church. When people are really convicted they specifically decide to have their children baptised and they will stimulate them to belong to the church”, the Catholic representative added.

Over the last decades there has been a growing secularisation of Belgium’s society. Church attendance gradually dropped to less than 10%. But the trend is also seen in socio-political and ethical changes. The approval of new abortion and euthanasia laws can be considered a proof of the shift towards liberal stances of the population.

The Roman Catholic Church will focus on new ways of believing, according to De Kerpel: “We aim to do what the first diciples of Jesus did: to be authentic Christians – a church offering the alternative that people are people are looking for, a church that is authentic and exciting”.

GROWTH OF EVANGELICALS AND MUSLIMS

In contrast to the Roman Catholic Church, Belgium witnesses a growth of evangelical churches and Muslim communities.

The increase of the number of Muslims is mainly due to natural growth and immigration.

But newcomers from other countries are also the most important cause for evangelical churches to grow: many of the new communities have their origins in African countries; in particular, Christians arriving in Belgium from the Democratic Republic of Congo and Ghana establish churches in the larger cities.