European evangelicals join new freedom of belief campaign: “Believe it or not, it’s my Right!”

The new #FoRBDefender movement stands in solidarity with people across the globe facing discrimination, oppression and violence because of their religion or belief (including non-belief).

The European Platform against Intolerance and Discrimination (EPRID) launched its new #FoRBDefender movement on freedom of thought, conscience, religion or belief, calling on people everywhere to unite under the slogan, “Believe it or not, it’s my Right!”

The #FoRBDefender movement is an online initiative raising awareness of the right to freedom of religion or belief (“FoRB”). The movement stands in solidarity with people across the globe facing discrimination, oppression and violence because of their religion or belief (including non-belief) and calls on high-level decision-makers at national and international level to more robustly defend and protect this fundamental human right.

Amy Shepherd, CSW’s EU Advocacy Manager and member of EPRID’s 2018 Board of Coordinators, said in a statement: “Across the world, people’s freedom to choose, manifest, change and abandon their religion or belief is under threat”.

“There is an urgent need to stand up for FoRB and press decision-makers for more concrete and visible protective action. EPRID hopes that by reaching out to politicians, diplomats, media, business, civil society activists and others, the #FoRBDefender movement will show that FoRB protects everyone, and that everyone has a role to play in protecting FoRB”.

Freedom of Religion or Belief is a right for everyone! Become a #FoRBDefender and stand in solidarity with people around the world who face discrimination, oppression and violence because of their theistic, non-theistic or atheistic beliefs https://t.co/M8yZGnSJsh #FORB pic.twitter.com/PcgUoDFuXu

The European Evangelical Alliance (EEA), one of the founding members of EPRID, has a long history of defending Freedom of Religion or Belief for all. 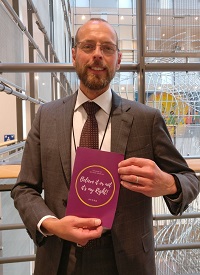 The EEA calls on all its members to support the campaign and to promote it on their social media channels. “Freedom of Religion or Belief is way too precious a human right to take for granted. We have to stand united in defending and promoting it, close to home but also in the rest of the world”.

A COMMITMENT OF THE EUROPEAN UNION

In 2013, the EU adopted Guidelines on the Promotion and Protection of Freedom of Religion or Belief which set out how it intends to advance this fundamental right in external action.

The #FoRBDefender movement has been inspired by EU-level discussions on how the Guidelines could be better implemented.

#HumanRights include Freedom of religion or belief, whether you are religious, non-believer, agnostic, want to change your beliefs or stop believing. Become a #FoRBDefender today. There are many ways to get active #IBelieveOrNot https://t.co/3Hw4Xp6WE3 pic.twitter.com/lVBLuVsAme

According to research by the Pew Research Centre, around 80% of the world’s population suffer discrimination, oppression or violence because of their religion or belief. No religion or belief group, including theists, non-theists and atheists, are exempt from FoRB violations.

Published in: Evangelical Focus - europe - European evangelicals join new freedom of belief campaign: “Believe it or not, it’s my Right!”