Ján Figel: ‘Indifference, ignorance and fear are the worst enemies of religious freedom’

“I encourage companies, businesses, to promote religious freedom and diversity at the workplace”, says the EU Special Envoy for the promotion of Freedom of Religion or Belief. 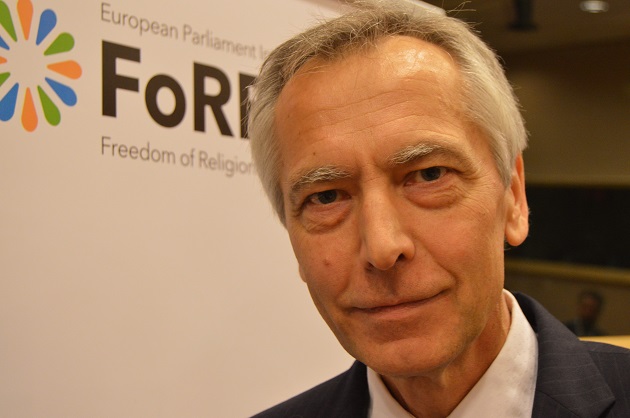 Ján Figel, the Special Envoy for the promotion of Freedom of Religion or Belief outside the European Union. / Don Zeeman

Earlier this year, Ján Figel began his third mandate as Special Envoy for the promotion of Freedom of Religion or Belief (FoRB) outside the European Union.

In a way this sounds more impressive than it is. Not because of Ján Figel, but because of the limited role that was given to the envoy in first instance. Up until now the consecutive mandates have been only for one year each, and the the Special Envoy has to work with limited resources.

Nevertheless, appointing someone with the specific task to work on Freedom of Religion or Belief in the EU was an important step. It showed the willingness of the European Parliament to get involved in matters of religious freedom worldwide.

A SLOVAKIAN WITH LONG EXPERIENCE IN EUROPE

Choosing someone with the capacities of Ján Figel was also remarkable. In his homeland Slovakia he served as the State Secretary of the Ministry of Foreign Affairs. On an European level, Figel was Commissioner for Education, Training & Culture. He is therefore very familiar with the European institutions and he knows his way around in the Brussels offices.

Still, it was not easy to defend his new position in relationship with other agencies, like the External Action Service (EAS). Also, the mandate had potential conflicting interests with the EU Special Representative for Human Rights. 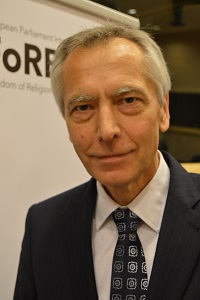 Question. Mr. Figel, what is your impression of the last years?

Answer. The first year was exploratory, during the second we could start working on our priorities, networking and real missions. I visited several difficult territories like Iran, Sudan, but also Pakistan. We have started either new projects or new approaches for the sake of persecuted minorities.

Q. How important is the freedom of religion or belief?

In its origin, the European Union (‘the Common Market’) was an economical co-operation. The influence of the EU in this area is still very big, worldwide. The GSP, the Generalised Scheme of Preferences (which allows vulnerable developing countries to pay fewer or no duties on exports to the EU) is an important tool to approach human rights and the freedom of religion. When negotiating with countries hoping for financial benefits, these should be related to the status of human rights.

A. It makes a lot of difference, a lot of potential influence in our relations and policies. I was refused twice before I could visit Pakistan. My first visit generated a second, showing unexpected openness by religious leaders and state figures to speak about and to work on pluralism. That is a very important objective, not only for Pakistan. All human rights activists whom I met during my visit agreed that the GSP is a human rights mechanism which can deliver a real progress in this area. 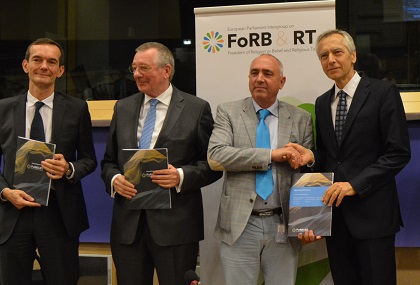 THE ROLE OF BUSINESSES

Financial interests can be used as a means of pressure. Promoting religious freedom is not only a specific task for church leaders or politicians. Ján Figel sees possibilities for trade partners as well.

A. I would like to encourage companies, businesses, to promote religious freedom and diversity at the workplace. That is very important for the people in the company, but also for the world we are living in. My message was and is: we need to live in diversity, not only exist in diversity. This is a noble responsibility since we are all different.

Ján Figel actively searches for partners in religious and philosophical organisations. And he is looking not only for declarations, bur for clear examples everyone can see.

A. I like to mention last year’s meeting between two top leaders of two major religious communities: Pope Francis and the Grand Mufti of Al-Azhar, in june 2017 in Cairo. This was a historical event in times of growing divisions, hatred, radicalization and genocide. Nowadays people don’t read much documents and don’t follow texts like encyclicals or fatwas, but they see the pictures and hear the messages of their religious leaders and they see them work together in a spirit of brotherhood. That is very important, that is encouraging.

Q. What are the greatest threats in advocacy?

A. The worst allies of evil are three: indifference, ignorance and fear. If we don’t care, if we don’t know or if we are scared. We have to tackle this with opposite: engagement, education and courage. Real courage is one of the most important ingredients for freedom to survive.

The appointment of a Special Envoy was originally one of the main goals of the FoRB Intergroup, a group of like-minded MEPs (Members of the European Parliament) dedicated to the promotion and protection of freedom of religion or belief outside the EU. Today, the Intergroup is hoping to see a further development of the position of the Special Envoy. In their opinion, the mandate should become the central focus for the EU’s external policies in regard of the role of religion or belief and religious and belief organisations in third countries.

The Intergroup also wants to see a better co-operation between the Special Envoy and the Special Representative on Human Rights, in a way that they can strengthen each other.

A. I hope that after 2019, when the elections will be held, we will see a strong political legacy for the next five years. It is a bit sensitive to say this from my site, but it is important to institutionalise the role of the special envoy. My role is more visible now, there is trust between institutions like the Commission and EAS as well as in the Parliament. There is growing support for continuity. However, this is not about Ján Figel, but about the European Union which cares or not, which continues in better conditions to promote freedom of religion or belief for everyone, everywhere. It cannot remain on the basis of an annual mandate, but it should be better structured, more anchored for the sake of institutional co-operation and for the sake of those who suffer. We can and we should help them.