After a whiteout demonstration, Bulgarian evangelicals call off protests for Christmas

Amid Advent worship services, Bulgarian evangelicals ended their civic rallies with a workday vigil on Thursday and a snow-flurry street protest on Sunday. 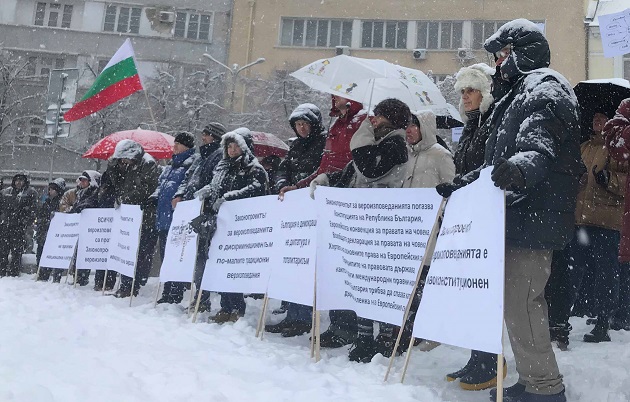 Under the snow, evangelical Christians protested in Sofia for the seventh Sunday in a row against amendments to the Religious Denominations Act, December 16. / Vlady Raichinov

For the seventh time this fall, Bulgarian Christians publicly challenged proposed restrictive amendments in the nation’s Religion Denominations Act. Amid Advent worship services, Bulgarian evangelicals ended their civic rallies with a workday vigil on Thursday and a snow-flurry street protest on Sunday.

After being pushed at first reading in early October, the amended Religion Denominations Act is now in a procedure of reviews in parliamentary committees and piling up of legal analyses. The lawmakers have not stated clearly when exactly they intend to open the second reading of the legislation, but it seems like it is being postponed for 2019. 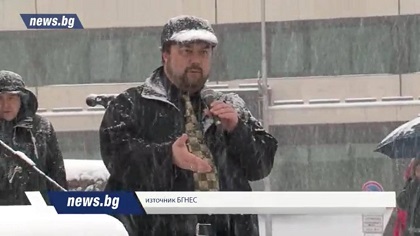 During the past few weeks, some politicians in Bulgaria have attempted to sway public opinion by claiming that they have made certain concessions from the originally intended restrictions and that now religious groups in the country are on board with the updated proposals.

On December 5, the chairman of Bulgaria’s largest political party GERB Tsvetan Tsvetanov announced on his Facebook profile from Washington DC that he had had a cordial conversation with Daniel Lawton, director of the US Department’s Office of Central European Affairs. During that meeting, Tsvetanov claimed that an agreement has been successfully negotiated with representatives of religious organizations and that every point of disagreement has been cleared out. “There are no texts in the new legislation that might cause concerns for invading into religious freedoms,” promised Tsvetanov to the US diplomat.

In reality, however, this is not true. No agreement has been reached with Bulgaria’s religious groups. On the contrary, faith communities continue to share a deep dissent with the lawmakers’ initiative. Since their own government is turning a deaf ear to their emphatic protests, Bulgarian Evangelical leaders have reached out to every possible international legal rights organization expressing serious concerns that the state is inappropriately and unlawfully meddling with church affairs.

In the meantime, other Bulgarian politicians expressed frustration over the growing international pressure on the government. On a December 4 talk show, Deputy Prime Minister Krassimir Karakachanov expressed an angry fixation to “fight a fierce battle” for installing the restrictive legislation. Three days later, MP Atanas Stoianov, representing the main political party pushing the new law, zealously claimed that his group was committed and intentional on continuing “to fight for the new Denominations Act”, and are planning to submit it for second reading early next year.

None of these politicians went on record to clarify whom they were fighting against.

ISSUE PRESENTED TO COUNCIL OF EUROPE, THE EUROPEAN PARLIAMENT, AND THE UNITED NATIONS

On this backdrop, the situation with the new legislative initiative was reported to the Council of Europe, the European Parliament and the United Nations.

On November 29, advocacy group ADF International filed a request with Council of Europe Secretary General Thorbjørn Jagland to initiate a review of the proposed amendments in Bulgaria’s Law on Religious Denominations. The review is delegated to the Venice Commission, an advisory body of the Council of Europe dealing with problematic legislation acts. Lorcán Price, legal counsel for ADF International, added: “As the ECHR has ruled in the past, the government should not engage in “picking favorites” when it comes to churches.”

On November 30, Dr. Liviu Olteanu, general secretary of the International Association for the Defense of Religious Liberty (AIDRL) from Switzerland spoke at a UN Forum on Minority Issues in Geneva. “In these days, the Bulgarian Parliament prepares a law on religious freedom. And if the law is voted, it can affect religious minorities as: Evangelicals, Baptists, Seventh-Day Adventists, Pentecostals, Catholics, Jews, Muslims and others”, Dr. Olteanu said. “I ask the UN Special Rapporteur on Minorities, the European Union, all European countries to use all diplomatic tools, asking urgently Bulgaria to adequate the prepared draft of “religious freedom law” according the UDHR art.18, the ICCPR art.18, and the EU Guidelines on religious freedom.”

A few days after this address, Dr. Olteanu also sent a note to the Bulgarian authorities asking for a withdrawal of the problematic legislation.

In early December, the case was also presented before the European Parliament by Rev. Dr. Daniel Topalski, representative of the Bulgarian Evangelical Alliance in the EEA. Pastor Topalski explained the problematic issues at a Conference of European Churches seminar held in Brussels on the occasion of UN’s celebrating 70 years since the signing of the Universal Declaration of Human Rights.

Preceding this panel seminar by a week, several MEPs from the European Christian Political Movement also wrote to Bulgarian officials raising strong objections to the case.

Given the lawmakers’ silence, on December 13, evangelical pastors held an all-day vigil at the service entry of the nation’s parliament. This was their first protest organized on a working day. The purpose was to draw the politicians’ attention on the damaging effect of the proposals, while they were engaged in their daily responsibilities.

Starting from 8 AM, until the end of working hours, they played Christmas and worship music with loudspeakers aimed at the Parliament building. Arriving at work, walking out for a lunch break and leaving for home, every Bulgarian MP that day encountered the pastors and their posters against the law amendments on the backdrop of Christian praise and worship. 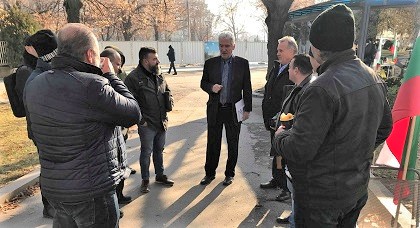 In late morning, Krasimir Velchev, chairman of the parliamentary Committee for Religious Denominations and Human Rights, stepped out and engaged in a one-hour conversation with the pastors. He claimed that their voice has been heard and that the law would not contain any of the troubling issues. Yet he failed to produce any written document with the lawmakers’ commitment. The pastors were left with the impression that he is simply trying to cool off their determination to mobilize evangelical Christians for more street rallies.

On Sunday morning, December 16, for the seventh time the churches in Bulgaria’s capital came out for a protest vigil. This time, the weather was severely unhospitable for an outside meeting. A snowy blizzard had engulfed the city that morning, and by early afternoon the city center traffic was almost paralyzed.

Yet a hundred and fifty people gathered under the snow at 1:30 PM for their routine protest in front of the Parliament building. This time, they only stayed for about an hour in the snowstorm for a series of public declarations and a time of prayer. The rally on the streets of Sofia afterwards was cancelled.

Despite the bad weather, the evangelical Christians remained faithful during this hour, knee deep in snow, barely protecting their faces from the gusts of wind and the cold snow. They raised hands in prayer, sang songs of worship and stood strong holding posters reading: “The new bill is discriminatory to smaller faith groups”, “Democracy, freedom, faith”, “Keep the church autonomous from the state and vice versa”, “This new legislation is resuscitating Communism.”

This time, the protest also included a Christian band that led the crowd in several songs of praise, ending with what had become a hymn of the protests, “God Save Bulgaria.”

These statements comprise a total of 215 pages of legal arguments that need to be taken into account by Bulgarian parliamentarians when it comes to considering the law for second reading. “Has there ever been another law proposal in the history of the Bulgarian Parliament that would trigger so many negative responses?”, asked one of the pastors speaking from the snowy platform.

SUMMARY OF THE PROBLEMATIC PROVISIONS

In a press release sent earlier to Bulgarian media, the protest organizers wrote:

The law proposal introduces heavy restrictions in the internal life of Bulgarian churches. It installs state control over religious life and is a serious breach of the nation’s Constitution, as well as of basic human rights like the freedom of belief, the freedom of speech and the freedom of assembly.

This is a list of our reproofs of the new bill:

2. Illegal use of voluntary self-identification data collected during Census ‘2011;

3. Deeming smaller religions as “terrorist threat” only because they are less than 1%;

4. Loading the Directorate of Religious Denominations with responsibility to establish terrorist activity without any competencies for that;

6. Nullifying academic degrees in theology defended outside of Bulgaria;

8. Ban of distribution and propagation of religious literature;

9. Restriction over the free ministry of non-Bulgarian missionaries;

10. Requirements of service license for pastors and ministers;

11. Filtering church donations from outside Bulgaria;

13. Prohibition of worship activities outside of a designated building;

14. A threshold of 3,000 members for a judicial recognition of a denomination.

Despite all oral promises given by the lawmakers to ease those restrictions, we are firm in our demand that the Act is withdrawn completely from the Parliament’s agenda. In a sphere so sensitive as personal faith confession, one cannot change laws with such a negligent and incompetent attitude.

We express our most strong disagreement with the suggested amendments and we require that they are all cancelled immediately. This is our last protest for 2018. However, unless the law proposal is withdrawn, we will continue our protest in January.

Published in: Evangelical Focus - europe - After a whiteout demonstration, Bulgarian evangelicals call off protests for Christmas