The 2019 European Freedom Network conference will be held in Italy. “God has used many instrumental Christians over time to address the issue of slavery”, says Leanne Rhodes. 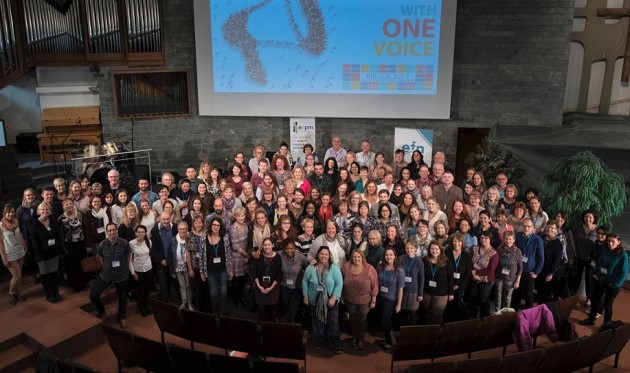 Attendants of the 2017 Bridge conference organised by the European Freedom Network in Berlin. / EFN

Experts, activists, social workers and others will attend the 5th major conference of the European Freedom Network, a movement tha unites Christians who aim to end human trafficking.

The 2019 Bridge conference will be held May 20-24 in Pescara (Italy). Members of partner organisations from more than 40 countries are invited to attend a conference that will focus on networking and finding common strategies and solutions.

In Italy, “human trafficking is exacerbated by the refugee crisis that Italy has and continues to face”, Leanne Rhodes, member of the EFN committee, told Evangelical Focus. “There are organised crime trafficking links between Nigeria and Italy seeing many women being promised work in Europe only to find that work to be forced prostitution”.

Members of EFN will discuss ways to “change the story of slavery in Europe” through plenary sessions, roundtables, worshops and interactive sessions.

Question. The theme of this year is “Change the story”. Why?

Answer. “Change the Story” is the theme this year for EFN’s Bridge conference. To change the story of human trafficking and end slavery in our world today is going to take work with many different players, from the people groups that are often victimised, to those caught up in sexual addiction, from the general public to our government and authorities and from traffickers to the brave survivors of human trafficking.

Our aim is to explore how all these players interact and what work can be done to either support or counter act them in order to see human trafficking stopped in our lifetime.

God has used many instrumental Christians over time to address the issue of slavery. There is Moses from the Bible, working to free the Israelites from Egypt as well as modern day people known for their faith such as William Wilberforce, known for the abolition of slavery in most of the British Empire, to Josephine Butler who was called the patron saint of Prostitutes in the UK and Major Alida Margaretha Bosshardt from the the Salvation Army for her work for in the red light district in Amsterdam. Here at EFN, we believe we are called to continue this work and change the story of slavery in Europe.

Q. What can you share about the situation of trafficking in Italy - the country that is hosting the conference this year?

A. Human trafficking is exacerbated by the refugee crisis that Italy has and continues to face. Many vulnerable refugees have come across traffickers on their pathway to Europe and have fallen prey to their tactics, ending up in both forced prostitution and forced labour. Unfortunately this demographic includes unaccompanied children.

There are organised crime trafficking links between Nigeria and Italy seeing many women being promised work in Europe only to find that work to be forced prostitution.

As a part of the trafficker’s recruitment process they will get the women to perform a “juju” curse or voodoo ceremony where they agree to be silent about how they came to be in Europe. These women are then afraid to ask for help or report to police when they find out what their work really is as it will bring down curses on their family. It takes a spiritual response to change this mindset.

Q. Could you highlight two or three speakers that will attend conference?

A. This year we have asked a number of speakers to our Bridge conference in order to both build expertise and challenge our partners in how we address the issues of human trafficking and commercial exploitation across Europe.

Sarah Adeyinka will be joining us to share from her vast experience and research on working with people that have been trafficked from Africa.  Sarah has spent time aboard rescue vessels operated by Doctors without Borders working to identify and intercept women being trafficked.

Dr Glenn Miles will be exploring the ‘Dynamic of Sexual Addiction’.  This is a key area for the anti-trafficking sector to understand in order to bring human trafficking to an end. Pornography use and the follow on effect of sexual addiction are key drivers of why sex trafficking is a thriving industry today.

Miki Kamberovic from Roma Networks will be helping our partners to understand the Roma community and how to build services that will work with this often targeted people group.  Kamberovic is Roma himself and clearly communicates both the challenges and positive sides of the Roma community.

Q. How many organisations are involved in EFN in Europe at the moment, and how are they working together?

A. EFN is made up of 469 partners from 258 organisations across 43 countries and growing daily. Our partners work together to coordinate cross border services for survivors, to collaborate on projects that are bigger than our individual organisations and to speak as one voice on anti-trafficking work in Europe.

Q. Now that the EU elections are approaching, what demands would you have for Members of the European Parliament regarding the issue of sex trafficking?

A. In light of the approaching EU elections, EFN and its partners would ask each member of the European Parliament to explain how they are actively carrying out the EU Directive 2011/36/EU that they have already agreed to and what resources they would be allocating towards this.

Five years ago, the European Parliament voted to urge all Member States to punish the clients of prostitution but not those actually working in prostitution (the Honeyball Resolution). This policy works to reduce prostitution and make it unprofitable for human traffickers. Will MEP candidates campaign in their nations for such a policy?

EFN will be encouraging its partners to be in contact with their elected members for follow up as well as actively submitting detailed review of what they see on the ground. Human trafficking is at an epidemic level with an estimated 3,257,000 victims in Europe and needs to be on the priority agenda of every government.

Published in: Evangelical Focus - europe - “Human trafficking needs to be on the priority agenda of every government”