The Foreign Affairs Office releases the long-awaited Independent Review on Persecuted Christians. It was commissioned by Jeremy Hunt, who could become the next Prime Minister. 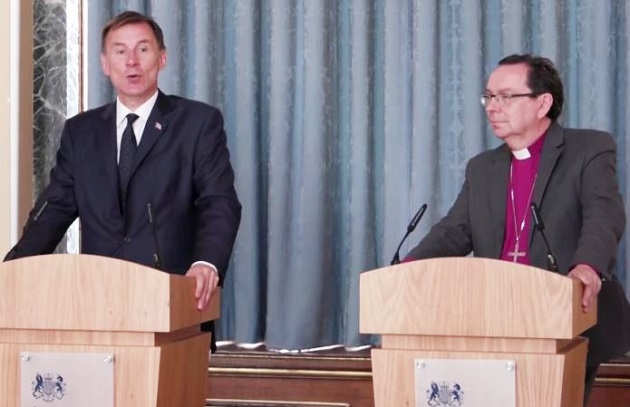 The report was presented in a press conference with Foreign Affairs Secretary Jeremy Hunt, and Bishop of Druro Philip Mountstephen. / Video capture Youtube

An official report about the persecution of Christians in the world, commissioned in December by the United Kingdom Secretary of Foreign Affairs, Jeremy Hunt, has now been released.

The report is signed by Rev. Philip Mounstephen, Bishop of Truro (England), who has worked with a team consisting of “a carefully balanced ‘tripartite alliance’ of FCO officials, secondees from NGOs with great experience in the world of Freedom of Religion or Belief (FoRB), and independent members”.

Christian organisations Open Doors, Aid to the Church in Need, Release International and Christian Solidarity Worldwide were included as partners.

The report responds to secular groups who have tried to relegate religious freedom as a second-class human right: “Freedom of Religion or Belief is perhaps the most fundamental human right because so many others depend upon it”.

“Given the scale of persecution of Christians today, indications that it is getting worse and that its impact involves the decimation of some of the faith groups oldest and most enduring communities, the need for government to give increasing priority and specific targeted support to this faith community is not only necessary but increasingly urgent”.

The document clarifies that the focus on Christianity “is not about special pleading for Christians, but making up a significant deficit (…) It is an equality issue. If one minority is on the receiving end of 80% of religiously motivated discrimination it is simply not just that they should receive so little attention”. The report is also about being sensitive to discrimination and persecution of all minorities”.

The document gives a list of recommendations to help the United Kingdom government better fight the persecution of Christians worldwide.

“At a time of significant structural change in the UK’s diplomatic relationships it is essential that Freedom of Religion or Belief remains at the heart of the priorities of UK Foreign Policy”. This means that “the Foreign Office must resist any attempt to allow bilateral relationships to prioritise other issues at the expense of FoRB”, the document says.

The report says personnel of the Foreign Affairs Office should be better trained in “religious literacy”. Religious freedom should be studied in intersection with other Human Rights to better approach complex realities like gender violence or forced marriage.

Through a better engagement with the United Nations Security Council, the UN Human Rights Council, the OSCE, the Council of Europe and the Commonwealth, the United Kingdom should “aspire to be the global leader in championing FoRB”.

It also calls to “greater funding” for combating persecution of Christians and name the phenomenon more clearly. The government of the UK should “ensure that there are mechanisms in place to facilitate an immediate response to atrocity crimes” and “be prepared to impose sanctions against perpetrators of FoRB abuses”.

The report also criticises the “significant cultural knowledge deficit in the awareness and practice of religion in society in the United Kingdom which witnesses have suggested is increasingly evident in the culture of the Foreign Office Network”.

It adds, “given the centrality of religious belief to the vast majority of the world’s population and communities this poses a particular challenge for British diplomats seeking to operate between these two worlds”.

Secretary of State for Foregin Affairs Jeremy Hunt commented on the report in a special press conference.

“I'm not convinced that our efforts on behalf of Christians have always matched the scale of the problem, or indeed have reflected the evidence that it is Christians who frequently endure the heaviest burden in persecution”, he said.

“Perhaps because of a misguided political correctness or an instinctive reluctance to talk about religion, British governments haven’t always grappled with this problem”, the member of government pointed out.

Hunt is in a race with party colleague Boris Johnson to lead the Conservative Party. If he wins, he would become the next Prime Minister of the United Kingdom, in replacement of Theresa May. As head of government, he would “accept the recommendations [of the report] in full”.

Hunt ended by saying: “As the Christian doctrine of original sin reminds us, the capacity for wickedness is inherent in the human condition. We'll never be able to extirpate anti-Christian bigotry but nor must we shrug our shoulders and walk on the other side of the road”.

A number of Christian leaders reacted to the publishing of the report. The Director of Advocacy of the Evangelical Alliance United Kingdom, Dave Landrum, said: “It should make this issue a priority, not least because the freedoms to hold, express and change religious beliefs are the bedrock for all our other human rights and civil liberties. If religious freedoms diminish so will everything else. In this endeavour the Foreign Office can certainly count on the prayers and support of the fast-growing evangelical community across the world”.

Landrum said “evidence was presented that there is often very poor follow-up by diplomats to project proposals inititated by the 'minority' Christian community: that is to say, in many cases, Pentecostal and evangelical groups who are also significantly poorer thant those belonging to mainstream denominations”.

The leader of the Anglican Church, the Archbishop of Canterbury Justin Welby, also greeted the report.

Today the Bishop of Truro @pmounstephen publishes his powerful independent report on #PersecutedChristians. Let’s make this a prompt for renewed prayer. May our suffering sisters and brothers know respite, safety and freedom. May governments act. May there be peace. #FORB