Lesbos: 12,000 quadruple the capacity of the Moria refugee camp

The fields around the Greek the refugee camp are “oversaturated”. Pau Abad, a volunteer on the ground, shares about the “hopelessness” of the hundreds of families who continue to arrive every week and will face “a very tough winter”. 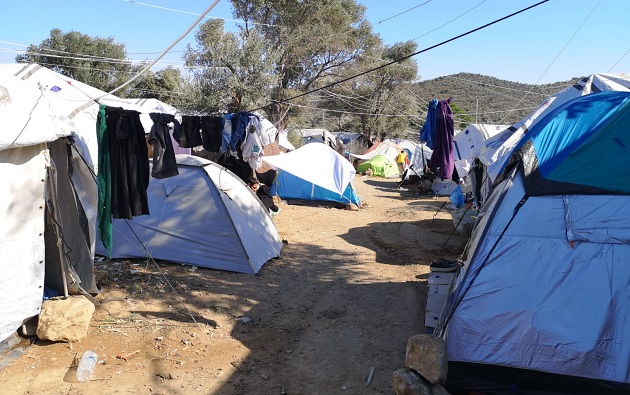 Tents to allocate families in the fields outside the refugee camp of Moria, in September 2019. / Pau Abad

Almost 12,000 people are in the Moria refugee camp in Lesbos (Greece) and in the fields nearby, in what is one of the most critical situations since the beginning of the crisis in 2015.

“There is a great need for volunteers, no matter if they come for just some days”, Pau Abad, a worker of GAiN Spain who is in Moria these days with a group of volunteers, told Evangelical Focus. They have travelled to Lesbos to serve with EuroRelief, the platform that unites the efforts of several NGOs.

New families arrive every day to a completely “oversaturated” camp. Both the physical presence and hygiene materials are needed. Lesbos is no longer in the news, but the situation right now is “very difficult”. 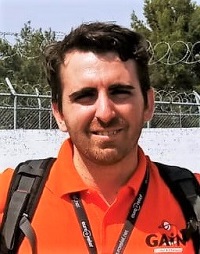 Question. What are you doing in Lesbos?

Answer. We are basically helping with accommodation, providing tents for new families. We do it with EuroRelief, which is the NGO that is responsible for accommodation and other services. Here in the camp of Moria there is a chaotic situation, due to the large number of people who have arrived during the summer.

There is a great need for volunteers, even if they come only for a few days, to respond to needs. The fields outside the camps are oversaturated, and those who come on their own, young men and single people with no family, have to find a place on the floor, because there is simply no more space.

Q. How many people are in the camp right now?

A. The number of people in Moria changes day by day, because people keep arriving. The Greek government, from time to time, decides that some go to Athens. But right now there are almost 12,000 people in Lesbos, the camp is overflowing and the exterior part, where families are also welcomed in tents, is huge.

In March and April, there were between 5,000 and 6,000 people at the camp. The good weather in summer is what brought the current figure of refugees.

The Moria refugee camp is designed for a capacity of 3,000 people - we are quadrupling the capacity that was initially thought for this place, meant to be a Greek military base.

With the arrival of autumn, the number of people here will probably decrease, but there will be more people than last winter. We had a cold night and we have already seen people with coughs and colds.

UNHCR and all the organizations that are here will try our best to alleviate them, but in winter this can be very hard again. Most people here are from Afghanistan, but there are others who come from Africa. There are still many people from Iran, and families from Syria, although not many. The figures look a lot like 2015 [when the crisis broke out]. So many groups have come in the days and nights of this last month.
Four days ago, a group of 450 people arrived in just one night, which is outrageous. The average is between 100 and 200 people every night, and usually in September the number of people who arrive on this island falls.

Q. There are many who live and sleep outside the camp. In what conditions?

A. Moria has two parts. The inside, and then the whole part outside, which are private lands, olive fields that have been handover to the Greek government. The government, in turn, has given the managemet to NGOs such as EuroRelief.

There is no space inside, and the people who have been here before, tell us that there are two or three times the number of makeshift tents and shelters in the area outside here. You can imagine the conditions...

Yesterday we had to divide an 8 people tent in three parts, to accommodate three different families, which together were almost 20 people. They were two Sunni Afghan families, and an Iranian Shiite family [two opposite branches in Islam]. We could not do anything else. They are very tight and with no privacy.

EuroRelief is running out of tents, and it is a serious problem. People receive food, hygiene products and blankets for the night, although not as many as we would like, and that makes people complain. When there is a forecast of rain or cold, we do not know to what extent what we can offer is sufficient. 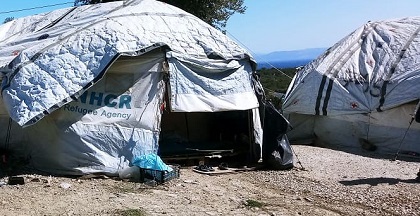 Q. Is the situation in Lesbos no longer “trendy” in the media? Do you believe people in Europe really don't know what is happening there anymore?

A. It is true that it is not in the news anymore, although the situation remains very real.

It is true that in the last 2 years the number of people who had arrived had greatly decreased, due in part to the agreement with Turkey, which had more control over those who try to pass on ships.

According to experts here, Turkey has been in an election season that has not been favourable for the Erdogan government, partly because the refugee situation has been a cause of discontent there. We think that Turkey would be looking to get rid of the refugees burden in the country.

The reality is that during summer there have been massive arrivals in Lesbos that were not remembered since 2015.
Given that the number has been increasing since June, it is surprising for me that this was noin the news. It seems incredible that we need a photo of a dead child on the shores of Turkey to raise awareness, which is very sad.

Two nights ago, I was in the “new arrivals” area, distributing blankets to those who did not yet have them. I met a man who explained that he had just lost his baby on the way from Turkey. He told me this in a broken voice and a lost look. Then I could verify that it had indeed been that way. It is a very hard reality. I imagine this man, who dropped the baby into the water... and there he was. I can't imagine what should happen through this person's head, and if he will be able to explain the news to his wife, who stayed in his country. How do you move forward, without hope, and with the plans totally truncated?

Q. How do you see the mood of the people and organizations that are working in the camp?

A. Organizations, such as EuroRelief, are supersaturated. For example, they are being forced not to offer accommodation to young or single men who arrive, prioritizing families.

It is a very frustrating reality, both for NGOs and for volunteers. And we only offer families a tent and sleeping on the floor, there is no more. Apart from hygiene products and food that are distributed every day, the resources in the warehouse are scarce, because this flow of people was not expected.

As for the NGOs that work in the medical part, they have huge queues. It is the same with food, there are lines 2 and 3 hours before it will be distributed.

Obviously, it is a bit of chaos for everyone. Everybody is receiving food at the moment, because there is a plan for each person who arrives, but it is clear that the conditions in which people are staying and the quality of the products that can be given are much lower than it has been in recent years. 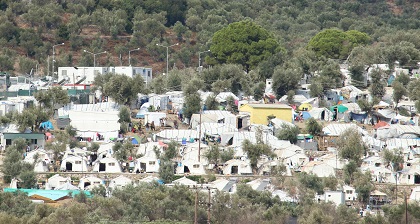 Q. As a Christian, what are your thoughts and feelings when you see the situation of these thousands of people in extreme situations?

A. Every day I have been here I have had the same feeling: God wants us here. God wants us in a special way in places like this. I think of the parable of the good Samaritan: that person lying on the ground, not only physically, but also emotionally and perhaps spiritually. It is a situation of despair and Jesus is telling us that this is our greatest expression of love for our neighbor.

Obviously, there are many situations of injustice and inequality in the world, but the situation that these people are going through in the camp of Moria is dramatic and many are literally lying on the ground.

On the other hand, I am glad that there are quite a few Christian organizations and Christian workers or volunteers that we are meeting here. This motivates me to think that we care. We have the possiblity to show people we meet that there is hope.

I think God wants us here, and in other situations like this. Where there is such a great need, we Christians cannot be absent.

Q. How is it possible to get seriously involved in helping refugees in Lesbos?

A. Products are starting to run out, and there is a need for new aid containers to be sent. Gain will continue to do so, from his offices in Europe and elsewhere. Specifically, in Spain, where I am, we are going to start a campaign to collect hygiene products, as we did last year.

We start this campaign in October, and it coincides with this great need that we have been able to see on the spot: products here are scarce and urgent. We will also collect money to finance these shipments, something very necessary at this time. I encourage people who want to get involved to do so in these two ways. In fact, finding financial aid to ship containers is often more complicated than finding communities, people, churches, who join in giving products.

Another way, obviously, is getting involved personally and coming here. It is interesting to what extent the volunteers in Moria play a fundamental role in what is the everyday life in the camp, and more in situations like this.

In other countries, such as the Netherlands or the United Kingdom, our NGO is sending groups almost every month. It is a fairly important to know how to speak English to come here as a volunteer. Anyone who reads this and has interest, just contact us.

There is a rotation system for volunteers, so that, as soon as you arrive, the first day you are already involved with tasks. I encourage people to get involved in person and see with their own eyes the reality here.