Now the British and European Parliaments will have to back the document. 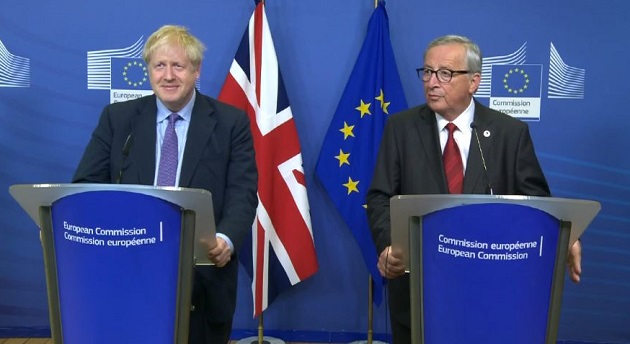 Two weeks before the deadline of 31 October, a Brexit deal has been announced.

The President of the European Commission, Jean-Claude Juncker, and the Prime Minister of the United Kingdom, Boris Johnson, announced today that their negotiating teams have reached an agreement that could avoid the feared ‘no-deal Brexit’.

Juncker posted on social media the letter he had sent to the President of the European Council, Donald Tusk, who is chairing a meeting of the European heads of government in Brussels (Belgium).

Where there is a will, there is a #deal - we have one! It’s a fair and balanced agreement for the EU and the UK and it is testament to our commitment to find solutions. I recommend that #EUCO endorses this deal. pic.twitter.com/7AfKyCZ6k9

“As regards to the Withdrawal Agreement, negotiations focused on the Protocol of Ireland/Northern Ireland and sought to identify a mutually satisfactory solution to address the specific circumstances of the island of Ireland”, Juncker wrote. The future relationship between the UK and the EU was also on the table, to “adjust the Political Declaration in a way that reflects the different level of ambition now sought by the Government of the United Kingdom for the country’s future relationship with the European Union”.

The rights of EU citizens living in the UK, and UK citizens in the EU, will be guaranteed, in a deal that both sides consider to be “fair”.

The agreement has been endorsed by the European Commission. Its President emphasised that “it is high time to complete the withdrawal process and move on”.

On his side, UK Prime Minister Boris Johnson reacted on social media saying: “We’ve got a great new deal that takes back control — now Parliament should get Brexit done on Saturday”. According to Johnson, “this new deal ensures that we take back control of our laws, borders, money and trade without disruption & establishes a new relationship with the EU based on free trade and friendly cooperation”.

The head of the UK government hopes to “get Brexit done and leave the EU in two weeks’ time”.

The agreement announced today is not final. It will need to be approved by the 27 European Union member states, the European Parliament and by the UK Westminster Parliament.

The main opposition party in the UK, Labour, has already said it will not vote in favour of the new deal. Other parties, including government partner DUP (Northern Ireland’s Unionists) have also expressed their lack of confidence in the agreement. It is therefore not clear that the new deal will pass the test of a divided British parliament.