“We do not take a 13-year-old boy to a sex-shop, not anything goes in the digital world”, French President Emmanuel Macron said in a speech at UNESCO. 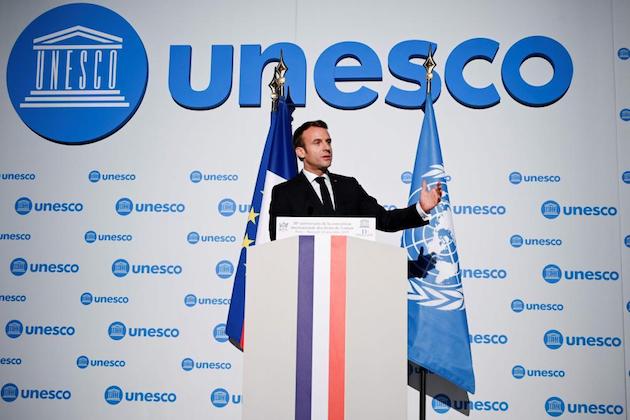 Emmanuel Macron during his speech at UNESCO celebration of 30th anniversary of Convention on Rights of the Child. / L'Union

The French government has approved a mandatory age control for pornographic websites, in order to prevent minors under 18 from accessing its contents.

“We do not take a 13-year-old boy to a sex-shop, not anything goes in the digital world”, the French President, Emmanuel Macron said in a speech at UNESCO celebration of 30th anniversary of Convention on Rights of the Child.

“We will clarify in the penal code that the simple fact of declaring one’s age online is not a strong enough protection against access to pornography by minors”, he said.

The President stressed the importance of this decision because "sexuality is built on stereotypes”.

The measure will give the websites a period of six months “to set up parental control by default”. “I know it hurts a lot of platforms, a lot of digital operators, but if in six months we have no solution, we will pass a law for automatic parental control”, Macron warned.

According to internet security company Metacert, in France alone there are 5.5 million pornographic websites.

AGE VERIFICATION MANDATORY IN THE UK SINCE APRIL

In the United Kingdom, entities such as Christian Action, Research and Education (CARE) had been asking for a regulation to control the access to pornographic websites for years,

“We want the UK to be the safest place in the world to be online, and these new laws will help us achieve this”, Margot James, the Minister for Digital, Culture, Media and Sport, said.

However, the rule only only applies to websites where more than a third of the content is pornographic, excluding any platform that hosts pornography but does not charge a fee, or make money from adverts or other activity.