Swiss evangelical leader and his homosexual father discuss sexuality, Bible and the right to disagree

Influential Swiss newspaper NZZ publishes the dialogue between Samuel Jost and his son Marc, who leads the Swiss Evangelical Alliance and calls to protect heterosexual marriage. 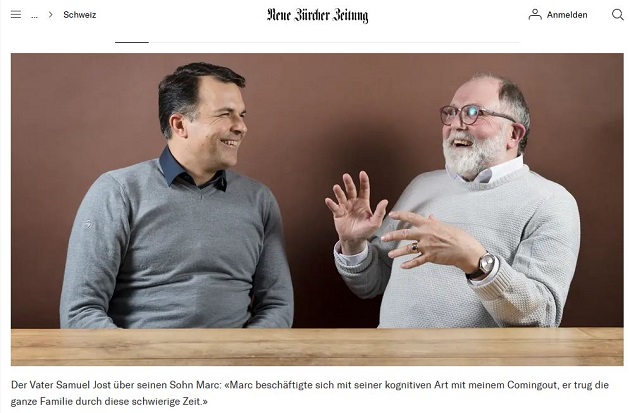 Marc Jost and father Samuel, in an the article published on 21 Juanuary on Swiss newspaper NZZ's website. / Capture nzz.ch

Marc Jost, an evangelical theologian and Secretary General of the Swiss Evangelical Alliance, has agreed to have a public conversation with his father Samuel, who came out as homosexual.

An article published in Switzerland’s most influential newspaper, the New Zurich Newspaper (NZZ) captures the dialogue between two men who have gone through pain but now are able to openly speak about their opposing views on family, sexuality, marriage, and the Bible.

In the conversation, titled “Honour your father, even when he is gay?”, Samuel shares about the pain of admitting his sexual orientation to his wife and children, and the frustration of not being able to change his sexual orientation after trying a conversion therapy, which led him to try committing suicide. He now lives with his gay partner, and says he still believes in God despite having cut ties with the evangelical church he once attended.

Marc shares about the confusion the news of his father brought to the whole family, the collision of his father’s path with his own Christian worldview, and how they now are able to talk openly about the different convictions they still hold on to.

In the article, they also explain how Marc’s own children, brought up in the Christian faith, relate to their grandfather. And how the Biblical command of honouring one’s father and mother applies even when there are deep disagreements.

THE NEED FOR HONEST AND RESPECTFUL DIALOGUE

“I hope that our society is able to protect and care about a respectful and regardful interaction even when there are profoundly different views”, Marc Jost told Evangelical Focus hours after the article was published. “To keep this, we do not need an intensification of our penal code, but values, to be able to see God’s image in the person in front of us”.

The Swiss Evangelical Alliance, which holds to a conservative theological creed, has repeatedly called to protect heterosexual marriage in society. The representative body of which Marc is the most visible leader, has also encouraged Swiss citizens to vote “no” in the upcoming referendum on the inclusion of sexual orientation in the hate crimes law, which, according to the evangelical body, would restrict freedom of expression for churches and Christians who do not actively support homosexual relationships.

The story published in the NZZ had a large repercussion. The same morning the article was published, Marc Jost was contacted by several media, including British broadcaster BBC.

Published in: Evangelical Focus - europe - Swiss evangelical leader and his homosexual father discuss sexuality, Bible and the right to disagree