The German debate around the CDU party is not new. Everywhere in Europe the Christian Democracy is on the defeat. This is a warning for evangelicals as well. 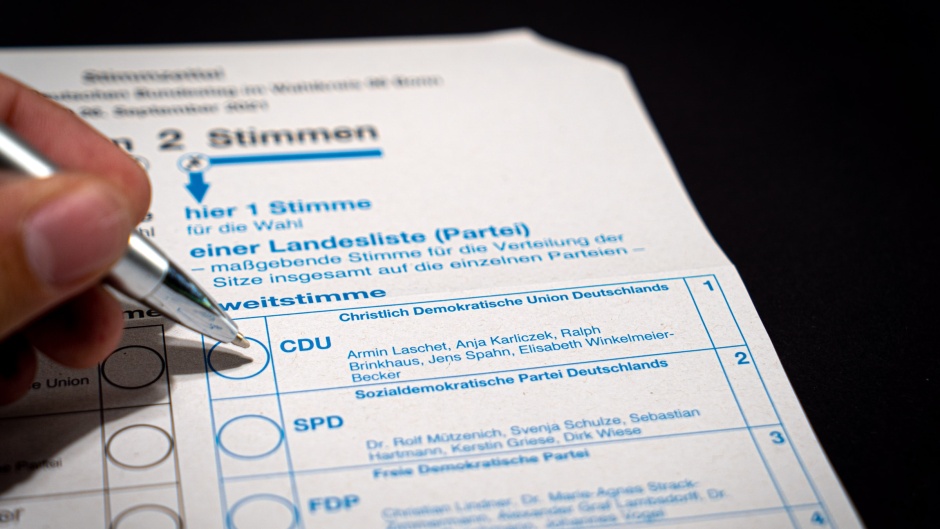 The CDU is one of the main parties in Germany, and lost the federal election after a long time in power with Chancellor Angela Merkel. / Photo: [link]M. Baumeister[/link], Unsplash, CC0.

CDU in search of a new image

The German Christian Democratic Party (CDU) one of the most powerful political parties of Germany after WWII searches for a new image. The Merkel party lost the last federal election, her voters are in their majority old people. The young generation sees no reason to vote for what they call the “old conservative club”. Under the leadership of her new president Friedrich Merz a new start is discussed. One of the suggestions on the table – to drop the C in the party name.

In other countries, Switzerland, for example, the Christlich-Demokratische Volkspartei (CVP) already dropped the Christian in their name in October 2020, calling themselves now “Die Mitte” = “The Middle”.

The German history professor Andreas Rödder, long time member of the CDU, argues, that it is precisely the C in the name of the party which hinders the vast majority of Germans to vote for a party so close to a distinct religious worldview. In a secular society like ours, says Rödder, the religious identity is a major problem for winning the masses to vote for a party. “The time for Christian democratic identity in Europe is gone”, he claims.

CDU is still debating. Influential party leaders fear a complete loss of identity if the name is secularized. Even Muslim members like Serap Güler stem against a change of name. The Christian in the name does not identify a “club for Christians” only but reveals values the party orients her selves and they can be shared by Christians as well as non-Christians, Güler argues.

The German debate is, in fact, not new. Everywhere in Europe the Christian Democracy is on the defeat. Christoph Böhr brings it to a point when he states:

“The ‘C’ is increasingly perceived as a foreign body in a secularized society, as a legacy whose meaning is hardly comprehensible. Fewer and fewer people still understand what is meant by the ‘C’, while for more and more people this ‘C’ is becoming an outright nuisance. For the claim of Christianity is associated with the force of a norm that finds little understanding in an age in which people want autonomy above all else.”

The observers agree that the main reasons for the development lays: (a) in the state of most of Christian churches, especially the mainline churches, who rush from one standalone to the other and have largely lost trust in literally all European societies and (b) the bad performance of the Christian Democratic parties. One commentary of the CDU under the leadership of Armin Laschet brings it clearly to hearing: The “C” in the CDU stands more like for Chaos then Christian.

For Evangelical Christians all of this is a clear warning. Is a Christian orientation in politics soon absent in Europe? What happens when alternative worldviews take over the mindset of people? Will Europe continue as it is today, or soon fall into fragmentation and disunity? How would the loss of Christian identity determine our European future? What can we, Evangelicals do? And after all – does Europe need Christian parties?

Confess our sin and become relevant

The secularized society in Europe is by-an-large a product of un-faithful church. To be a baptized Christian often means nothing. Ever since the Roman-Catholic pope Johannes Paul II called his church and all Christian entities of Europe to start a process of New-Evangelization of Europe, we have become aware of how sick the body of Christ in Europe is. Europe needs a vital and truly sanctified Christian church, Christians who know, what they believe and who live accordingly. Only a changed Christian lifestyle may win our society back to trust us, Christians.

We Christians are invited, to confess our sin and pray that the Lord my cleanse our land. To Solomon, who build the Temple in Jerusalem, God once said:

“When I shut up the heavens so that there is no rain, or command locusts to devour the land or send a plague among my people, if my people, who are called by my name, will humble themselves and pray and seek my face and turn from their wicked ways, then I will hear from heaven, and I will forgive their sin and will heal their land” (2 Chron. 7:13-14 NIV).

Times of plague, despair, war and suffering are also a chance for the people of God to think about their own sin and wrongdoing. They need to humble themselves, confess their wicked ways and God promises, to see dawn on them from heaven and heal their land. No question, God does not say this to those who attack and destroy Israel. With them He will have his own straight talk. He says this to Israel, a victim of the attack. Confessing wicked ways opens ways for heavenly blessing and a healing of land. What a promise!

The church of Christ has lost its credibility – this implies a movement of conversion for all Christians, Evangelicals included. There is no meaning in pointing fingers to the mainline churches. Their bad image makes it very difficult for all of us to evangelize and lead our societies back to Christ. We need a movement of repentance among Christians in Europe. A united movement!

A number of years ago, a delegation of Ugandian Christian bishops invited themselves to the president of Uganda to discuss with him the issue of corruption in his government. The president, himself a Christian, patiently listened to the bishops and after a while turned to them and asked: “Why are you complying? My ministers are all your members. Shouldn´t you teach them the right behavior? Is not your primary responsibility to prepare your members for a godly lifestyle?” Embarrassed the bishops left the presidents palace.

A Christian voice in politics is crucial

European societies have become multireligious and multi-optional in any regard and are caught between extremes. Values determining our peaceful co-existence are under attack. Individual interests determine the political agenda. Where does all of this lead us to?

The Christian worldview gave Europe ones a solid foundation, determined our human rights and democracies. We should not give up on this. Do we need Christian democrats in Europe? I guess – yes, we need them, but only as truly Christian we need them, as a prophetic voice pointing to a vision of a just society as developed in God’s kingdom.

And no, we do not need “democrats” who sacrifice identity for a broader influence. No one will win non-Christians, secularists and adherents of other religions to Christian values, by hiding them under new fancy names. We win people by living an authentic Christian live. Only where people in our societies see the good works we do, they start to glorify our father in heaven (Matt. 5:16).  Jesus Christ invited his disciples to be salt for the Earth and light of the world. In his words, one does not hide the light under a covering, but puts it in the highest place in the city that it may offer light for everyone (Matt. 5:13-15).

The Christian church, therefore, must become, what she is send to, God’s ecclesia called out of the world to accept responsibility for the world (Matt. 16:18). As such she will not withdraw from the daily life of a community, but rather engage in transformation of the community to become a place of good life for all, a place of reconciliation and peace, justice and respect. Some of her members will involve in active party politics, using their channels to promote transformation. But they will never engage in compromising the Gospel and basic Christian values of God´s kingdom.

The Christian identity is for them a non-negotiable foundation. Whatever ways the Zeitgeist might take the party, they will keep Christ first.

Johannes Reimer is professor of world mission and intercultural theology and leads the
Department of Public Engagement of the World Evangelical Alliance (WEA).

7. See more in my book: Johannes Reimer: Missio Politica: The Mission of the Church and Politics. (Carliste: Langham 2017).