Almost 86 years old, Rosa Gubianas still translates articles from English into Spanish, one of her passions. This was a conversation we had in her flat one afternoon. 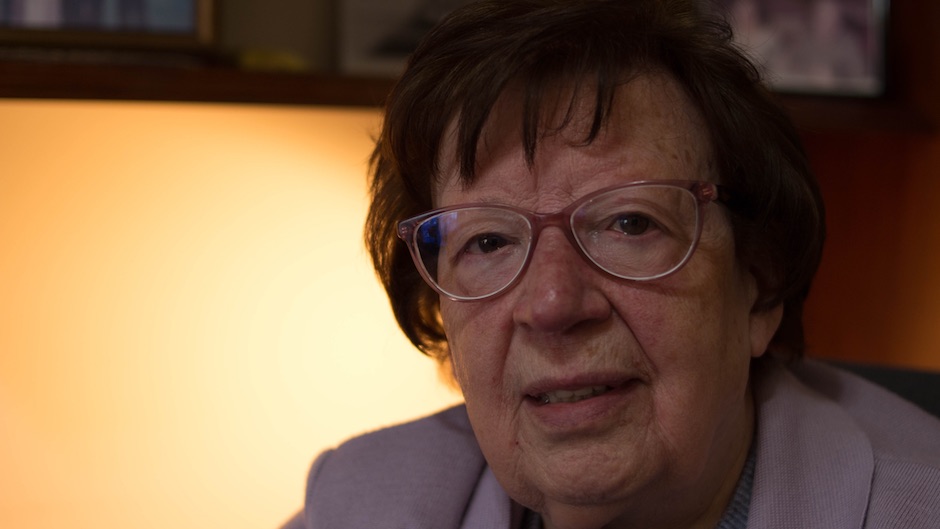 There are places where time is perceived in a special way, from the experience, instead of being reduced to a clock or a calendar hanging on the wall.

This is what you feel when you enter Rosa Gubianas' house, where the paintings, the photos, the books and everything, in general, seems to be a message both from the past and for the future. It makes me think of what one of the best teachers I have ever had said: "History is sublimated to all times and circumstances".

Rosa is an expression of history, all in herself. She has been collaborating with Spanish news website Protestante Digital for years, translating articles from English into Spanish.

It is not difficult to see that she is active and restless, but that at the same time she knows how to enjoy and make the most of what she loves: English, a language she is enthusiastic about, and to which she has constantly dedicated time in her life, combining self-taught learning and specialised courses.

"I have always liked numbers and office work. But I also always loved the English language and would have liked to find something related to it. I have always tried to study English in a language lab, as they used to call it, or in an academy", explains Gubianas.

Just as I enter the dining room of her flat, she is working on the translation of the last article I sent her. The scene is worth looking at rather than analysing it. On the table there are  traces of life. Small footprints of someone who enjoys doing what she does, and who does it with love with a vision for the project.

A red pen, a sheet of paper and the computer. It is a process full of meaning and order. "Sometimes, people who are not from the church ask me why I do the translations. I say it's my ministry", Rosa says. 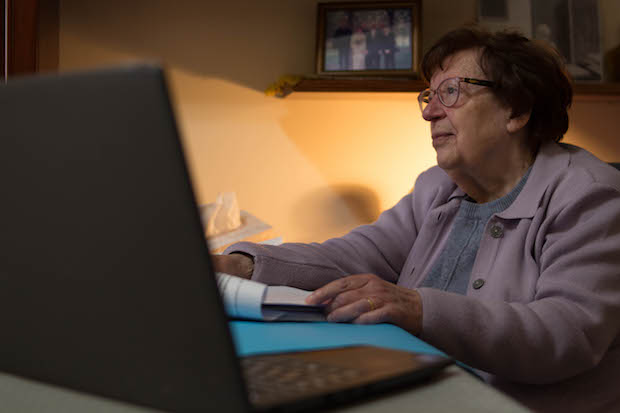 For years, Rosa Gubianas has been faithfully translating an article from English into Spanish every week. / J. Soriano.

What would our world, our journalism, our history and our theology be without those moments in which we know and learn from others, and at the same time serve them in some way?

I turned on the recorder a while ago, when Rosa started to talk about her origins, but now she saw the little red light and stopped to ask me if we were recording.

She was born in 1936 and will soon be 86 years old. "Someday you'll have to find someone else to translate for you", she jokes.

I have just turned 30, and I wonder how she sees me and whether, as we talk, we can bridge the distance that our generations inevitably set. But right from the beginning, it seems that neither of us have remembered our ages today.

She begins to tell me about her origins, which are not limited solely to the faith sphere, but which are inevitably the focus of our attention. "I went to church and did catechism on Sundays. I had always believed in God, but as the years went by I realised that the Catholic church did not convince me. But I hadn't met anyone who was Protestant". 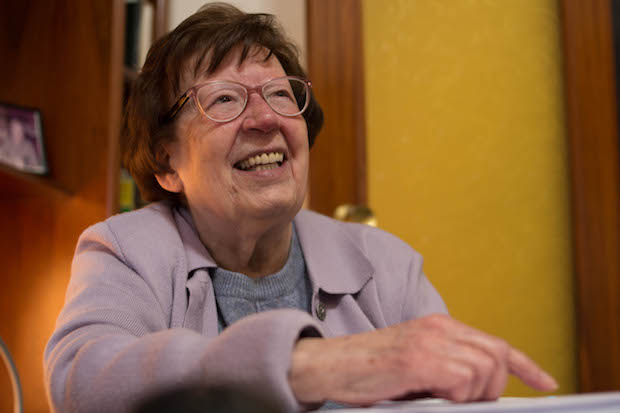 Although she has worked in office work all her life, her passion is the English language. / J. Soriano

"Among my friends we simply said that they didn't believe in the Virgin Mary or the saints, but nobody explained anything else. I was living in Sant Cugat del Vallès and I went to a parish there, but I didn't find it very spiritual. They only talked about things that were very good, but to me they seemed like a kind of humanism", she says with a gesture of dissatisfaction.

Rosa started to work at the age of 14 and has not had an easy life: "In 1980, a company where I had been working for 25 years closed down. Then I found a part-time job in another company and there I met the man who would become my husband, Jaume Tutusaus, who was an evangelical”, underlines Gubianas.

She picks up her wedding photo from the shelf and looks at it. "We were so young here", she says, smiling. Then she takes out three books on graphology written by Jaume, who was an authority in this field, even internationally recognised.

"But before him, I met a girl who was an evangelical and who was very involved with an NGO. She told me about her church and it caught my attention. Later, I found out that another girl I had contact with was the daughter of a pastor from Sant Cugat del Vallès, and she invited me to go to some conferences. In the end I started to attend the services and I was baptised in that church", she recalls.

Her beginnings in translation are related to graphology. "Jaume used to receive a magazine in English about graphology, and once he asked me to translate an article for a local newsletter. I did it first on paper and pencil, consulting a printed dictionary, and then I put it on the computer. And that's how I started translating”. 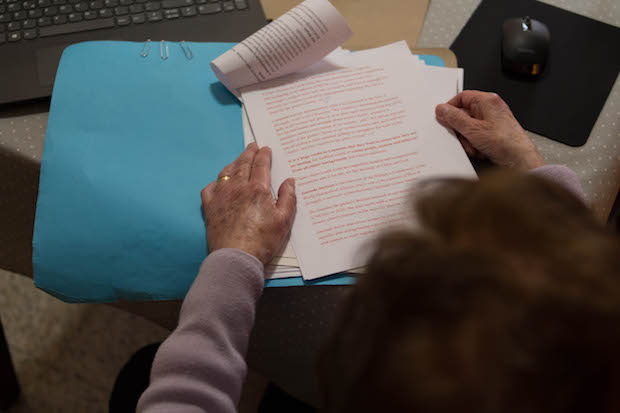 By then, Rosa had also participated in some computer courses. That first article on graphology was the entry point to her later collaboration with the Spanish Evangelical Alliance (AEE). "Pedro Pérez [then a board member of the AEE] told me about some contents he had to translate and I offered my help. I also translated content related to the United Week of Prayer", she recalls.

And from there she started collaborating with Protestante Digital, where with meticulous faithfulness, every week I receive an email from Rosa where she greets me, asks me how I am and sends me the latest article translated into Spanish.

"One day, Pedro told me that Protestante Digital had asked him for help in translating some articles from English into Spanish. That's how I started to collaborate with the translations. Then more people joined in to help, and I was left with the articles by the Italian theologian Leonardo De Chirico, although you have recently sent me articles on other subjects", she says.

Her translation work over the years is also a witness to technological developments that many of us have not experienced. "In the beginning I had to save the document on a floppy disk and give it to Pedro. And I don't remember at what point I stopped using paper dictionaries and switched to digital ones".

As we talk, she shows me copies of the magazine Women Alive, published by the British Christian media group Premier.

I understand the thoroughness of her translations because of her sincere passion for English. Thoroughness to the point of telling me that "he who makes the translation, also makes the book".

Or the article, in her case. "I copy the article you send me into a word document and print it out so that I can work on the translation by hand. I use an online translator to help me with the more difficult concepts. I go over the text several times, because you can't trust it. I have seen some serious errors even in campaigns by institutions, such as some of the Catalan government. I'm a perfectionist myself", she says. I tell her that the Catalan government should hire her and she laughs. 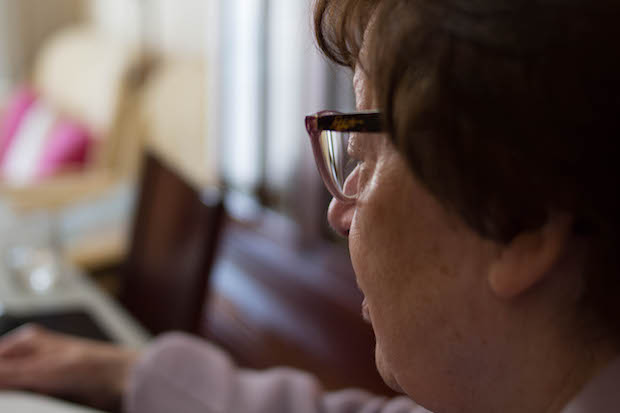 It is important to know who is behind the things you do, says Rosa / J. Soriano

What about the church?

With a sensitive, even humorous realism, but one that also stirs the conscience, Rosa talks about the unpromising outlook for the elderly, especially when it comes to relationships. "As the world stands, we'll all end up living alone", stresses Gubianas.

"Young people should not think that the elderly are no longer useful. This is what you perceive sometimes, the way people treat you. They put you aside because they think that because you are older, you don't know better".

Her perception of the situation in society is more pessimistic than that of the church. She believes that "the elderly are a little despised, not only in the church, but in society in general".

"In the church we are perhaps less despised. Sometimes there are speakers or counsellors who say that there is a bad relationship with older people, and I always think they are right. They say that, but then they don't do anything to fix it", she says and starts to laugh. I can't help laughing too.

Rosa believes that, in general, churches try hard to involve their elderly people. This is important for someone like her, who has reduced mobility and has been an active part of of her local church, the Evangelical Church of Torrassa in the Catalan city of L'Hospitalet de Llobregat, since her conversion. 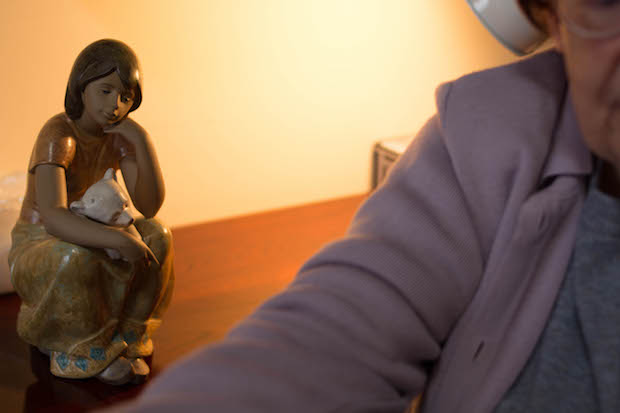 Although, in general, she considers that the churches are careful to involve their elderly, Rosa also perceives some displacement. / J. Soriano

"My husband and I always went to the worship service. We also started going to a CEEB course as listeners. In fact, when he passed away we donated 18 boxes of books for the CEEB library. I am very happy with the church life I have had", explains Gubianas.

"I understand that youth ministry is the most important, but we older people also do a lot of witnessing. It's true that what young people do, we older people may not be able to do. But on many occasions, they could listen to them and explain things they don't know", she adds.

The bookshelves in her dining room, with books and photographs, are a reflection of the advice she humbly offers. "Young people should read books and articles, because you learn from each of them”.

“Sometimes I have noticed that among young people it seems that the world begins the day they were born. And it doesn't", she laughs. "This is something that has happened to every generation, although we used to at least listen".

As I go down the lift of the building, I can't stop thinking about floppy disks and I imagine Rosa's translations as a whole mechanical process, like a long production line with different gears that she activates with the mastery of a craftsman.

But in reality, there are not enough words to describe God's work through time in a person's life. Perhaps "thank you" is the most appropriate.

Published in: Evangelical Focus - life & tech - “Young people should not think that the elderly are no longer useful”