A report shows that forced labour and forced marriage have risen significantly in the last five years, specially among women and children. 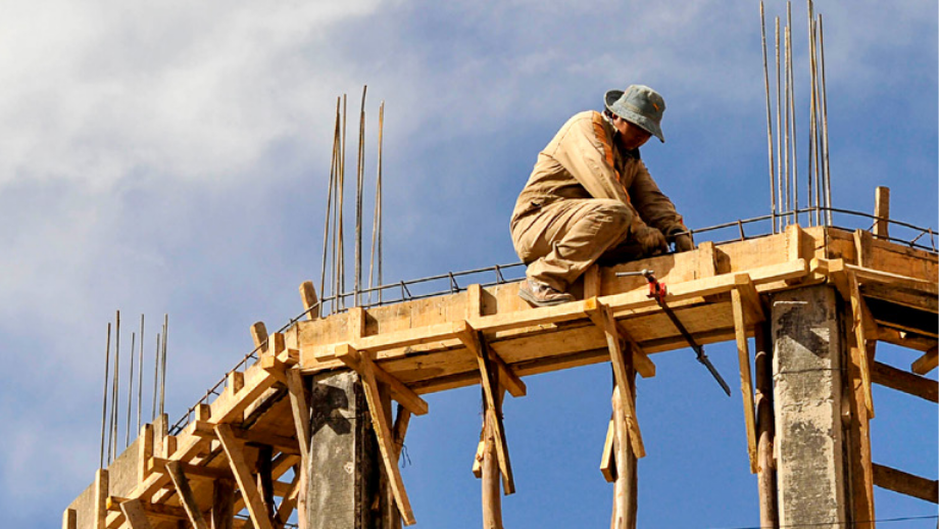 Researchers collected data between 2017 and 2021 from thousands of questionnaires, including face to face interviews from 68 nationally representative forced labour surveys and 75 forced marriage surveys.

The report states that “modern slavery is comprised of two principal components: forced labour and forced marriage. Both refer to situations of exploitation that a person cannot refuse or leave because of threats, violence, deception, abuse of power or other forms of coercion”.

According to its data, 49.6 million people were victims of modern slavery in 2021, 10 million more than in 2016 when the previous report came out. Women and children remain the most vulnerable. 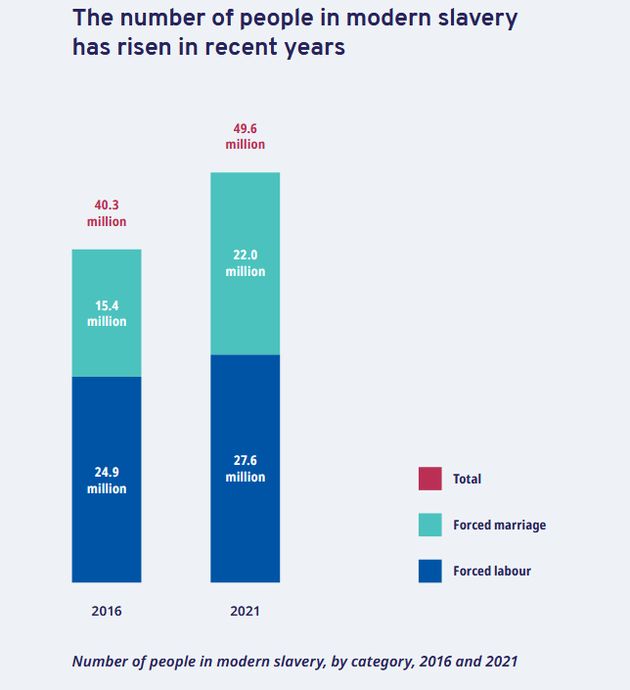 The report shows that forced labour has grown in recent years, with 27.6 million people in those kind of situations. Among them, 11.8 million are women and girls and 3.3 million children.

Regarding the regions, Asia and the Pacific is the first with half of the global total (15.1 million), followed by Europe and Central Asia (4.1 million), Africa (3.8 million), the Americas (3.6 million), and the Arab States (0.9 million).

However, when forced labour is expressed as a proportion of the population, the first position is Arab States (5.3 per thousand people), then Europe and Central Asia (4.4 per thousand), the Americas and Asia and the Pacific (both at 3.5 per thousand), and Africa (2.9 per thousand). 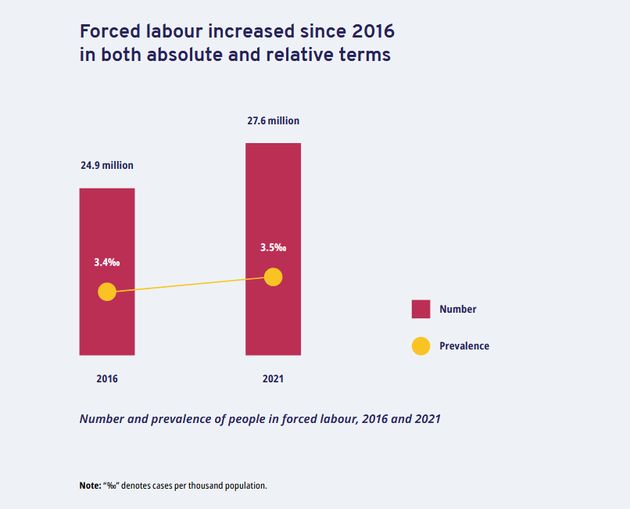 The report points out that “the five sectors accounting for the majority of total adult forced labour (87%) are services, manufacturing, construction, agriculture, and domestic work”.

“Other sectors form smaller shares but nonetheless still account for hundreds of thousands of people are. mining and quarrying work, fishers who are trapped in forced labour aboard fishing vessels, people forced to beg on the street, and people forced into illicit activities”.

Abusive employers use multiple forms of coercion. The most common is a systematic and deliberate withholding of wages (36%), followed by abuse of vulnerability through threat of dismissal, which affects about one in five adults in forced labour.

“More severe forms of coercion, including forced confinement, physical and sexual violence, and the deprivation of basic needs, are less common but by no means negligible”, says the report.

It also explains that more than half of all forced labour occurs in either upper-middle income or high-income countries.

Furthermore, an estimated 3.9 million people were in state-imposed forced labour “at any point in time in 2021”. Around 78% of those coerced by state authorities are male, while 8%. are children.

The 2021 Global Estimates indicate “a total of 6.3 million people are in situations of forced commercial sexual exploitation on any given day”.

Those figures include 1.7 million children, about a quarter of the total. Moreover, nearly four out of every five of those trapped in forced commercial sexual exploitation are girls or women.

According to the report, the number of forced marriages has also risen globally, reaching around 22 million people living in that situation in 2021, 6.6 million more than between 2016 and 2021, “which translates to a rise in prevalence from 2.1 to 2.8 per thousand people”.

Geographically, the region with the highest number of forced marriages is Asia and the Pacific , with nearly two-thirds of all (14.2 million people), followed by 14.5%in Africa (3.2 million) and 10.4% in Europe and Central Asia (2.3 million).

The vast majority of those forced to marry are female, 14.9 million women and girls, but the report underlines that “men and boys are also subjected to forced marriage”. 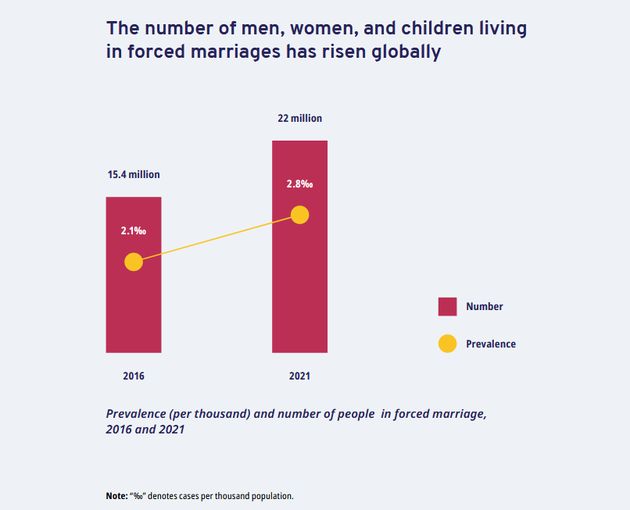 Within the family and minors

The report warns that the family members were responsible for most of forced marriages, specially the parents (73%) and or other relatives (16%).

“Although marriages under the age of 10 do occur, they are very rare. The lowest age at marriage reported in the sample was 9 years”, says the study.

Researchers denounce that “half of those living in forced marriages were coerced using emotional threats or verbal abuse”.

That was the most common form of coercion used to force both males (75%) and females (46%) to marry, which includes the use of emotional blackmail, such as self-harm, asserting that the family’s reputation will be ruined, or / and threats of estrangement from family members, among other things.

“Physical or sexual violence and threats of violence were the next most used form of coercion to force a marriage (20%). Among females, a further 11% reported being kidnapped or forced to travel abroad for the purpose of marriage”, adds the report.

A consequence of forced marriage for women is that many (32%) are obliged to work for their spouse or the spouse’s family.

Looking to the future

In addition to present how is forced labour and forced marriage worldwide, the authors of the report “proposes a number of recommended actions which, taken together and swiftly, would mark significant progress towards ending modern slavery”.

“Nothing can justify the persistence of modern slavery in today’s world. We can and must do better”, they say.

“While the principal responsibility for change lies with national governments, a whole of society approach is needed: the social partners, participants in the social and solidarity economy, civil society, survivor organisations, the business community, investors, and an array of other groups have critical roles to play”, concludes the report .