Young Spaniards propel campaign to “break up with corruption”

Students spread #CortoConElla (#BreakUpWithIt) decalogue on social networks and encourage honest decisions like “paying for copyrighted content” and “having a CV which clearly reflects my career and training.”

For many years now, Spaniards have been witnessing new corruption cases emerging from the main political parties, banks, and regional administrations around the country. These scandals, combined with a very deep financial crisis (one in four are unemployed), have brought many to protest in what has been known as the “indignados” movements.

Thousands have participated in social assemblies to promote “real democracy.” The fresh interest in politics has led to demonstrations in front of local bank branches and to initiatives to stop evictions.

In this context, young Christians in Spain -most of them students and young graduates professing the evangelical Christian faith- have propelled an initiative through which they publicily commit to “break up” with any form of corruption.

They say they believe a Christian should not only denounce political and financial corruption “out there” but also be a model of how corruption is first avoided in one’s personal life: “The fight against corruption starts in my own life.”

The project is called #CortaConElla, literally #BreakUpWithIt, a play on words which is usually used when someone ends a romantic relationship.

On the website, people are challenged to make the right decisions in day-to-day life situations: Am I paying all my taxes? Is the software I download on my computer legal? Am I cheating to get better university marks? Am I asking for public subsidies I don’t actually need?

The campaign has been launched via social networks (Twitter, Facebook, Youtube). Everyone is invited to join and commit publicly to do very specific actions in their everyday life.

The #CortoConElla decalogue encourages people to commit themselves to:

1. Always asking for invoices when buying products and services.

2. Not travelling on public transport without paying.

3. Being honest whenever I apply for public subsidies.

4. Buying in a responsible way. Not returning items without justification.

5. Paying for copyrighted content downloaded from the Internet or using free software. Not pirating WIFI networks.

6. Not plagiarizing intellectual content (but quoting the author where possible), nor copying in exams.

7. Showing integrity when requesting sick leave or absence from work, striving to do my job with excellence.

8. Not stealing office material or anything else from my workplace.

9. Having a CV which clearly reflects my career and training, without inventing or exaggerating it to get a job.

10. Fighting against corruption and breaking up with it.

“A NEW GENERATION COULD CHANGE THE SYSTEM”

Alba Ledesma, apolitics student in Madrid, is one of the promoters. “I think this is a very necessary initiative”, she says. “Today in Spain we hear about corruption scandals on a daily basis. We react with shame and disgust. But we should not stop there.”

“#CortoConElla invites us to leave our comfort zone and question ourselves about actions like using the metro trains without paying for them for instance. We need to think about corruption both individually and as communities. If a multitude breaks up with corruption, these individual changes can achieve a big change throughout the entire society.” 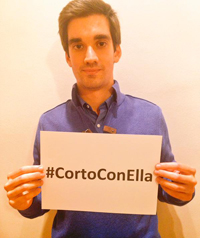 Jordi Llenas, who is studying finance in Barcelona, adds: “This project is exciting because it is the first time that we change our focus from criticising others' corruption towards focusing on the change we want to see, ‘breaking up’ with corruption. A new generation that will take leadership in Spain could change the system from its very foundations. We are ready to include whoever wants to join us, and we will start by ending corruption in our own lives, to begin with.”

The initiative has been launched two months before the Spanish national election, expected in December 2015.