Archbishop Welby, on Facebook: “Even if everything else fails, God doesn’t”

“People often ask me why I’m a Christian”, The Archbishop of Canterbury writes on his official page. “When I’ve failed he’s picked me up and healed and strengthened me.” 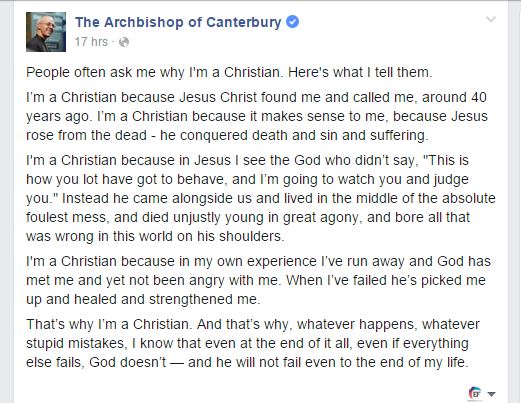 Justin Welby, the Archbishop of the Church of England (Anglican Communion) wrote a very clear statement of faith on his Facebok profile. Welby clearly explained the personal and biblical reasons for his own belief.

“People often ask me why I'm a Christian. Here's what I tell them”, the Anglican archbishop atarts.

In this short message before Christmas, Welby commits to an evangelical biblical doctrine which contrasts with the liberal approach of many other leaders in the Church of England.

“I'm a Christian because in Jesus I see the God who didn’t say, ‘This is how you lot have got to behave, and I’m going to watch you and judge you.’ Instead he came alongside us and lived in the middle of the absolute foulest mess, and died unjustly young in great agony, and bore all that was wrong in this world on his shoulders”, he explains.

“I’VE RUN AWAY AND GOD HAS MET ME”

“I'm a Christian because in my own experience I’ve run away and God has met me and yet not been angry with me. When I’ve failed he’s picked me up and healed and strengthened me.”

Welby concludes saying: “That’s why I’m a Christian. And that’s why, whatever happens, whatever stupid mistakes, I know that even at the end of it all, even if everything else fails, God doesn’t — and he will not fail even to the end of my life.”

Before 24 hours, more than 8,000 people had reacted to the message, and the status update was shared by 2,800 social media users.

Published in: Evangelical Focus - life & tech - Archbishop Welby, on Facebook: “Even if everything else fails, God doesn’t”