“Highly religious” USA citizens are happier and more involved with family and in their communities, a Pew Research survey says. When weighing major life decisions, 7 out of 10 evangelicals said they prayed.

Pew Research Center has released a follow-up survey on religion in everyday life. The study has taken seven years, and it aimed to “fill the gap” left by the US census and the self-reporting of denominations, studied the change of religion in America from 2007 to 2014.

It is a supplemental look at everyday religion in the United States, meant to examine how religious beliefs and practices go beyond prayer and church attendance to influence the day-to-day lives of Americans.

According to the research, “highly religious Americans” are those who say they pray every day and attend religious services each week.

Catholics are the next largest group of highly religious people (17%), followed by mainline Protestants (14%).

HAPPIER AND MORE ENGAGED WITH FAMILY

Pew has found that highly religious people are more engaged with their extended families, more likely to volunteer, more involved in their communities and generally happier with the way things are going in their lives.

For example, nearly half of highly religious Americans gather with extended family at least once or twice a month. By comparison, just three-in-ten Americans who are less religious gather as frequently with their extended families.

Two-thirds of highly religious adults (65%) have donated money, time or goods to help the poor in the past week, compared with 41% who are less religious.

Additionally, 40% of highly religious U.S. adults describe themselves as “very happy,” compared with 29% of those who are less religious.

Regarding other areas of day-to-day life – including interpersonal interactions, attention to health and fitness, and social and environmental consciousness – Pew Research Center surveys found that people who pray every day and regularly attend religious services, appear to be very similar to those who are not as religious.

Highly religious people are about as likely as other Americans to say they lost their temper recently, and they are only marginally less likely to say they told a white lie in the past week. 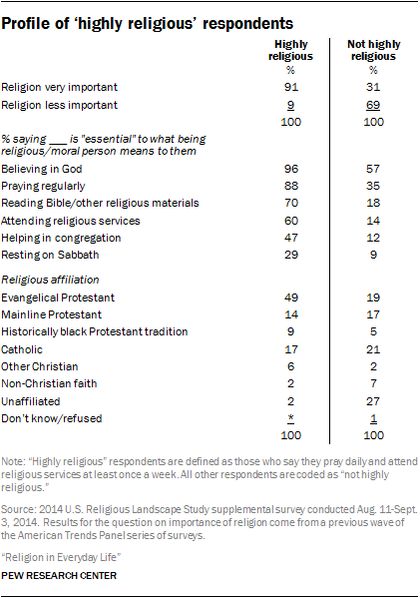 And when making decisions about what goods and services to buy, they are no more inclined to consider the manufacturers’ environmental records or whether companies pay employees a fair wage.

The survey´s aim was to go beyond traditional measures of religious behaviour (such as worship service attendance, prayer and belief in God ), in order to examine the ways people exhibit (or do not exhibit) their religious beliefs, values and connections in their day-to-day lives.

To solve this question, Pew asked U.S. adults whether each of a series of beliefs and behaviours is “essential,” “important but not essential,” or “not important” to what their religion means to them, personally. 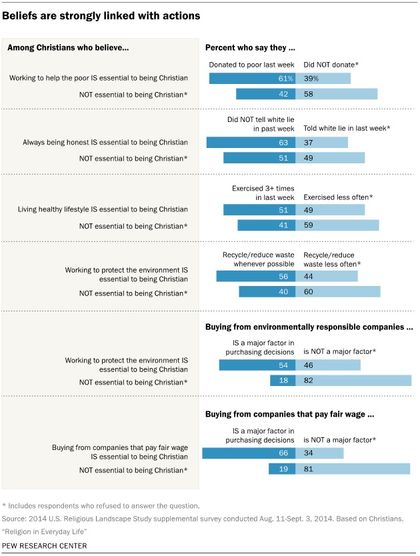 Rather than consult a pastor or priest, 82% of the highly religious and less religious rely on their own research when making important decisions; 45% turn to prayer and personal reflection; 43% to family; 25% to professional experts; but only 15% to religious leaders.

Having regular conversations about religion is most common among evangelicals, and people who belong to churches in the historically black Protestant tradition. By contrast, relatively few unbelievers said they discuss religion with any regularity.

When someone disagrees with them about religion, most Americans believed the best thing to do is to try to understand the other person’s point of view and agree to disagree.

But about one-in-four (27%) the best thing to do is avoid discussing religion with those who disagree with them. A scant 5% say the best course is to try to persuade the other person to change his or her mind.