A guide to World Refugee Sunday

On June 19 and 26, many churches will spend a day to pray “for the welfare and protection of the world’s forcibly displaced peoples”. Ideas and resources are offered. 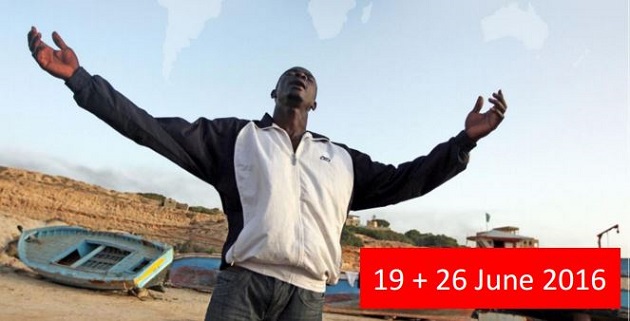 Churches across the world are called to celebrate a special worship service to think biblically about the effects the refugee crisis has on millions of people. Sundays 19 and 26 June are suggested.

“We call upon Christians across the continent to pray for all who seek refuge in Europe. We are witnessing a season of great turmoil and desperation. But we also see the Lord at work as the Church reaches out to care”, the European Evangelical Alliance (EEA) said.

The World Refugee Sunday initiative was first launched in 2006. “It is designated as an opportunity for local churches, small groups and others to demonstrate their common concern for the welfare and protection of the world’s forcibly displaced peoples”, the Refugee Highway Partnership explains.

“It is observed on the Sunday falling upon either side of the United Nations’ designated World Refugee Day (June 20).”

National Evangelical alliances like the French CNEF and the Swiss SEA have also produced special contents for the World Refugee Sunday.

Suggested resources to be used in a special church meeting:

- Download the poster to announce the event in your church. In English and other 17 languages.

- Preach on a text from the Bible which relate to the refugee crisis. Some are:

Ruth 1:16-22 Ruth and Naomi leave Moab and travel to Bethlehem

Psalm 137 Lament of the exiles who were taken to Babylon

- Use the RHP resource “Refugees in the Bible”. It aims to “explore the causes of forcible displacement in the Bible. Open up the texts and explore their context. Pay attention to the emotions and trauma experienced by those displaced. Note how God is actively engaged in the stories.” 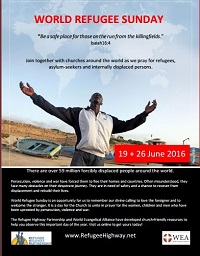 - Pray for the refugee crisis following the suggestions of the EEA:

For protection from the perils of the journey. Pray for compassionate care of immediate needs and fair processing according to international standards. For family reunification where refugees have lost one another on the journey. Especially pray for lost children. For rebuilding of lives. Pray for a sense of normality to return, for healing of traumatised minds, for the opportunity to build friendships and to integrate well. For the ones who are refused the right to stay in Europe. That they will find hope and a home. For religious freedom for all refugees. Pray that all would find the space to express and explore faith appropriately. Pray that those who would seek to recruit refugees for violent purposes would be thwarted.

For truth to be understood and fear and prejudice to be contained. Pray for responsible media reporting that neither exaggerates nor hides the difficulties. Our politicians, social services and security services to be wise, fair and compassionate as they balance the many challenges involved. For better international cooperation to assist refugees and to prevent the desperate situations which cause people to need to move.

For refreshment for all the churches, ministries and individuals who have been working so hard to assist refugees. For many more local churches to set an example of welcome. For a spirit of generosity in local churches and that, in the midst of all these challenges, God’s abounding generosity will once more surprise and bless many. For all the Christian refugees and the many new converts to find the fellowship and support they need to flourish.

Evangelical Focus has partnered with the EEA and the RHP to produce a series of short videos with experts to help local churches to engage with refugees in their own context.

Any of these 5-8 minute videos are a good option to use in a Refugee Sunday event:

- The crisis in Calais. Paul Sydnor

More than 10 other written articles/interviews can be found in the “Refugees in Europe” series.

Testimonies of conversions to Jesus Christ: “God brought all the way from Iran to Belgium so I could know Him” and “Show your love for refugees, but respect their privacy”.

Learn more about World Refugee Sunday visiting the websites of the EEA and the RHP and The Refugee Campaign.