According to the OECD, only 66% of women are employed worldwide, compared to 80% of men. The report also analysed the educational attainment and its impact on the labour market. 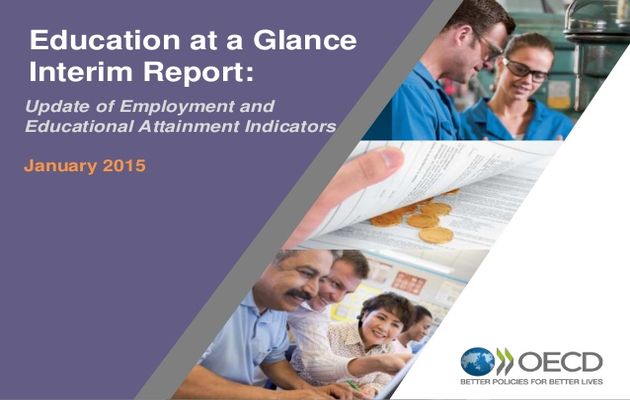 ”Education at a Glance Interim Report

The annual interim report of the Organization for Economic Cooperation and Development (OECD) “Education at a Glance Interim Report: Update of Employment and Educational Attainment Indicators”, includes 2013 data and analysis on educational attainment, employment, and the transition from school to work.

According to the OECD, only 66% of women are employed worldwide, compared to the 80% of men.Despite the fact that in nearly all countries, there are more women with high education, those women are usually unemployed, and for men, even though they are less qualified, it is easier and faster to find a job.

The report has collected data from the 34 countries that belong to the OECDE, and from other countries that were very interesting for the study, like Brazil, Russia, Argentina, China, Colombia, India, Indonesia, Latvia, Saudi Arabia and South Africa. The latest data collected are from the first four moths of 2014.

Only in Holland there are more 25-34 years-old qualified women working than men. At the other side, only in Mexico and Turkey, the percentage of men with higher education is bigger than the percentage of women.

The OECD explained that gender differences in employment “might be a result of more women being outside of the labour force, probably due to traditional roles,in regards to family units (for instance, mothers staying at home, specially in countries with larger gender gap in relation to wages, and with limited offers of childcare facilities)”.

The report underlines the continuing need for improving education. According to the study, almost one in six 25-34 year-old across OECD countries does not have the skills considered essential to function in today’s society, and the situation has changed little since 2003.

There are 13 OECD countries with 15% or more unqualified youth, including countries like France, the Netherlands, Norway, Denmark, New Zealand or Italy.

“Having one out of every six young adults entering the world of adult life without a qualification is a major risk for labour markets and societies, said Andreas Schleicher, OECD Director for Education and Skills. “Progress has to be achieved across the educational ladder, with priority given to diminishing the share of the least educated among the young. One in six younger adults have not reached upper secondary education”.

Greece, Spain, and and Slovak Republic have the highest unemployment rates among adults with basic education (above 25%). At the same time, for adults with tertiary qualification, the highest unemployment rates are also found in Greece and Spain (15% or more).These findings indicate that people with low educational attainment are at high risk of hampering their labour market prospects and self-sufficiency

The OECD has also published the Education Policy Outlook: Making Reforms Happen, which analyses and compares policy trends and reforms across OECD countries since 2008. Issues analyzed include equity and quality in education, preparing students for the future, school improvement, evaluation and assessment, as well as governance and funding.

“Too many education reforms are failing to measure success or failure in the classroom,” said Andreas Schleicher, at the launch of the report at the Education World Forum in London. “While it is encouraging to see a greater focus on outcomes, rather than simply increasing spending, it’s crucial that reforms are given the time to work and their impact is analyzed.”

You can read the full OEDC report here.