“I am selling this thing I truly believe is fiction,” says developer. McKendrick was raised as a Mormon, but left the faith. 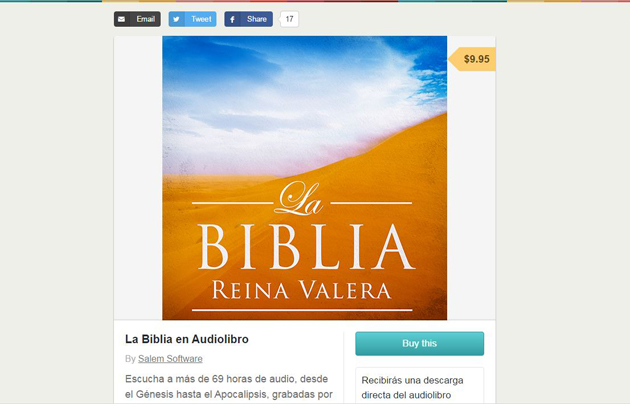 An American app developer who declares himself to be an atheist found a gap in the market targeting Christians looking for Spanish a translation of the Bible.

In his personal blog, McKendrick gives more details on how he came to the idea: “My hypothesis was three fold: (1) Whoever was making Spanish Bibles right now was making decent money, (2) I could make a better Spanish Bible app relatively cheaply, and (3) the competition wasn’t too heavy so I’d still be able to be found.”

“I AM SELLING SOMETHING I TRULY BELIEVE IS FICTION”

Acording to a Christian Today article, McKendrick was raised as a Mormon, and even got married in a temple, but left the faith after realising he had doubts. Now, he says he feels guilty about profiting from a book he doesn't believe in.

“What if you sold ‘Harry Potter’ books or ‘Lord of the Rings’ books, but you told people it was real? And you told people if they would just learn how to write spells themselves, they could heal their children? And if you sold that as a real thing? I would feel terrible about that.”

“But that's really the situation I am in selling the Bible. I am selling this thing I truly believe is fiction, but other people are trying to use [it] and mold their lives to fix large and small problems.”

However, the money is too much of a pull for McKendrick to consider putting a stop to his app. He is using it to fund other parts of his business.

“THEY THINK I AM A PREACHER”

McKendrick said that users sometimes email him with prayer requests. “They think I'm a preacher,” he explained. “If you're emailing the maker of an app to get help for your son, you're probably not a in a great spot. Trading that for profit weighs on me a little bit.”

Nevertheless, McKendrick thinks on how to expand his product: “I am flying to Spanish Christian publishing conference in Miami called ExpoLit. I’m hoping to make friends with people who own copyrights to additional content our customers have asked for. Not only would the in-app purchase revenue be nice, but our customers would love us.”

We spent four months to create the audiobook of the Reina Valera Bible [most read Bible version in Spanish] with the best and most inspiring sound that exists. We have worked with the best worldwide professional artists to record this wonderful work of God. This app is perfect for when you're driving around town, cooking, working in the garden... but you still yearn to hear the wonderful Word of God. This is the text in Spanish which is closest to what God's people wrote over 2000 years ago, in the times of Jesus Christ.