The Nashville Statement says the approval of homosexual practice and transgenderism is “an essential departure from Christian faithfulness and witness”. 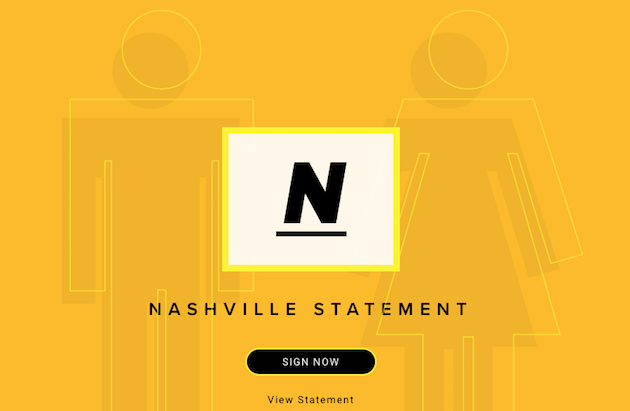 The Nashville Statement has been signed by 150 evangelical representatives.

Evangelical leaders of the Unites States have issued a manifesto on sexuality, identity and marriage, defending the historic biblical approach.

The Nashville Manifesto is a list of 14 core beliefs based on a historic evangelical doctrinal view of sexuality.

“As Western culture has become increasingly post-Christian, it has embarked upon a massive revision of what it means to be a human being. By and large the spirit of our age no longer discerns or delights in the beauty of God’s design for human life”, the preamble of the manifesto says.

“Many deny that God created human beings for his glory, and that his good purposes for us include our personal and physical design as male and female”.

God’s good design, the authors say, is being “replaced by the path of short-sighted alternatives that, sooner or later, ruin human life and dishonour God”.

The statement includes a call to Christians. “This secular spirit of our age presents a great challenge to the Christian church. Will the church of the Lord Jesus Christ lose her biblical conviction, clarity, and courage, and blend into the spirit of the age? Or will she hold fast to the word of life, draw courage from Jesus, and unashamedly proclaim his way as the way of life?”

The Nashville Statement can be downloaded from its official website.

Article 2. WE AFFIRM that God’s revealed will for all people is chastity outside of marriage and fidelity within marriage. WE DENY that any affections, desires, or commitments ever justify sexual intercourse before or outside marriage; nor do they justify any form of sexual immorality.

Article 3. WE AFFIRM that God created Adam and Eve, the first human beings, in his own image, equal before God as persons, and distinct as male and female. WE DENY that the divinely ordained differences between male and female render them unequal in dignity or worth.

Article 4. WE AFFIRM that divinely ordained differences between male and female reflect God’s original creation design and are meant for human good and human flourishing. WE DENY that such differences are a result of the Fall or are a tragedy to be overcome.

Article 6. WE AFFIRM that those born with a physical disorder of sex development are created in the image of God and have dignity and worth equal to all other image-bearers. They are acknowledged by our Lord Jesus in his words about “eunuchs who were born that way from their mother's womb.” With all others they are welcome as faithful followers of Jesus Christ and should embrace their biological sex insofar as it may be known. WE DENY that ambiguities related to a person’s biological sex render one incapable of living a fruitful life in joyful obedience to Christ.

Article 8. WE AFFIRM that people who experience sexual attraction for the same sex may live a rich and fruitful life pleasing to God through faith in Jesus Christ, as they, like all Christians, walk in purity of life. WE DENY that sexual attraction for the same sex is part of the natural goodness of God’s original creation, or that it puts a person outside the hope of the gospel.

Article 9. WE AFFIRM that sin distorts sexual desires by directing them away from the marriage covenant and toward sexual immorality— a distortion that includes both heterosexual and homosexual immorality. WE DENY that an enduring pattern of desire for sexual immorality justifies sexually immoral behavior.

Article 10. WE AFFIRM that it is sinful to approve of homosexual immorality or transgenderism and that such approval constitutes an essential departure from Christian faithfulness and witness. WE DENY that the approval of homosexual immorality or transgenderism is a matter of moral indifference about which otherwise faithful Christians should agree to disagree.

Article 11. WE AFFIRM our duty to speak the truth in love at all times, including when we speak to or about one another as male or female. WE DENY any obligation to speak in such ways that dishonor God’s design of his imagebearers as male and female.

Article 12. WE AFFIRM that the grace of God in Christ gives both merciful pardon and transforming power, and that this pardon and power enable a follower of Jesus to put to death sinful desires and to walk in a manner worthy of the Lord. WE DENY that the grace of God in Christ is insufficient to forgive all sexual sins and to give power for holiness to every believer who feels drawn into sexual sin.

Article 14. WE AFFIRM that Christ Jesus has come into the world to save sinners and that through Christ’s death and resurrection forgiveness of sins and eternal life are available to every person who repents of sin and trusts in Christ alone as Savior, Lord, and supreme treasure. WE DENY that the Lord’s arm is too short to save or that any sinner is beyond his reach.

Many Twitter users have reacted to the manifesto using the hashtag #NashvilleStatement.