Romelu Lukaku of Belgium and Fidel Escobar of Panama knelt on the field to pray at the end of the game. Social media users described it as “the image of the day”. 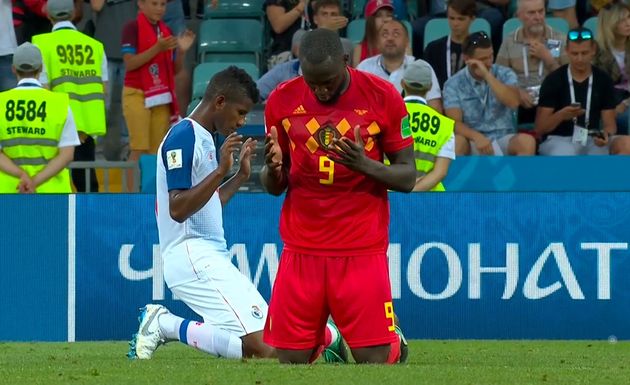 Lukaku and Escobar pray together after the game. / You tube

Rivals but not enemies, even united through their belief in God.

Millions of fans who follow the 2018 World Cup in Russia, witnessed a scene that went around the world thanks to social media.

The football players Romelu Lukaku of Belgium and Fidel Escobar of Panama knelt in the field to pray at the end of the match between their national teams.

Both teams played on June 18, and Belgium beat Panama 3-0.  Lukaku, who is also the Manchester United star of the English Premier League, scored two of the goals.

Several media and many on Facebook and Twitter described that scene as “the image of the day”.

READING THE BIBLE EVERY DAY

The Director of Communications of the WYD Panama 2019, Eduardo Soto, told Catholic news agency ACI Prensa that Fidel Escobar is an evangelical Christian, while Romelu Lukaku is a Roman Catholic.

This is not the first time that Lukaku kneels to thank God after a game. In his Instagram account he has published several images where he is seen making the same gesture.

He once told the media he reads the Bible every day. He told UK newspaper The Telegraph that “family is more important than football”.

Published in: Evangelical Focus - life & tech - Christian players of Belgium and Panama pray on the pitch after World Cup match