WWL 19: One Christian out of nine suffers persecution worldwide

According to World Watch List, released today by Open Doors International, 4,305 people died in 2018 because of their Christian faith. Christian persecution has drastically increased.

The 2019 World Watch List (WWL), prepared annually by the non-profit organization Open Doors, confirms one more year that the persecution of Christians has grown worldwide.

In 2018, 4,305 people lost their lives because of their Christian faith, a considerable increase compared to the previous year, when 3,066 murdered Christians were counted.

One Christian out of nine in the world suffers persecution at a high, very high or extreme level.

“We have statistical evidence to support our experience that persecution is growing both in intensity and in the number of countries and Christians affected”, said Wybo Nicolai, founder of the WWL 26 years ago, now director of external operations of Open Doors International.

According to the director, “the list does not break the trend of previous years, but it is even worse than last year”.

There has also been an alarming increase in the number of churches attacked, from 783 in 2017 to 1,847 in 2018, and in the number of Christians arrested, prosecuted and imprisoned for reasons directly related to their faith: 3,150 for the 1,905 cases registered in the 2018 WWL.

“There are some countries that have a very specific vision of how things should be, so that they do not accept that there is anyone who acts differently. that is what we are seeing in the Islamic and communist countries”, the director of Open Doors Spain, Ted Blake, told Spanish news website Protestante Digital.

“If last year we were talking about 60 countries with a high level of persecution, this year we are talking about 73. It is a clear indicator that the trend is toward greater intolerance with Christianity”, he added.

SOUTHEAST ASIA, THE MOST DANGEROUS REGION

For the 18th year in a row, North Korea holds the top spot on the World Watch List, followed by Afghanistan and Somalia. The first two countries have the same score (94 over 100) and differ by a few tenths, while that Somalia continues with 91 points out of a maximum of 100.

“Possibly there is beginning to be some relaxation in the tension that exists in North Korea towards Christians", Blake pointed out, referring to the agreement between the Asian country and the United States and the recovery of relations with South Korea.

In China, the situation of religious freedom is the worst of the last decade and begins to remember the time of the Cultural Revolution.

On the 2019 WWL, China rose from rank 43 to 27. More than 170 churches have been attacked or forced to close down, crosses have been removed from a number of buildings, and believers have been arrested (1,131).

Due to laws which are designed to enshrine a growing ultra-nationalistic agenda, India has risen one more position and is already ranked 10th, with 83 points, 28 points more than in 2014.

“Year after year, the number of cases of violence against Christians has practically doubled in India. It is revolving around a religious nationalist vision", Blake explained.

In Southeast Asia, the triple bombing of churches in the city of Surabaya in Indonesia has been one of the most prominent terrorist acts against Christians in 2018.

Persecution has also grown in Africa,mainly because of the terrorism of different terrorist groups such as Seleka in the Central African Republic, Boko Haram in Nigeria or Al-Shabbaab in Somalia.

Regarding the number of Christians killed, Nigeria is once again the country with more deadly crimes: at least 3,731 people (87% of the total deaths) have been murdered because of their faith, almost twice the number of 2,000 registered last year. 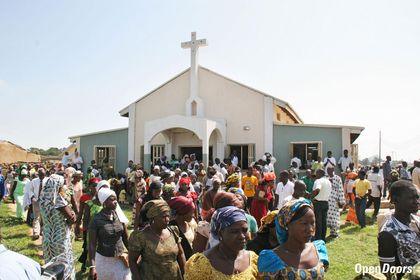 The violence in Nigeria has also left Christian villages totally depopulated where the believers have had to flee because of the arrival of their attackers, who move through the region with total impunity.

Meanwhile, Algeria has climbed up to 22 places in the WWL ranking, reaching a score of 70 points. “Now we are seeing that there are more conversions of Arab Muslims in Algeria, and the Islamic population is reacting negatively against those facts”, the director of Open Doors Spain said.

Another country of the continent where persecution has increased most is the Central African Republic, which has gone from position 35 to 21. On the contrary, Iraq fell to rank 13 on the 2019 World Watch List.

With the territorial defeat of Islamic State, thousands of Christians returned to rebuild and resettle, especially in the Nineveh region, although they continue to face harassment, discrimination, and often physical and emotional abuse.

Somalia, Libya, Sudan and Eritrea continue to be among the ten countries in the world where Christianity is most persecuted, with 86 points or more.

Christians are also persecuted in Europe, where the number of Christians murdered has tripled in the last year, going from two to six.

In addition, “there is a radicalization in the continent, with extremism and populism, each one being intolerant in their own way".

Russia has broken into 41st place in the ranking, but Greece is the European country in which more Christians have died, four, followed by France and Germany.

The number of attacks on churches and temples has also increased, from a hundred registered in the previous list to 194 in 2018. 54 of these cases have occurred in France, followed by Germany (44) and Spain (28).

SOUTH AND CENTRAL AMERICA: MEXICO AND COLOMBIA RANK 39 AND 47

Mexico (39) and Colombia (47) are the Latin American countries the 50 first countries of the WWL.

“There are high levels of organised crime and corruption in Mexico and Colombia. Christians who stand against this, try to prevent young people from joining their ranks, or refuse to engage in illegal activities, are seen as a threat by criminal gangs”, Open Doors international points out. 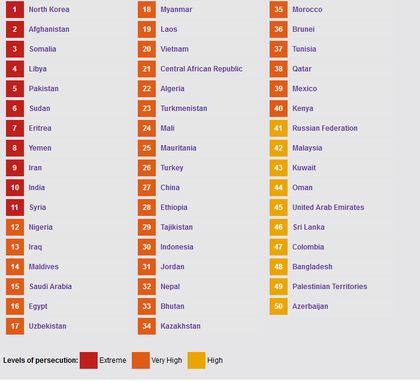 According to the report, “from a global perspective, persecution comes from different avenues: from a believer’s family, friends, fellow-villagers and work colleagues, community councils, local government officials and from police and legal systems”.

“In the top five most dangerous countries to live as a Christian, the female experience of persecution is characterised by sexual violence and forced marriage whereas Christian men are more likely to be detained without trial or killed by the authorities or extremists”, it added.