The Filipino congressman and eight-division world boxing champion said he wanted to pummel Mayweather in the ring and have a Bible study with him after the fight. 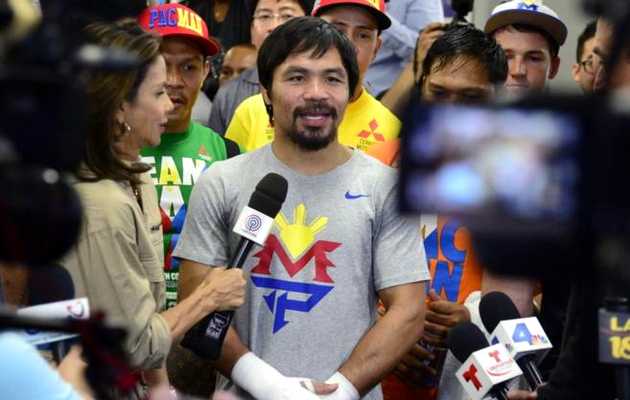 For weeks leading up to the May 2 megafight between Pacquiao and unbeaten Floyd MayweatherJr., Pacquiao's outspoken trainer, Freddie Roach, has been telling a story that his fighter has a deep dislike for Mayweather, stemming from Mayweather's history of domestic violence.

Roach has called the fight "good vs. evil."

But Wednesday, on a day Pacquiao invited the news media for a fresh batch of interviews at his training headquarters at the Wild Card Boxing Club in Hollywood, the Filipino congressman and eight-division world boxing champion said he wanted to pummel Mayweather in the ring and have a Bible study with him after the fight.

"I just want to send this message to him – nothing personal," soft-spoken Pacquiao said. "We're just doing our jobs. And after the fight, if I could talk to him, I want to share the gospel of God. I want to share to him about God, why we need God."

Pacquiao appeared in a serene and satisfied mood, saying his training has gone well, he's confident he will beat Mayweather and that he has no reason to distrust Las Vegas judges if the fight, in Mayweather's hometown, comes down to scorecards.

Promoter Bob Arum says the confidence he sees in Pacquiao is similar to when much-younger Pacquiao was taking on Oscar De La Hoya in 2008.

At that time, Pacquiao had fought only once at over 130 pounds, while De La Hoya was a former welterweight (147-pound limit) champion.

"People thought Manny was going to get killed," Arum said. "I ended up spending the promotion of the fight defending myself. People were saying, 'You money-hungry son of a gun, you're putting him in this fight to get killed.'

"It's impossible to defend yourself. But I knew that Manny felt not only was he competitive with Oscar, but he would beat Oscar. He was telling me all along, 'Bob, don't worry. I'm going to come through for you. You're not going to be embarrassed. I'm going to beat him.' "

"And that's what he's saying now," Arum said. "That's what I'm getting from him now."

Roach is seeing a couple of things he hasn't seen before from Pacquiao.