‘For the Family, away from the imposition of Gender Ideology’ 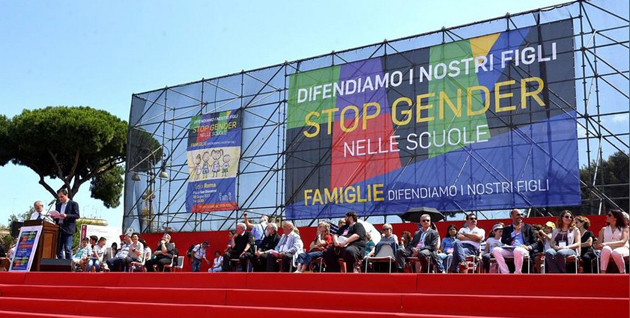 Giacomo Ciccone speaking from the platform at the demonstration in Rome.

One million people rallied in Rome on June 20th under the banner “Let’s defend our children”.

The rally was organized to express concerns over different bills that the Italian Parliament is discussing on civil unions (being disguised marriages) and gender theory being taught in state schools.

There is a growing pressure to introduce legislation that eventually will re-define marriage away from the traditional understanding, open adoptions to individual parents, and impose gender teaching as the only acceptable “single thought”. In the background there is also another bill against homophobia that will potentially threaten freedom of speech.

Evangelicals were at the forefront of the movement that led to the impressive rally. Over the last two years, the Italian Evangelical Alliance has been networking with other pro-family movements, producing materials and organizing events throughout the country. 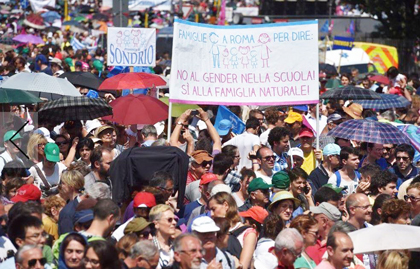 Giacomo Ciccone, chairman of the Italian Evangelical Alliance, was the first leader to speak from the platform. It had never happened that an Italian evangelical would address such a crowd.

Ciccone referred to the biblical view of marriage as being a union between a man and a woman and the primary responsibility of parents to educate children.

Ciccone also highlighted the role of evangelicals as being committed to a plural society. “We are not opposed to the State regulating different relationships” – Ciccone said – “but the state does not have the authority to re-define an institution like marriage that precedes it and should always put the interests of children first. The imposition of gender ideology is a dangerous threat to a plural society”.

Several hundreds of evangelicals were part of the massive crowd that made up a joyful and peaceful rally supporting the family.

"CO-BELLIGERANCE FOR THE WELFARE OF SOCIETY"

The “Let’s defend our children” rally had the support of many Roman Catholic movements, although it did not have the official backing of the Roman Church. Other religious movements were part of it (e.g. different muslim and sikhs associations, Rome’s chief Rabbi) as well as some secular associations of parents. For the Italian Evangelical Alliance it was an act of “co-belligerence” for a good cause for the welfare of society.

Published in: Evangelical Focus - life & tech - ‘For the Family, away from the imposition of Gender Ideology’