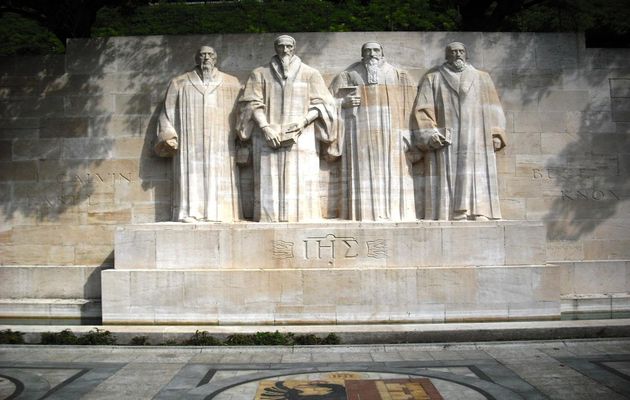 Apart from the towering figures of Martin Luther and John Calvin, the original Protestant Reformers have more or less slipped into the abyss of oblivion. With the possible exception of Ulrich Zwingli, it would be fair to say that most contemporary evangelicals are hard-pressed to name one other leading Protestant from the sixteenth century.

What we are going to do today, then, is to recover ten key names from the past of Protestantism and give a brief explanation as to why each figure was relevant in his own way.

Melanchthon is best-known for being Martin Luther’s young and faithful right-hand man. The two were pretty much a sixteenth-century version of Batman and Robin! The humanist Philip, much more peace-loving and academically-orientated than Luther, defended the chief insights of his senior’s Reformation thought via his numerous books, tracts and confessions.

Fifteen years before Calvin published his initial edition of the ‘Institutes’ over in Basel (1536), Melanchthon had already released the first groundbreaking book upon systematic theology from an Evangelical perspective, namely, ‘Loci Communes’ in Latin or ‘Common Places’ in English. So highly revered was the tome that Luther literally proclaimed: “Next to the Scriptures, there is no better book”.

As well as ‘Common Places’, Melanchthon would go down in Lutheran history for drawing up what was to become perhaps the most significant document of early Protestantism, that is, the ‘Augsburg Confession’, hot-off the press just in time for the well-known Diet of Augsburg (8th April 1530). Diet, it should be pointed out, referring to the general assembly of the former estates of the Holy Roman Empire; not to fruit and veg. To this day, the Augsburg Confession continues to enjoy authoritative status within the walls of Lutheranism.

After Luther’s death on 18th February 1546, the reins of the German Evangelical movement fell into the hands of Philip. Nevertheless, due to his willingness to give in to the State and Roman Catholicism over ‘secondary matters’ (adiaphora), another faction, led by Matthias Flacius, arose within Lutheranism in opposition to Melanchthon’s compromising tendencies.

In the revered name of the late Martin Luther, the strict Gnesio-Lutherans (translated as the ‘genuine’ Lutherans) slammed Melanchthon’s concessions and his alleged more Reformed understanding of the Lord’s Supper as “Crypto-Calvinism”. Not surprisingly whilst on his death-bed one of the reasons why Master Philip looked forward to leaving this life was to be delivered from the “wrath of the theologians”.

Flacius was a much more die-hard Martin Luther fan than Melanchthon ever was. As far as Flacius was concerned, Dr. Martin could do no wrong. Hence his fierce rebuttal of what he saw as Melanchthon’s watering down of the pristine Lutheran message. Fiery, feisty and always up for a fight, the Croatian-born thinker appeared to be Luther reincarnate. Flacius was Luther’s pit-bull.

It seems that everywhere Flacius went, flames sparked. Some called him “the most hated man in Germany”, others an “abominable monster” and as the Jesuit James Brodick wrote, “Seldom was there a man whose life was mastered by such dark and mad conviction”.

In fact, Flacius was so polemical that he was denied a Christian burial when death overtook him at Frankfurt in 1575. Nevertheless, his academic brilliance was also undisputed. Whether he put his hand to linguistics, philosophy, hermeneutics, church history or theology, Flacius excelled as few before him.

Doctrinally speaking, Flacius’ importance can be summed up in three key dogmatic issues. Firstly, Flacius openly decried any sort of cooperation between God and man’s free-will in the act of salvation. As far as Flacius was concerned, salvation was an entirely monergistic affair. In this sense he was resolutely opposed to what he perceived to be Melanchthon’s Semi-Pelagian leanings.

Secondly, he championed the Reformation truth of justification as a divine legal declaration against the errors of his fellow Lutheran Andreas Osiander (1498-1552) who advanced the mystical theory that God justifies a man by indwelling in him. Justification, as Luther and Flacius both pointed out, was a forensic and judicial affair that occurred outside of man. It had to do first and foremost with a sinner’s standing before God; not his inner-nature.

Thirdly –and perhaps most importantly for contemporary theological discussion- Flacius disparaged the idea that the State could ultimately tell the church what to do. The government should have no say in the things of God. Yet again, such thinking was in complete divergence to Melanchthon’s thinking who pretty much believed in blind submission to the State. The scholar Oliver Olson recently remarked that had Lutheranism paid more attention to Flacius, the German Lutheran church could have had a clearer guide in her struggle against twentieth-century National Socialism.

Martin Bucer was unique amongst the Reformers in that he influenced the three main strands of the Magisterial Reformation i.e. Lutheranism, the Reformed Church and Anglicanism. Stationed in the strategic town of Strasbourg throughout most of his ministerial career, Bucer is perhaps best-known for trying to forge links of unity between Martin Luther and Ulrich Zwingli (albeit unsuccessfully).

Not only did he desire to bring the two Protestant giants together, but he also envisioned a united national German church wherein both Protestants and Catholics could fellowship independently of papal Rome.

In this sense, Bucer is sometimes seen as a forerunner of what would become the ecumenical movement. It should come as no surprise, then, to realize that Bucer is perhaps most remembered for his doctrine of the church. He longed to see congregations both reformed and united by the Scriptures.

As well as his friendship with Luther and Zwingli, he also had quite an effect upon the young John Calvin who spent three years in Strasbourg (1538-41) before the Frenchman inaugurated his own work of reformation in the city of Geneva. Moreover, once Bucer was driven out of Strasbourg, he was able to have a say in the emerging Anglican movement thanks to his new teaching position at Cambridge.

He helped pen the 1552 ‘Book of Common Prayer’ and exercised a considerable influence upon key English Reformers such as the Archbishop of Canterbury Matthew Parker (1504-75) and John Bradford (1510-55). After continual battles with sickness, he finally succumbed to death whilst still at Cambridge in 1551.

John Knox was a good old-fashioned fearless Scottish fireman. Not fireman in the modern sense of extinguishing flames but in the biblical John-the-Baptist-sense of igniting them. He was a Reformed version of Matthias Flacius. Despite his small stature, Knox endured unspeakable hardship as an imprisoned rower on the French galleys between 1547 and 1549. Miraculously, he survived his time aboard although his health never quite recovered.

One high point in Knox’s life came in the 1550s when he got to spend various years at Calvin’s Geneva referring to the work there as “the most perfect school of Christ that ever was in the Earth since the days of the apostles”.

Knox himself was held in such high esteem by Geneva that to this day he figures in the centre of the renowned one-hundred-metre-long ‘Reformation Wall’ alongside the statues of fellow Reformers William Farel (1489-1565), Theodore Beza (1519-1605) and John Calvin (1509-64). Enthused with the advance of Evangelicalism on the continent, he sought after a similar revival of the Christian religion in his beloved Scotland. “Give me Scotland or I die!” he prayed.

In due time, the awakening came! Thanks to Knox’s passionate Protestant preaching and his tenacious resistance to the Romanizing tendencies of Mary, Queen of Scots (1542-87), the cause of the Reformation triumphed in Scotland and the Presbyterian Church of Scotland was established. Mary was reported to have confessed: “I fear the prayers of John Knox more than all the assembled armies of Europe”.

Knox was instrumental in penning the ‘Scots Confession’ and the Church of Scotland’s first ‘Book of Discipline’, both published in 1560. Five years before he died, Knox also had the joy of preaching at the coronation service of the young Protestant king James VI of Scotland (or James I of England) in 1567 after the Catholic Mary was forced to abdicate.

Alongside John Knox, William Farel was perhaps the most singularly gifted evangelist of the early Protestants. His figure also appears on the aforementioned ‘Reformation Wall’. Converted to the Evangelical movement in France under the influence of the scholar Jacques Lefevre (1450-1537), Farel was chased out of his homeland and forced to take up residence in the French-speaking areas of Switzerland. Rather than being deterred by the events back home, Farel gave himself wholeheartedly to the work of the Gospel, preaching and debating incessantly in the midst of violent Catholic opposition.

Farel’s labours were blessed to such an extent that various Swiss towns were won over to the Protestant faith. One such town was Geneva in 1532. It was thanks to Farel’s potent powers of persuasion that a young John Calvin was convinced to stay there in 1536 to help advance the cause of the Reformation.

Even though Calvin merely wanted to pass by Geneva to dedicate himself to academic work at Strasbourg, the forceful Farel, “proceeded to utter an imprecation that God would curse my retirement, and the tranquillity of the studies which I sought, if I should withdraw and refuse to give assistance, when the necessity was so urgent. By this imprecation I was so stricken with terror that I desisted from the journey which I had undertaken” (Calvin).

Calvin and Farel ministered together until they were axed from Geneva in 1538. Nevertheless, three years later the Genevan authorities pleaded with them to return. Calvin was not in the slightest bit interested. But it was Farel who yet again induced him to go back. Instead of accompanying his compatriot back to Geneva, Farel decided to dedicate the the rest of his ministerial life to the work of the Lord in the quiet town of Neuchâtel where he died in 1565.