What is my picture of death? What awaits me? Will beauty engulf me, or will I dance on its bosom? Will I finish by myself, or will eternity ravish me with overflowing life. 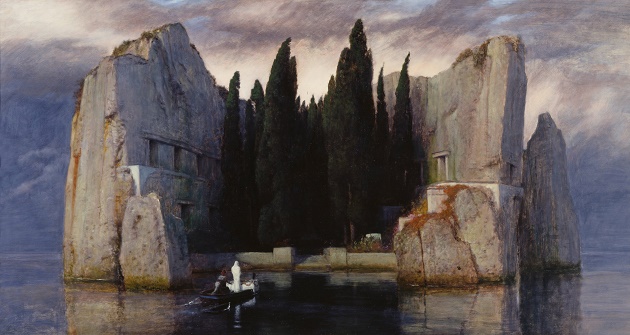 Adolf Hitler spent a fortune in 1936 to buy a painting and hang it in his office. A secluded isle, surrounded by the boundless mysterious sea, is approached by a rowboat, and a figure clad entirely in white faces the water gate. In the rocky walls of the island are carved sepulchral portals, and dark cypress trees dominate the enigmatic center of the picture. Hitler had this painting in his office until the last moment, until he shot himself in his bunker in Berlin.

It wasn’t only Hitler who was fascinated with Arnold Böcklin’s Isle of the Dead. Freud had a copy in his office, and Lenin had one hanging just above his bed.

The painting inspired works by Munch, Max Ernst and Salvador Dalí, a symphony by Rachmaninoff, and Nabokov noted that the painting was to be “found in every Berlin home” in the early 20th century.[1] Böcklin himself described the Isle of the Dead as “a dream picture: it must produce such a stillness that one would be awed by a knock on the door.”[2]

What makes this painting so magnetic? Part of it is its surreal beauty: a funerary island floating on nothingness, with its massive walls unrivalled by the waveless calm of the ocean, the trees and the clouds bending to the whisper of the wind, the last rays of light that illuminate the island growing dimmer and dimmer, as the sun falls into its abyss. Part of the drawing power of this painting emerges from the questions it raises too. Who is that white figure? What is the oarsman feeling? What lies behind the cypress trees? A passage to the underworld, perhaps?

But maybe what attracts us most strongly to Böcklin’s Isle of the Dead is the allure of death drawing close. We can feel a frenzied calm taking over our hearts as “life as we know it” finishes and we are buried into some kind of mysterious destiny. We hear the silence of the moment, the serene embrace of the wind smoothing our skin, the attraction and the fear that dominate us as we approach the center of the island. Our existence approaches its twilight, and we try to take in a last flash of beauty before our eyes close.

Curiously, after five editions of Isle of the Dead, Böcklin painted also an Isle of Life. It is filled with signs of joy and vividness: music, company, dance, intimacy, color, animals, the blue sky, friendship. Instead of the tense magnetism of Isle of the Dead, this painting produces relief. One picture gets us bracing for death, the other relaxes our muscles. In one picture we are the tragic hero; in the other, part of a joyous feast in nature.

These paintings get me thinking. What is my picture of death? What awaits me?

Will beauty engulf me, or will I dance on its bosom? Will I finish by myself, or will eternity ravish me with overflowing life.