Was Jesus Christ the First Transsexual? 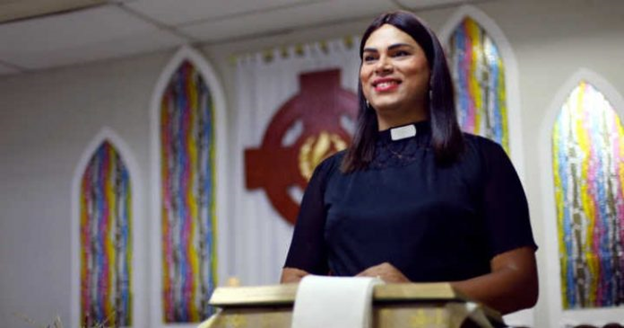 Alexya Salvador, the first transgender “pastor” of the Metropolitan Community Church in Brazil has made the startling allegation that Jesus Christ was the first ever transsexual.

In an interview with the Brazilian edition of the online magazine Vice, Salvador commented that, “Jesus, the Son of God, had the divine gender, didn’t He? But when He came to earth He took up the human gender. If Jesus could change gender, why can’t I?”

So, was Jesus the first transsexual? Here are some thoughts worth keeping in mind.

First of all, Salvador speaks about how she used to be a man and then became a woman. She ceased being a man in order to be a woman. But she forgets that when the Son of God became a man He by no means stopped being God.

The Son of God was God before the incarnation, during His stance on the earth after His ascension to glory. Orthodox Christology affirms that Christ is both fully God and fully man at the same time. Salvador’s proposal, therefore, is the result of faulty theology.

Secondly, the Brazilian pastor fails to realize that Jesus never changed His gender. He did not spend thirty years as Jesus the lad and the last three years of His earthly life as Jessie the lass. He was male from beginning to end and even now He continues seated at the Father’s right hand with His glorified masculine body.

The third problem with Salvador’s statements is that she bypasses the fact that Jesus gave His full support to the creation narrative in Genesis 1-2 wherein God created humankind as man and woman, namely, Adam and Eve. Christ said in unmistakable terms in Matthew 19:4, “Have you not read that He which made them at the beginning made them male and female?” In other words, Jesus was fully convinced that heterosexual marriage was the only will of God. The Lord did not create two men or two women; but a male and a female so that the human race could procreate.

Fourthly, there is also the issue of what Jesus’ Bible taught. He of course read the Old Testament and asserted on numerous occasions the complete reliability of Scripture. Deuteronomy 22:5 formed part and parcel of Jewish Scripture: “The woman shall not wear that which pertains to a man, neither shall a man put on a woman’s garment: for all that do so are abomination unto the Lord your God”. How come? Because, as various biblical commentators explain, transvestitism made a mockery of God’s original design as affirmed in Genesis 1-2 i.e. male and female. Jesus would never have affirmed transvestitism, let alone transsexuality.

Finally, Salvador also claimed in her interview that she has a “prophetic voice” for Brazil and Latin America. With this I wholly agree, but –in the light of Scripture- I would propose that hers is a false prophetic voice which distances men and women from the revealed will of God. Both Christ and the apostles promised time and time again that the church would be stained by the presence of false prophets. Salvador is the last in a long list going way back to the days of the Old Testament.

Was Jesus Christ the first transsexual? No, He was not. Salvador is free to dress as she pleases and to change her gender if the laws of the land permit her to do so. But what she must not do is evoke the name of the Lord of Scripture to justify her rebellion against God. This is to violate both the third and ninth commands.

May the Lord watch over His precious church in these days of great spiritual darkness! May we all keep confessing publically that marriage is for one man and one woman for life, ‘til death do them part! May we all keep preaching to and loving transsexual folk into the kingdom of God!