The Canaries, a dream? 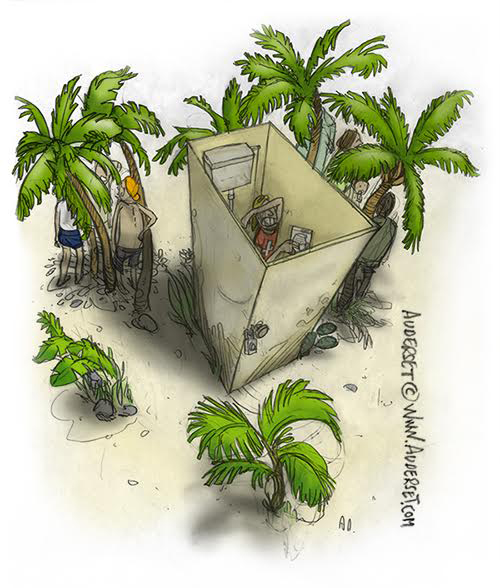 I am in Germany, in a school, facing a crowd of young people who are listening to me attentively (I don’t speak fantastic German, but I gladly give them the little that I have).

If it is true that a ‘success story’ is always stimulating to hear for young go-getters eager to live life to the full, I nonetheless make it my duty to describe to them the beginnings of my life as an artist.

DID YOUR HOLIDAYS GO WELL?

From time to time some of my pals share their holiday ‘concerns’ with me:

“The Viva-las-playas hotels aren’t what they used to be, the soap doesn’t smell of vanilla as much as it used to…”

And it’s up to me (for whom it would have been a dream to go somewhere other than “Ona the Patio” or “Behinda the Housas”) to sympathise:

“Oh, it really is awful what happened to you!”

Memories of a time when, feeling full of shame, I used to rummage in the dustbins of a shop in order to bring back a dessert for my children … (out of date, but still really yummy).  The joy that this brought to them was stronger than my pride.

I don’t much like telling this story, because I look a real loser when my eyes moisten…

I go back to my country by car that very evening. The reminder of that time leaves a strange taste in my mouth, and I speak to God about it during the return journey.

The following morning a Spanish pastor telephones me and invites me … to the Canary Islands!

I was floored. God was in the hall! He listened when I gave my testimony…

And, in a way, that’s where I can really see His humour…

I only have one regret (and a sizeable one):

I haven’t left yet and already I am missing them…

SPAIN THROUGH THE BACK DOOR...

Spanish is my mum’s language; it is very close to my heart. Some people I know and members of my family helped me to translate my first comic book. I then knocked on the door of several Hispanic editors, without success. With my hand worn out from knocking so much, I resigned myself to putting the precious book away in a drawer, where it would lie for several years, waiting for its time to come.

This unexpected invitation is going to awaken the seeds of faith that it contains and at last sow them in the hearts of the Spanish, who are so dear to me.

The pastor of the islands does not have many resources, and yet he is the one who has brought out my book… and has printed 1,000 copies for the occasion of my visit.

He has been the door to a world in which I do not yet exist.

STUCK IN THE LOO!

Nothing can be done, the mechanism must have broken on the inside!!

“Yoohoo! Is anyone there!”

I call out (but not too loudly) to my rescuers who, from the smell, might be disappointed by my internal life…I have a sense (spiritually, I assure you) that the impact of my intervention will be the beginning of something important; however, this door is definitively locked.

Suddenly I notice a small opening beneath the ceiling; I climb up, as if nothing was the matter, ready to say hello to my neighbour (if need be) from up above. I jump down on the other side to head, in double-quick time, in the direction of the stage.

In the hall are almost all the evangelical churches of the island. When I speak, I feel very powerfully the presence of my Friend the Holy Spirit who makes an impact on the audience…

At the end, the pastor of the biggest congregation on the island (which up till then was not officially one of the churches represented), visibly very moved, comes towards me and tomorrow I will speak in his church (even more numerous than this whole hall) promising that next year they will also join in…

To my great surprise the toilet door is now wide open… (??!)

Whether on the plane or in the train, I spread the gospel to all those who had the ‘misfortune’ to cross my path…

Midnight – I finally arrive at my little patch of earth…

My whole family has come to welcome me; it’s like a party and we even go to have a lovely ice-cream.

Published in: Evangelical Focus - Appointment with God - The Canaries, a dream?