The ‘Porte ouverte’ case in France: Evangelicals as “scapegoats”

The evangelical church in Mulhouse that suffered hundreds of Covid-19 cases always complied with the sanitary measures. Despite a media storm and fake news, the evangelical community proactively looked for solutions. 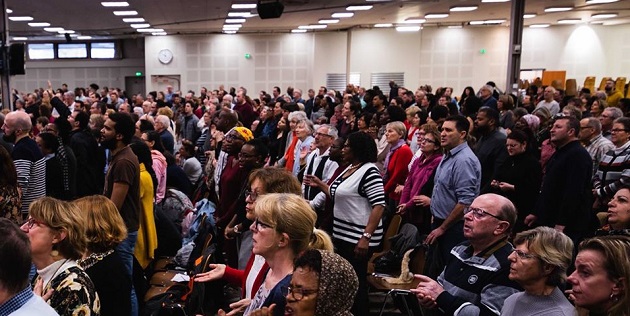 France is the third most affected country in European Covid-19 crisis, with more than 10,000 deaths and 110,000 infections.

Lately, the major media have tried to reconstruct the scenarios to find an explanation to the major sanitary crisis the country is dealing with. This search for a ‘narrative’ has put the focus on one of the few mega-churches in France, the Église La Porte ouverte chrétienne (in English, The Christian Open Door Church) in the city of Mulhouse, north-east of the country.

A prayer and fasting conference was held there between February 21 and 24, which gathered around 2,500 people. Among them, there were members of the local congregatio,n but also representatives of other regions, as well as visitors from the French Guyana (a territory in Latin America) and from neighbouring countries such as Germany, Belgium and Switzerland.

According to the authorities, it was in that conference where the first coronavirus infections of the Grand-Est - a region of 5.5 million inhabitants - happened.

Now we know that at least 20 people who attended the conference have lost their lives, and more than other 70 people have been severely ill.

As they learned about the first symptoms of some of the attendants, the pastor of the Église La Porte ouverte chrétienne, Samuel Peterschmitt, and the leadership of the church immediately asked all attendants to visit a health centre and to self-quarantine. But many had already returned to their cities of origin and even left France. The fact that no registration was needed to attend the conference made even more difficult to reach all those who could have been infected.

Although the Covid-19 has affected all regions of France, the evangelical church in Mulhouse has been the one that has endured much of the weight of media attention in these last weeks.

“An evangelical gathering spread the virus in France”, was the headline of Le Figaro on March 5. Le Monde, another big national newspaper, came to the conclusion that “a week of prayer launched the epidemic in France”.

One of the headlines about the evangelical church, in Le Figaro. / Le Figaro

The Prefect (representative of the State) in the region, Josian Chevalier, had spoken to the media about “an evangelical gathering” in which the needed “measures were not taken”. On a national level, the leader of the La France insoumise party (Insubordinate France) later said in the National Assembly (France’s parliament) that “it was a religious gathering that allowed this infection (...) If they had been Muslims, we would have heard about it for days”.

Yet another political voice, a Senator of the Grand-Est region, accused La Porte ouverte chrétienne of “indoctrinating children” in the school the church runs in Mulhouse.

The church never breached the rules

Bu the truth is that France was in the “Phase 1” of the epidemic crisis. The government had not yet announced severe measures such as the suspension of large meetings.

An example of this is that, according to magazine La Vie, the President Emmanuel Macron attended a political event in Mulhouse on February 18 which was happening only 300 meters away from La Porte ouverte. The French head of State greeted people with handshakes.

It was not until March 6, three weeks after the evangelical event, that gatherings of over 50 people were officially banned.

Later it was known that before the Mulhouse conference, there were around 12 cases of coronavirus infections in places like Paris, which dated back to the second half of January.

“If we had had any doubt [about the danger of infection during the conference] we would have immediately suspended everything”, Samuel Peterschmitt told La Vie. In fact, the pastor said, it was the church which “was ahead” of the measures of the authorities, as they closed the school and suspended all worship services. Later, they started a plan to serve vulnerable people in the city and offered their premises to the authorities to use as a field hospital.

But fake news and imprecise informations added to the “media storm”. Some photos of cars parked in the church’s parking were shared on social media by a neighbour who was trying to prove that La Porte ouverte chrétienne continued with their activities. Only a reduced group of team members was using the building to prepare the online worship services, but the furious online reactions forced to improve the police protection of the building.

Death threats also started against church members, like one that called to “eliminate them with a kalashnikov”. Peterschmitt also spoke of abusive words against members of his family and others of the Christian community in Mulhouse.

In this difficult context, both the church and the National Council of Evangelicals in France (CNEF, the Evangelical Alliance) asked the regional and national governments for a meeting to address the situation - but did not receive an answer. “We have become scapegoats. Only a few people defend us. The silence is deafening”, Peterschmitt lamented.

How has this situation affected the whole of evangelicalism in France? Many would argue that the media attention around the La Porte ouverte chrétienne church has led to unfair stereotypes which present evangelicals as people who, among other accusations, “consider their religion as more important than public safety”.

“We see in France a clear stigmatisation of evangelical Christians”, says Christel Lamère Ngnambi, an expert in matters of faith and society in Europe. “It is a really sad case that affects the witness of Christians. The bad press of these days can severely affect the work that evangelicals have done in the last 10 or 20 years to show who they really are”.

Lamère also believes that the church in Mulhouse reacted to the crisis with “transparency” and always seeking a dialogue to look for solutions, but was did not receive the same treatment on the side of the authorities.

Evangelical Alliance: no to scapegoating

A group of leaders of Pentecostal churches of around France published on 14 March an open letter titled “I defend!”, in which they expressed their support for the church: “We defend pastor Samuel Peterschmitt, we defend the team that has been so admirable during this media tsunami,  and we defend all Christians who belong to this probed church”.

The French Evangelical Alliance (CNEF) has also demanded a fair treatment for the evangelicals in Mulhouse. In an interview with InfoChrétienne, the director of their pastoral service for parliamentarians, Thierry Le Gall, expressed their profound “compassion” with not only all relatives of Covid-19 victims, but also with “this church, unjustly under the fire of the media and social media”.

Le Gall alerted that “in all big crises of history, the necessity appears of finding a scapegoat. It is very demagogic to do this, but it is an easy way out to try to reduce a national problem to a specific community and make them responsible of the problem. This time, it has been us, the evangelicals”.

“Prayer”, added Le Gall, “is essential today in the situation we are going through”. “We do not have specific information about what is the precise cause of this pandemic. But God knows. He is there to provide help, to comfort the hearts of all those who suffer. And he is listening to us”.