Are neurosurgeons ready to ‘walk’ through brain with 3D holograms?

Developers claim this is the first ever 3D digital hologram of the human brain fibre connections. The tecnique is called “Fibre Tractography”. 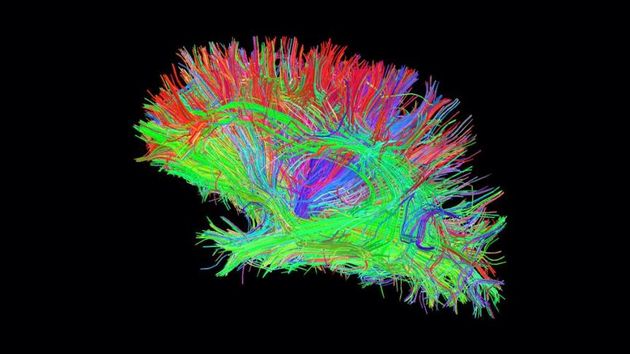 The first ever 3D digital hologram of the human brain fibre connections. / Euronews

Neuroscientists have completed a hologram which could one day allow doctors to peer into a complete 3D image of their patient’s brain. According to some clinicians, the hologram is the next step forward from MRI scans.

Taking a walk inside your brain may sound like science fiction, but the researchers who created his hologram believe it takes us a step closer.

The team at 3D developers Holoxica in Scotland, claims this is the first ever 3D digital hologram of the human brain fibre connections.

The hologram of a healthy brain was made by a technique called “Fibre Tractography”. It tracks nerve fibre pathways inside the brain, by measuring the movement of water molecules in the brain’s white matter.

Developers claim the use of holograms will have a profound impact on medical science allowing clinicians to identify, diagnose and treat a wide range of neurological conditions.

Dr. Basil Ridha, neurosurgeon and Alzheimer specialist at Britain’s National Hospital for Neurology and Neurosurgery, says he is interested in the technology’s future potential.

“If you have a degeneration, or you have areas of inflammation, or a stroke... To visualise and see how anatomically all these impacts on surrounding structures and pathways is vital, so the brain now is not only the location of a lesion, but what networks pass through that area is of importance. Sometimes we want to know, for example, the visual pathways involved in a particular lesion”, he said.

Ridha adds that “the brain is a very complex three-dimensional structure, and sometimes it is quite difficult to describe or to understand the actual connections. So to see it in 3D may be a short-cut to education and it can reinforce the learning process.”

The 3D holographic display was backed with cash from the EU’s Research and Innovation budget.

WATCH the video produced by Euronews:

Published in: Evangelical Focus - science - Are neurosurgeons ready to ‘walk’ through brain with 3D holograms?