“The country is calm and peaceful”, say Guinean evangelical leaders after the coup

The military announced a government of national unity. Guinean evangelicals ask to pray “for the unity of the church, socio-political stability and support to promote the gospel”. 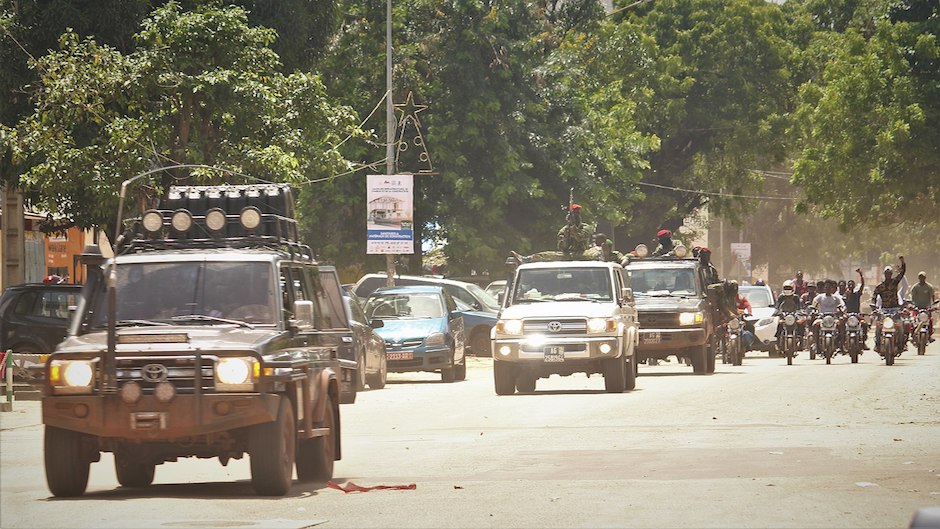 After an unexpected coup d'état, the president of Guinea Conakry, Alpha Condé, was arrested last Sunday.

In images released on social media, the president was shown sitting in an armchair, barefoot, wearing a crumpled shirt and jeans, surrounded by a group of soldiers in uniform who held up their rifles and looked at the camera.

“The arrival of the military in power has been a surprise. Nobody knew what was coming. The people of the capital [Conakry] woke up on Sunday morning to the sound of guns, but no one knew anything. It was only in the afternoon that the population was informed of the arrest of the President”, Isaac Mara, pastor of the World Alliance Community Church in Guinea, told Spanish news website Protestante Digital.

The coup was “fast”, pointed out Emmanuel Ouamouno, pastor of an Assemblies of God church in the country and also head of the evangelical radio communication ministry IBRA.

“Imagine that in 30 minutes the president of a nation is arrested like a simple thief and there is no damage or bloodshed. Even the presidential guards have not opposed the special forces led by Colonel Doumbouya. I am very surprised to see this. I think the coup was very well prepared. All the people seem to be happy”, added Ouamouno.

Hours after the coup, its author, Colonel Mamady Doumbouya, and the Special Forces he created in 2018 after being commissioned by the Ministry of Defence, announced the dissolution of the institutions and the government, the suspension of the Constitution and the closure of land and air borders.

“The socio-political and economic situation of the country, the dysfunction of republican institutions, the instrumentalisation of justice, (...) the lack of respect for democratic principles, the politicisation of the public administration (...), endemic poverty and corruption have led the Guinean army (...) to assume its responsibility towards the sovereign people of Guinea”, justified the military officer. 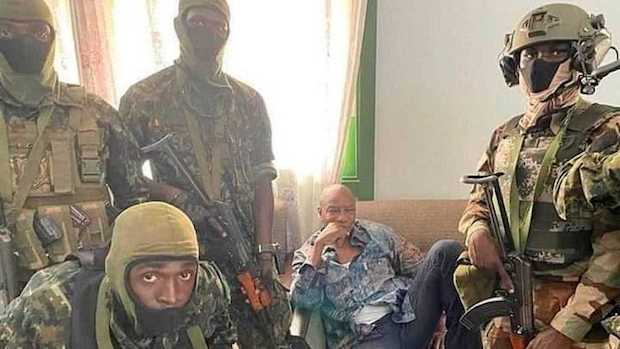 President Condé, after his arrest by the military. / Screenshot RTVE.

Within hours, the military board confirmed the creation of a government of national unity, reopened the land and air borders, albeit with controls, and announced other measures, such as the release of several of Condé's political opponents who remained imprisoned, including Oumar Sylla and Abdoulaye Bah.

Colonel Doumbouya has also publicly called on foreign investors to remain calm. Guinea is the world's second largest producer of bauxite, a rock that is the main source of aluminium. After the coup, its price has reached its highest value since 2011 on the London Metal Exchange.

“We want to place this new transition under the sign of hope and of a new Guinea, reconciled with itself, with all the children of the country. (...) There will be no spirit of hatred, revenge or witch-hunting”, said Doumbouya in a conciliatory tone and also holding out his hand to members of Condé's cabinet.

United Nations Secretary General António Guterres, said on Twitter that he was personally following the situation in Guinea very closely. “I strongly condemn any takeover of the government by force of the gun and call for the immediate release of President Alpha Conde”.

United States condemned the coup in a statement, warning that “violence and any extra-constitutional measures will only erode Guinea’s prospects for peace, stability, and prosperity”.

Guinea's National Council for Regrouping and Development, the name chosen for the military-led transitional government of national unity, now faces sanctions by the African Union and the Economic Community of West African States (ECOWAS).

Alpha Condé: the failed dream of democracy in Guinea

“After the coup the Guinean people have placed high expectations on the soldiers and really want them to make the transition as soon as possible, organising transparent, free and inclusive elections”, underlined Tamba Alexis Kondiano, co-founder of the platform 'Christians of Guinea', a Facebook page created during the pandemic which aims to “promote the Word of God”.

Despite these expectations, “we cannot lose sight of the fact that Alpha Condé comes from a community where he has 90% support, so some people are afraid of what might happen in Guinea”, he added.

Alpha Condé was the historic opposition leader during the dictatorship of Lansana Conté, in 2010 he won the first democratic elections held in the country, which had gained independence from France in 1958. 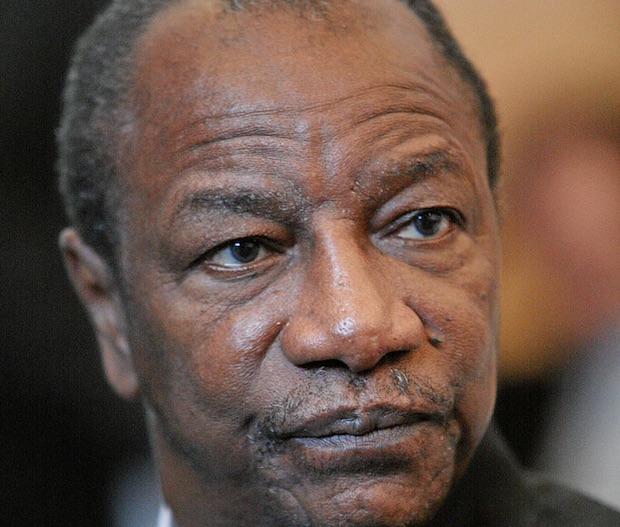 President Alpha Condé was the first to win a democratic election in the country, in 2010. / World Economic Forum, Wikimedia Commons.

After two consecutive terms in office and economic growth of up to 7% annually, Condé changed the constitutional limit for a third term before the controversial presidential elections of October 2020, which ended with dozens of people killed in clashes as he claimed victory.

“The socio-political situation had worsened since the former president took office for a third term, following multiple demonstrations organised by the opposition to reverse the third term. Given all these events, the increase in fuel prices, and the high cost of living, the climate in the country was really tense and President Condé increased the anger of the population day by day”, explained the Guinean Christian.

According to Kondiano, “Guineans are not surprised by his departure, but only by the image of the country, because we expected it to be peaceful and non-violent, as we have now experienced after the involvement of the military”.

Pastor Ouamouno pointed out that “the country is calm and peaceful now”. “If the army governs the country, there will be calm for the population and, why not, peace. Guineans are tired of political struggles and life is more expensive today. If the army takes on the needs of the population, it will be difficult to take power out of their hands. We have the example of Paul Kagame in Rwanda. Everything will depend on how the army behaves”.

Evangelical leaders in Guinea say that, for now, it is expected that the coup will remain in the political sphere and will lead a transition without negative consequences for rights and freedoms, such as religious freedom.

“The situation of the churches in Guinea before this coup was good, despite the discrimination and moral and sometimes physical persecution of Christians in some parts of the country”, said Kondiano.

Ha added that “in general, we live together in coexistence, accepting this way of life imposed by the Muslim majority. Since 2012, evangelical churches have been growing and getting a foothold in all regions of the country”.

Mara agreed that, “for the moment, coexistence between the church and other religious groups is going well. The only difficulty is that the country is predominantly Islamic, so it is difficult for a Christian to find a job or accommodation if the landlord is Muslim”.

According to the Joshua Project, more than 88% of the population in Guinea are Muslims, while only 4% are Christians, and just 0.7% are evangelicals. 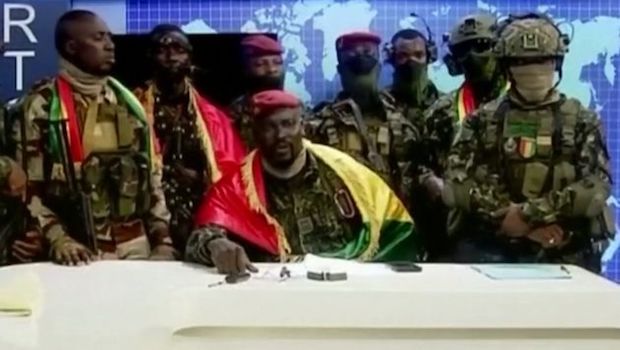 A group of soldiers with Colonel Mamady Doumbouya seated in the centre, delivering a message on national television. / Screenshot, Rádio Télévision Guineé.

This is one of the keys that could have curbed the influence of jihadism in the country, located in a region where radical Islamism has grown in recent years and expanded its control through armed groups.

“Guinea is the richest country in this area. Secularism is in the courts, but that does not prevent some kind of persecution against us Christians. The persecution is slow and non-violent, but we have problems getting places of worship in certain areas of the country, and a ban on talking about Jesus in those areas. All in all, jihadism has not yet started in Guinea”, said pastor Ouamouno.

The Guinean church in the face of the pandemic

The incidence of coronavirus infections in Guinea has remained low during this time of pandemic, with an average lower than that of Africa as a whole, according to the platform 'Our World in Data'. At the same time, the country exceeds the overall vaccination rate for the continent (5.12%), with just over 6% of its population vaccinated.

However, “the pandemic has shocked the church. In the congregation I pastor there have been two infections. Many people have also suffered because they had no food”, stressed pastor Oumaouno.

For the pastor, collaboration between entities and organisations has been key, and he is grateful to the “Africa service ministry, a branch of Open Doors, which has come to help people in difficulty. We also often receive donations from other countries to support the church in Guinea”.

Pastor Mara agreed that “the pandemic has greatly affected the life of the churches, especially financially and by decreasing the number of people during Sunday services due to the difficulties”.

That is why evangelical Christians in Guinea have had to think of initiatives to continue sharing their faith in the midst of restrictions, such as 'Christians of Guinea'. “To respond to this situation, we young people decided to create a digital platform that allows all Christians to access prayer using their smartphones”, explained Kondiano.

While waiting to see what the fall of the government brings, the evangelical leaders call on Christians worldwide to pray “for the unity of the church in the country, for socio-political stability and for material support to carry out several projects that seek to promote the gospel in Guinea”.

Published in: Evangelical Focus - world - “The country is calm and peaceful”, say Guinean evangelical leaders after the coup