US: Over half of pastors deal with mental illnesses on a regular basis

A study shows that 26% of pastors have personally struggled with mental issues. Most leaders talk about mental health at church and feel equipped to provide help. 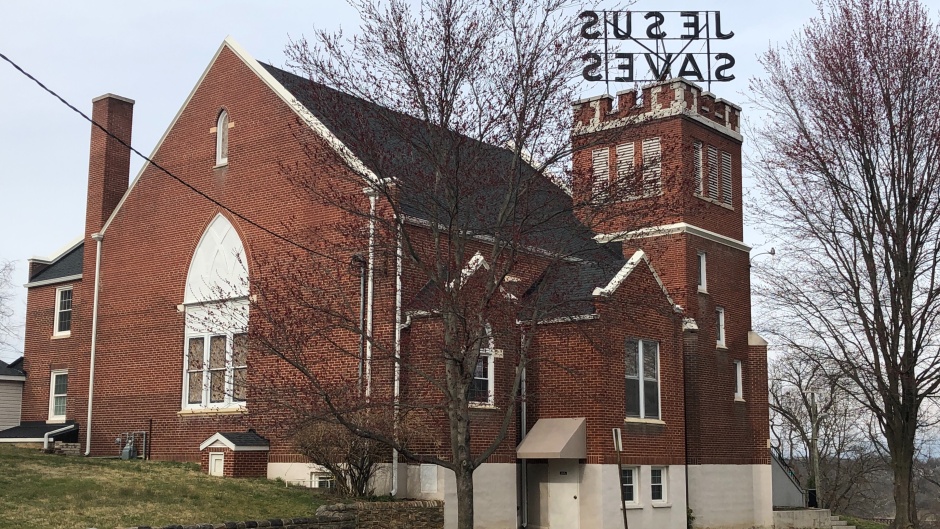 Lifeway Research has released a study about mental illness within Protestant churches in the United States and how pastors and churchgoers deal with it - personally and as a congregation.

According to the study, 54% of the pastors said they “have known at least one church member who has been diagnosed with a severe mental illness such as clinical depression, bipolar or schizophrenia”.

Scott McConnell, executive director of Lifeway Research, explained that “there is a healthy generational shift occurring as younger and middle-aged pastors are much more likely to have encountered people in church with severe mental illness than the oldest pastors”.

“However, it is not clear whether the presence of those with difficult mental illnesses is increasing among church members or if they have simply felt more comfortable sharing their diagnosis with younger pastors”, he added. 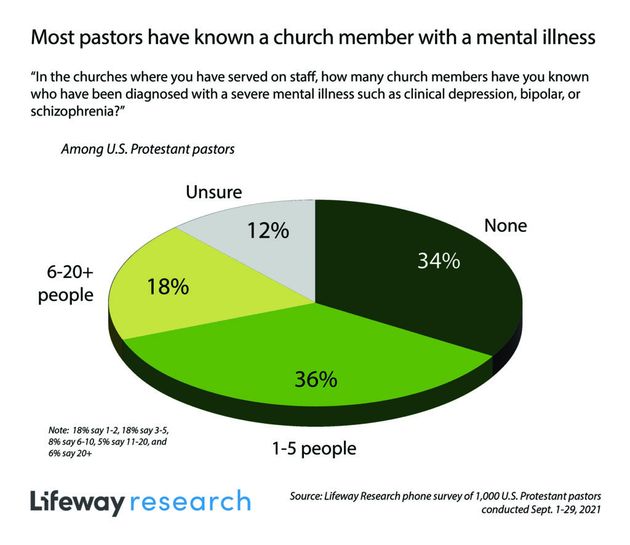 Researchers have also analysed how mental illness affects pastors personally, considering that “26% say they have personally struggled with some type of mental illness, including 17% who say it was diagnosed and 9% who experienced it but were never diagnosed”. 74% responded they had never had a mental illness.

The study also shows that “pastors under 45 (37%) are the most likely to say they have endured mental illness”.

“While the typical pastor has not experienced mental illness themselves, they are proactively teaching about this need and feel a responsibility to help”, pointed out McConnell.

Despite this, he warned that “still 37% of pastors rarely or never bring it up from the pulpit”.

The study also states that “60% pastors say they speak about acute or chronic mental illness in sermons or large group messages at least once a year. For more than 2 in 5 pastors, the issue comes up multiple times a year, with 30% talking about it several times a year, 9% about once a month and 4% several times a month”.

Compared to data of the 2014 study, “when 49% said they rarely or never spoke about it […] pastors are more likely to broach the subject in a large group setting today”.

The majority of the pastors surveyed (89%) agreed that “local churches have a responsibility to provide resources and support for individuals with mental illness and their families”.

Among those pastors, 86% feel equipped to identify when a person is dealing with a mental illness that may require a medical professional intervention, while 12% do not feel equipped.

“In the years between studies, more churches have developed plans for supporting families of those with mental illness. A few more are offering training for leaders to identify symptoms of mental illness and hosting groups such as the National Alliance on Mental Illness”, stressed McConnell.

According to the study, “the most common way for a church to care for someone with mental illness is to have a list of mental health experts to refer people to”. 68% of the churches surveyed have it. 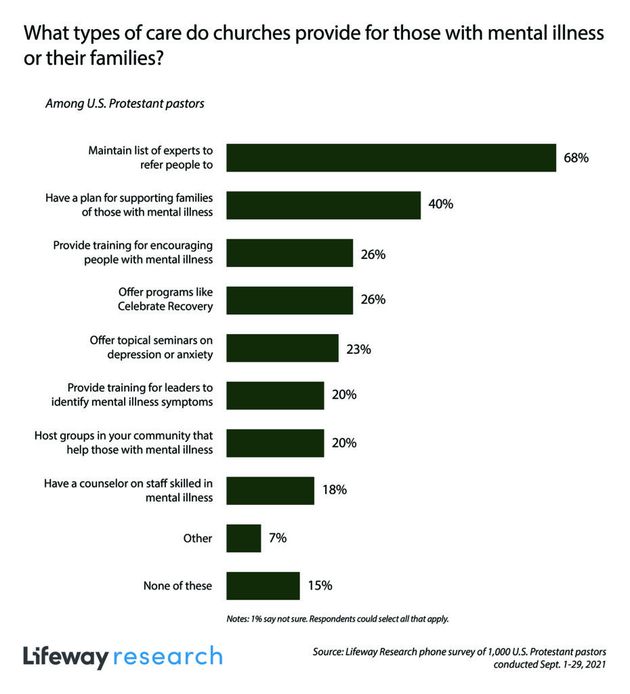 Furthermore, 20% of the churches provide training for leaders to identify symptoms of mental illness and host groups in their community that help those with mental illness; 18% have a counselor on staff skilled in mental illness; and 7% say they provide other resources.

Published in: Evangelical Focus - world - US: Over half of pastors deal with mental illnesses on a regular basis