Authorities in the eastern Chinese province of Zhejiang have banned all forms of religious activity in hospitals in an ongoing crackdown targeting the region's burgeoning Protestant Christian community. 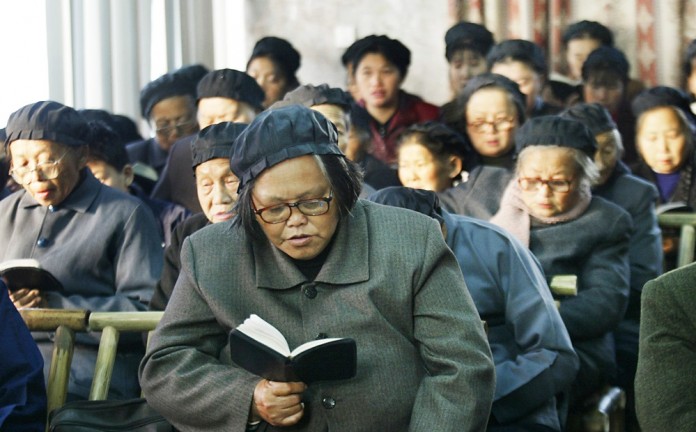 An evangelical church in Zhejiang province

A public notice posted at the Central Hospital in Zhejiang's Wenzhou, a city that has been dubbed "China's Jerusalem" because of its high concentration of christians, made patients and their visitors unequivocally aware of the new rules this week.

"Religious activities are banned in this hospital," the notice said. The Wenzhou Central Hospital was originally set up as a protestant hospital.

An employee who answered the phone at the same hospital on Thursday confirmed the new measures.

"Religious activities in hospitals have never been encouraged ... but some people have been doing it on the quiet, which is understandable, seeing that we are all here to support patients," the employee said.

The new rules don't just ban patients from carrying out religious activities like prayer or preaching; they also prevent ministers or pastors from holding prayer meetings for patients in hospital.

"Some people were really giving it their all, praying aloud and reading out the Bible," the employee said. "That's not allowed."

"The order is shown to patients when they are admitted to hospital telling them that no religious activities are permitted in the hospital," the employee said. "If they do that here, then the nurses and doctors will have a word with them."

"They are interfering with people's religious beliefs, which is against the constitution ... because Chinese citizens should have the freedom to choose their religion, or to have no religion," Ma told RFA.

"I think it's perfectly normal ... people depend psychologically on their religious beliefs to a certain extent," Ma said. "If they are dying, for example, they know that they have nothing to fear."

"Religion empowers people ... to be more optimistic and accepting of their treatment program," he said. "It helps them face up to times of illness, and also to face up to their own mortality."

An employee who answered the phone at the Zhejiang provincial religious affairs bureau declined to comment, saying they didn't know much about the issue.

The ban comes after a province-wide crackdown on churches and an urban "improvement" campaign which has seen crosses removed from dozens of buildings.

Earlier this year, Zhejiang Protestant pastors and married couple Bao Guohua and Xing Wenxiang of the Holy Love Christian church were sentenced to 14 and 12 years' imprisonment respectively by the Wucheng District People's Court in Zhejiang's Jinhua city after they opposed the removal of crosses.

Police-run detention centers in the province have also denied family members’ requests to deliver Bibles and food to the detained, according to the U.S. State Department's 2015 religious freedom report.

Meanwhile, the authorities view many forms of religion as dangerous foreign imports, with Zhejiang officials warning last year against the "infiltration of Western hostile forces" in the form of religion.

And the crackdown looks set to intensify and widen to other regions of China.

Zhejiang has been lauded by the ruling Chinese Communist Party's ideological arm, the United Front Work Department, for "tackling ... the difficult-to-tackle problems, grasping norms, strong management and promoting harmony and stability," according to a report on the official website of the State Administration for Religious Affairs.

Furthermore, this "new situation in religious work" will require an even stronger policy response, the article said, adding that responses will be "problem-oriented, targeted, and pay attention to guidance."

Bob Fu, founder of the U.S.-based Christian rights group ChinaAid, said the Zhejiang crackdown is now being extended into other provinces, including Anhui and the northern region of Inner Mongolia.

"The Chinese government is taking its persecution of religious believers to another level," Fu said.

"They are doing it in the name of the rule of law, but actually it's very clear that there is an element of wanting all religion to be Chinese in character," Fu told RFA in an interview on Tuesday.

"The international community should be aware that are stepping up the pressure on religious practice, so that there is gradually less and less freedom," he said.

The State Department appears to agree with Fu, saying in its latest report that Beijing continues to exercise state control over religion, restricting the personal freedom of religious believers.

It cited a 2012 Pew Research Center report estimating that China is now home to some 68 million Protestants, of whom 23 million worship in state-affiliated churches, and some nine million Catholics, 5.7 million of whom are in state-sponsored organizations.