Morocco: No more hiding for Christians

“Morocco is changing, Mohamed VI has said that he is the king of all Moroccans: Christians, Jews and Muslims”, says Mustafa. “Seven of us came out of anonymity, trusting that God would protect us.” 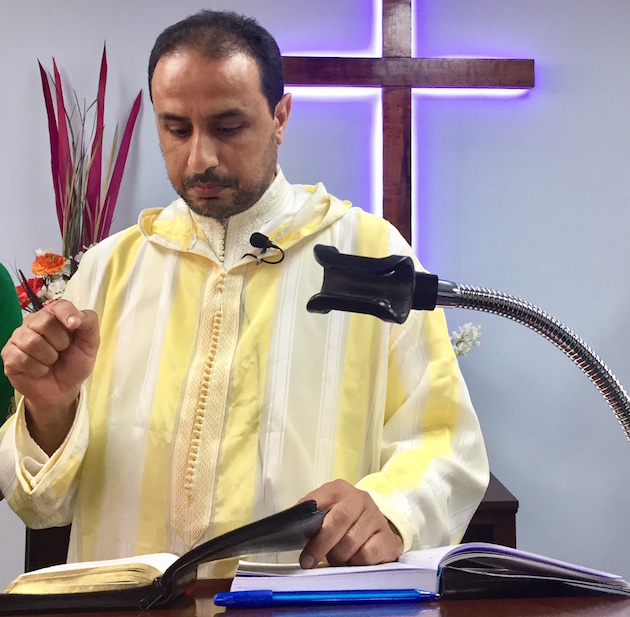 The meeting takes place on a public site. "It is said that there are 150,000 Christians, but we say that we could reach a million. There is no a place in the country where there is not at least one Christian; in some cases, there are several in the same family but they do not know about each other. The day that the laws change and religious freedom is a reality, everyone will come to the light and we will realize that we are many”, says Mustafa, a Christian leader from the south of Morocco (last name omitted to protect his family).

The story of this 46-year-old man is unique. He came to Christ in 1994 after several years of spiritual search. He belongs to a well- known and respected family in the city. His ancestors were imams and his father wanted him to follow them, he sent him to the mosque to study the Quran when he was five.

"When I was seven, the imam was explaining the history of the prophets and when he mentioned Jesus, I listened carefully and then I asked him: Can we say that Jesus is the Son of God? He replied: No, we do not say it, those words are of the Christians, I do not want to hear you say that again!", Mustafa recalls.

When he finished primary school, his father did not allow him to enter the next level, instead he sent him to a well-known Islamic center, where people who became presidents of countries like Senegal and Ivory Coast, had studied.

Soon, Mustafa was contacted by a group of Islamists: "They invited me to work for their movement. I was very active and when they saw my potential they sent me to a school of leaders. After six months of studies, I was in charge of the southern part of Morocco." 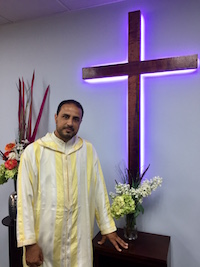 Studying Islam in depth, our interviewee found out details that he did not like. "I was in a search for God, I did all the things that Islam says: praying five times a day, fasting the month of Ramadan, etc., but I did not feel God filling my heart. I needed something more! The more I studied, the more I perceived contradictions and even lies, so I decided to look at Christianity and other religions", he explains.

Mustafa talked a lot to his teacher and asked him questions. "One day he told me: You talk a lot about Jesus, I'm going to give you the address of a school in Spain, so that you can contact them. Surely he believed that I would write against Christianity. I contacted this school and started to receive books and Bible lessons. The more I read, the clearer I saw that Islam is not a religion of God.”

The moment came when he had to face the truth. "I knew that Islam is not the truth, but I did not know what to do. It is very difficult to get out of Islam. I decided to pray to God directly, without Islam and without Christianity.”

“I simply said: God you created me, tell me where to go. I continued praying, and one day this idea came to my mind: Pray in the name of Jesus. I did it and a great freshness filled my heart. In that moment I decided to be a Christian and my life was full. There have been six years of searching, studying and comparing the Quran and the Bible."

“I WAS NOT THE ONLY ONE”
When Mustafa he told his family that he believed in Jesus Christ, he was rejected. They told him that he no longer belonged to the family. He thought he was the only Christian in Morocco, but a year after he declared his faith to the brothers of the Spanish school, he received an invitation letter for a Christmas celebration in a nearby town. When he arrived at the place, he met 30 other Moroccan Christians.

In 2000, he went to Rabat to study a three-years course, and during that time he met with a Christian community, a home church. When he returned to his hometown, he had the idea of founding a church.

"I talked to the Christians I knew and they told me I was crazy. Are you going to build a church in the heart of Islam? they said. I started to have meetings at my house. When the group grew, we went to the mountain on Saturday and returned Sunday. We were eighteen people.”

In 2005 they were still eighteen, and Mustafa “wondered what was going on, why the Word did not reach others. We decided to go out, not to stay confined. We could not give Bibles but we ourselves are a Bible and reflect the love of God. We started to build relationships and help people, and people started to love us."

It was not easy. "Islamic groups wanted to stop us, but they have not succeeded. We lived very strong things, the Salafists tried to take our children away. In the midst of all this, we have always seen the protection of God", he says.

In 2016, he and other leaders decided to make themselves known as Christians to represent others in claiming their rights.

"Seven of us came out of anonymity, trusting that God would protect us. We went to the media, television, newspapers, digital media." 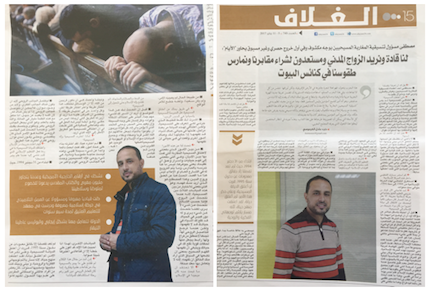 By doing this, they look for a change of mentality in the population: Being Moroccan does not necessarily imply being Muslim.
The decision is made. "We believe that God can make many changes in the world with one person. He tells us: Just start, I will help you but there is a condition: you start, knock the door, and I will open", Mustafa points out.

Last January, he was interviewed by newspaper Alayam (Casablanca). In an extensive interview, he had the opportunity to express what Christians believe and what are the rights they claim, among other issues.
Along with other Christians, he has created an internet radio station and a channel on Youtube.

The King of Morocco, Mohamed VI, known for his defense of an open and tolerant Islam, is also Amir al Mouminin, the Prince of Believers. In 2016, during a trip to Madagascar, the monarch said that he is the Prince of all Moroccans, whether Muslim, Jewish or Christian.

Mustafa believes that "this statement is a sign that is giving to Christian believers." Along with other leaders of the movement, he signed a thank you- letter to the king. "We wanted to stop, express our gratitude to him, for being the Prince of the Christians too." 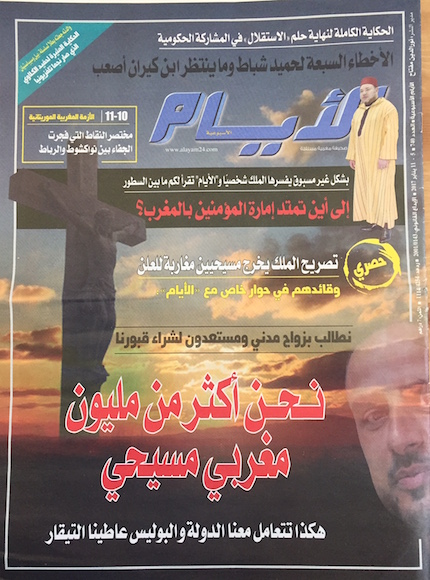 There have been other signs of a new times in Morocco recently. "The Minister of Islamic Affairs, Ahmed Towfique, made interesting declarations. He said that Morocco is for the other religions as well and that we are a democratic, open country. Something is changing! ", says Mustafa with joy.

He also recalls that in 2012 the Supreme Scientific Council said that if anyone leaves Islam, deserves to die. Bu recently (January 2017), the same council declared that any citizen has the right to stay in Islam or to leave.

"This does not mean a change in the laws yet, they are just declarations. But we are asking gor a change in the law that guarantees religious freedom to all Moroccans", he states
Last year the group decided to hold a big public Christmas celebration, and they strategically extended invitations, not only to Christians, but also to some more open Muslims, presidents of political parties, journalists, writers, intellectuals, human rights activits.

They rented a salon for wedding parties in Casablanca and on December 25 they had a celebration with a worship time, a biblical message and testimonies. The media echoed this event and the fact that there are Christians in Morocco was known countrywide. 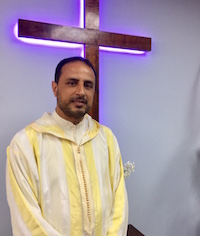 Q. Mustafa, are you afraid to expose yourself publicly?

Q. What happens to the families of those who claim to be Christians?

A. Relationships are broken, it may happen that the family members stop talking to them.

Q. Have your family relationships been affected?

Q. Do you think the day will come when Moroccan Christians will be free to make themselves known?

A. That's the idea. Especially some young people are doing it and we want to encourage everyone to do it too. Many want to do it, but do not know what can happen to them, that is why we decided to go out publicly, to tell them that nothing will happen.

Q. Is society open to the idea that one can be a Moroccan and a Christian?

A. Educated people readily accept it, even if they are not Christians. Among ordinary people, there are those who begin to understand. “There are Christians among us”, they say. There are also those who say: “There must be no Christians.”

Q. What is the next step?

A. To keep working, so that one day all Christians will come to light and the world will know that there are many Christians in Morocco. In order to achieve that, the laws have to change. We must keep fighting for of our rights, peacefully and lovingly. We ask for the validity of civil marriage (now, only the Muslim marriage is valid), the right to have land for Christian cemeteries, and a secular education.

Q. What message do you want to send to the Christian Moroccans?

A. If you want your rights, ask for it. The government is not going to give a right just like that. Christians should ask for it.

Q. Anything else you want to add?

A. I thank our king for saying that he is the prince of all Moroccans. It is the first time in the history of our country that this is said. And we, the Moroccan Christians, are very happy with this statement.