A Christian organisation working with children in the region: “Pray that God protects us and gives us wisdom to understand how we can be useful in times like these.” 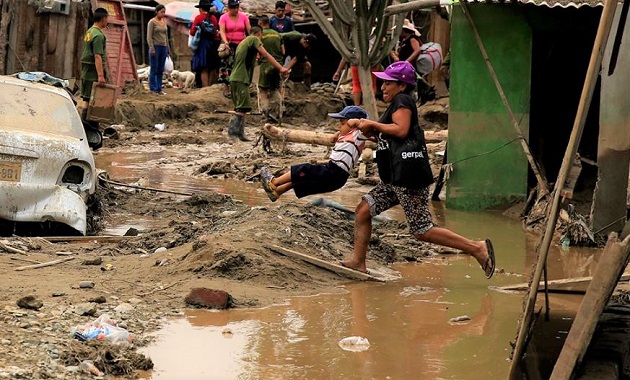 A woman and her child crosses a flooded road in Peru. / Reuters

At least 100,000 people in Peru have been directly affected by the floods that have brought devastation to the north of the Latin American country.

Water, mud and stones have damaged more than 134,000 houses and have affected 33 motorways.

According to official figures, 75 people have died and hundreds have been injured.

In the north of the country, several areas are still isolated and the government is working to reinstall basic infrastructures.

The climatic emergency is related to what is known as the “Niño costero” (‘coastal kid’). The unusual warming of a region of the Pacific Sea has evaporated much water and later condensed it in the Peruvian hills. This formed storms which later caused the rivers to overflow.

Workers of a Christian school project led by evangelical Christians in the region of Huaraz said their “Turmanyé Project” house was isolated for three days, due to damaged roads. Primary schools, it was announced, would be closed until April 3.

“We thank God for a mining company in the region that came to work on these motorways, they have powerful machinery”, the Director of the education project working with children, said.

“Pray that God has mercy on this country, that He will keep protecting us and give us wisdom to know how we can be helpful in times like these.”

The government has announced new heavy rains are expected for this week. Peru has not gone through such an emergency since 1925, when the city of Trujillo was devastated.

Initiatives to support the victims have been propelled by Peruvians from non-affected regions: water, non-perishable goods and clothes are being collected. The President of the country, Pedro Pablo Kuczynski, already spoke of the need for a big plan to reconstruct large areas of the country.