The letter calls on the authorities to take the necessary steps to ensure Christian basic rights, like freedom of worship, and the oficialisation of churches, among others. 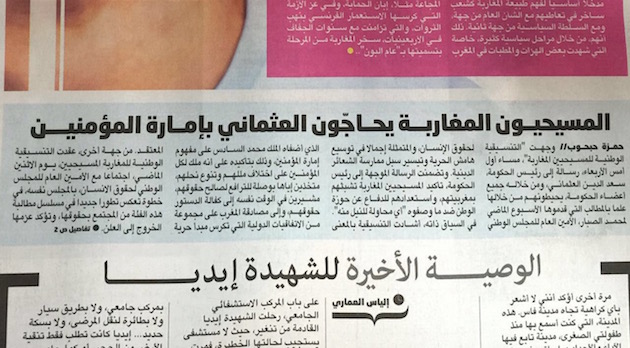 The newspaper La Dernier Heure has already informed about the sending of the letter. / LDH

After meeting with the National Human Rights Council a couple of weeks ago, a group of Moroccan Christians decided to go one step further in their claim to religious freedom.

The letter was sent by postal mail and, according to the spokesman, should arrive in the office of the Prime Minister between Tuesday and Wednesday this week.

"We have told him that we have submitted a petition to the National Human Rights Council, and we have asked him to help us to achieve our rights if the letter reaches him. We tell him that we hope both of them will support us and the government will treat Christians just as the king wants, when he said that he is the prince of all believers in Morocco, Christians, Muslims or any other creed alike", said the spokesman.

The newspaper La Dernier Heure has already informed about the sending of this letter.

Among the petitions submitted to the National Human Rights Council on 3 April, are basic rights such as freedom of worship, the celebration of civil marriages, cemeteries for Christians, the possibility of naming their children after biblical names, the right for their children to decide if they want or not to take the Islamic religion class at school, and the formalisation of Christian churches.

For now, Christians have their meetings hidden in houses.

Never in the history of Morocco have conversions to Christianity been tolerated. Those who have left Islam and embraced Christianity have been judged and jailed.