India: Christians rise up against attacks by Hindus 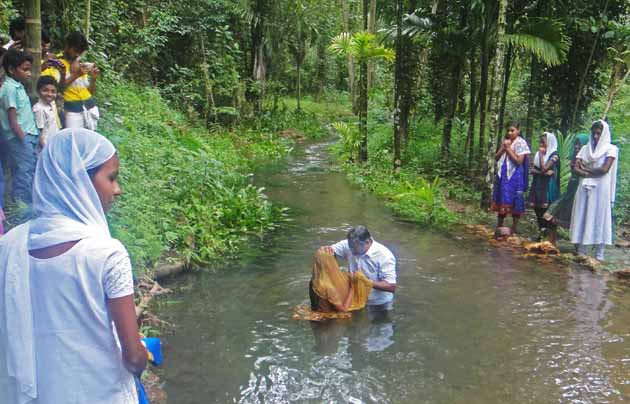 Baptism of a convert to Christianity at an undisclosed village in India. / Christian Aid Mission

In India Christians have set up an interdenominational agency for legal advice with a hotline. This is their reaction to the attacks by extremists which have increased since the nationalist Hindu party came to power in 2014.

The United Christian Forum for Human Rights (UCFHR) was brought into being on 19 January in New Delhi. It aims ‘to coordinate both legal and advocacy assistance to the community, which has been traumatised in recent months by communal violence in several states,’ as John Dayal, a prominent Christian activist and spokesperson for the group, said. Attacks on Christians have increased in India since the nationalist Hindu party BJP won the parliamentary elections in May 2014.

The Catholic Bishops’ Conference of India also called on the government to ‘uphold the secular character of India’. They said that the attacks on Christians recently had, for many, ‘shaken the faith in the secular fabric of the nation’, and that since 2014 the efforts to make India into a Hindu nation had clearly increased.

"The UCF has commissioned a 24-hour National Helpline (number 1800-208-4545) so that lawyers and experts can assist victims of violence, intimidation, coercion and illegal confinement by any criminal or political group,” the organisers reported in their press release. “We have had more than 4,000 calls already. Most of them are out of eagerness to verify if it is working and also to express solidarity,” said Tehmina Arora, a lawyer with the ‘Alliance for Defending Freedom in India’. But already, three cases of serious harassment and obstruction of Christians have been reported.

The Indian Evangelical Alliance registered at least 144 cases of attacks on Christians in 2014, 31 of which were in December alone. These include physical violence, false accusations, disruption of church services or Christmas events, hate campaigns and pressure to convert to Hinduism. “The United Christian Forum has come together so that we are able to ensure that the voice of the persons in the villages … reaches New Delhi,” the chairman Michael William declared.

Coordinator A C Michael described the United Christian Forum as more of an ‘action group’. In the forum, Christian networks are working together, like the Evangelical Alliance of India, the Christian Lawyers’ Association and the Alliance for Defending Freedom. They do not intend to involve church leaders directly. Spokesman John Dayal declared that the Christians in India should counter the growing pressure first and foremost ‘on bended knees’, but added, ‘but bended before God. Not bended before man and not bended before non-state actors or (the) state itself. India is our motherland, and we claim our rights as children of God and citizens of India with the Bible in one hand and the Constitution of India in the other.”

On the occasion of his visit to India this week US President Barack Obama also addressed the sensitive issue of freedom of religion in India. Without mentioning the Hindu party explicitly, he quoted from the Indian constitution: “Your article 25 says that all people are equally entitled to freedom of conscience and the right freely to profess, practise and propagate religion. In both our countries - in all countries – upholding this fundamental freedom is the responsibility of government, but it’s also the responsibility of every person,” appealed Obama in a speech to predominantly young Indians in New Delhi.

During his three-day visit Obama established warm relations with President Modi, who just one year previously was a persona non grata in Washington and was not permitted to visit the USA for almost a decade because of violent attacks by Hindus in a state which he governed. The USA is seeking, with strengthened links to India, to create a counterbalance to the growing influence of China.

Published in: Evangelical Focus - world - India: Christians rise up against attacks by Hindus