At least 59 killed in worst US mass shooting

The gunman fired against a big crowd attending a Country festival in Las Vegas. 527 people have been hurt. 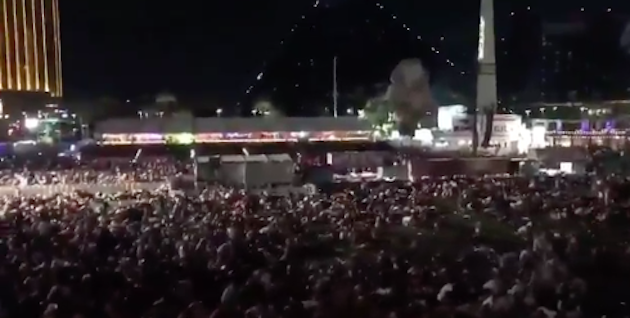 Thousands were attending a Counry music festival when the gunman killed about 50. / Twitter

A 64-year-old man has been identified as the gunman who opened fire on a crowd of people from the 32nd floor of a hotel.

At leat 527 have been hurt, as they fled the site.

A Country music festival had gathered 22,000 people next to the hotel. In the midst of one of the concerts, the crowd was hit by indiscriminate shots.

Jason Aldean, the country music singer who was performing when the shooting took place, described the scene as “beyond horrific”. He said he and his crew were safe, but added: “It hurts my heart that this would happen to anyone who was just coming out to enjoy what should have been a fun night.”

The Las Vegas gunman fired on a crowd of about 30,000 people from the 32nd floor of the Mandalay Bay Hotel https://t.co/r7HxhgfNOw pic.twitter.com/Vo1cKpcH3R

The police believe the gunman shot and killed himself. They found him dead in his room at the hotel.

At least 17 guns were found in his hotel room, according to official statements from law enforcement officials.

An additional 19 firearms, explosives and several thousands of rounds of ammunition were found at the suspect’s home in Mesquite, Nevada, officials said after authorities executed a search warrant early on Monday morning. Police are preparing to raid another property of the suspect in Reno, Nevada.

This new tragic incident re-opens the long debate about gun control in the USA.

"NO CONNECTION TO INTERNATIONAL TERRORISM"

The FBI rejected this, FBI Special Agent Aaron Rouse said: “We have determined at this point no connection to an international terrorist organisation”.

President Donald Trump and many other national leaders expressed their grieve and support for the relatives of victims.

My warmest condolences and sympathies to the victims and families of the terrible Las Vegas shooting. God bless you!

Afterwards, speaking at the White House, Trump condemned the shooting as an “act of pure evil” and called for the country to come together, saying, “Our unity cannot be shattered by evil, our bonds cannot be broken by violence.”

Evangelical Christians called to pray and support the victims as well.

The reports from Las Vegas are horrifying. Praying for the victims, the city, and for those who will minister in the aftermath.

Pray for the families of those killed and for the 100+ wounded in a shooting rampage last night in #LasVegas. #LasVegasShooting

Published in: Evangelical Focus - world - At least 59 killed in worst US mass shooting