Gospel of Jesus, backbone of the Church

The International Leadership Forum (ILF) in Tegucigalpa (Honduras) closed by commending Efraim Tendero as the new General Secretary of the World Evangelical Alliance.

The group attending the WEA meeting in Honduras. / Facebook WEA

Honduras hosted the International Leadership Forum (ILF) from the 9th to 12th of February, 2015. The international meeting gathered 80 leaders from Evangelical Alliances worldwide.

A quarter of the attendants were general secretaries of national Evangelical Alliances coming from the 5 continents. The regional leaders of every continent, the chairmen of the commissions and the international leadership team (which manages and coordinates the WEA) were also there.

It started with the opening in which the highest political authorities of the country attended, and finished in a very intimate mood taking the Lord’s Supper together, “these have been days of intense work in which a lot us there had the conscience that we were facing an historic moment, because there had not been a global meeting like this since we had our last General Assembly in 2008”, Llenas told to Evangelical Focus.

The growth of the WEA in the last years showed all those who attended the urgent need of providing a renewed structure which gives answers to the challenges of a Global Church that is also growing constantly.

One of the themes that were discussed these days was the importance of the “Global South” in Evangelical Christianity. This could be seen in the fact that this assembly was held in the continent of the Latin Evangelical Alliance, the last regional alliance to become a part of the WEA, in 2013. Another clear sign of the  the “Global South” ´s relevance in Evangelicalism, is the appointment of new secretary general, who is from the Philippines.

The need of better structures to facilitate communication and exchange was a topic that came up in the conversations. There needs to be a de-centralized network, much closer to the Biblical vision of the Church; instead of pyramidal structures and vertical leadership. The WEA exists to serve the church so that it can do the Mission of God.

There also was an agreement around the fact that the Scriptures are a backbone for the personal life and the action of the churches, which leads to the importance of the values of the Gospel when doing the task of God and the necessity that every person related to an Alliance lives a life of holiness and service.

These central values should give character to the WEA movement against other “anti-values” like pride, selfishness, control, power and anything which puts the human being in the center, taking the place which belongs to God.

COMMENDATION AND MESSAGE FROM EFRAIM TENDERO

In this spirit, the International Leadership Forum closed with a service to worship God. In this last session Efraim Tendero was commended as the new General Secretary, surrounded by pastors and leaders from all 5 continents and being anointed with oil by Bill Taylor, who has invested 29 years of his life in the commission of Missions. 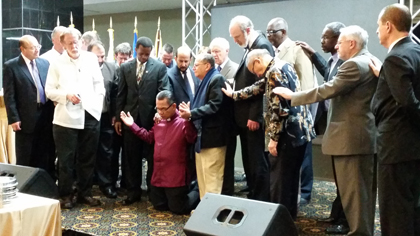 After the commendation, Efraim Tendero shared the main lines and his priorities in the new role, expanding more on some ideas he had already explained briefly in his first interview with this magazine.

He said: “The task of leading the WEA is impossible for a human, it is beyond the capacities of anyone and concretely, beyond my capacities. But I will accept this task for three reasons,” he added.

The first reason is that he felt “a clear calling by God. My mentors and my family gave a unanimous ‘yes’ and I saw that if God is with me, even the impossible for men is possible for God.”

The last strong reason in Tendero’s decision to accept the new task is “the clear purpose of the WEA. It is very difficult, impossible, to guide an organization which does not know what is the reason of its existence. But when there is an organism with its foundations in the purposes of God: furthering the witness of Christ, strengthen the Church and pursuing holiness; then the difficult again becomes possible. All of my ministry is serving the Church so that the Church is useful to transform and disciple the nations.”

Published in: Evangelical Focus - world - Gospel of Jesus, backbone of the Church