“My name is Rachid, I am a Moroccan Christian”

He is one of several Christians in the country who are now publicly asking to be recognised and respected: “We are no aliens, we are Moroccans”. 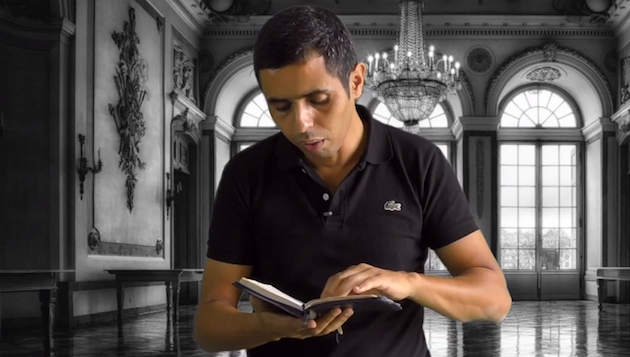 Rachid and his Bible. / Photo: H24info

His name is Rachid and he was born and lives in Agadir, a coastal city of Morocco, near Marrakech. He is 42 years old, married, and the father of five children.

Rachid became a Christian in the 90s. After years in hiding, he now publicly confesses his faith and uses the internet to “share the real Christianity” among fellow Moroccans.

An example of this openness is the conversation he had recently with Moroccan new website H24info. It was published on Christmas Day.

Question. How did you convert to Christianity?

Answer. I became a Christian as many other Moroccans. I mocked that religion, mainly because I come from a very Islamic Sufi family. But I became interested in Christianity when I was 12 years old. I listened to a radio program of Monte Carlo radio, in which one of the broadcasters spoke in Darija (Maghrebi Arabic), and that attracted me.

Later I discovered the Gospel in Arabic and the enabled me to leave behind the mistaken ideas I had had. I understood that Christianity is a religion of love, peace and humility, contrary to what I had seen around me and in Zaouia where I grew up.

Q. How did people around you react when you converted to Christianity?

A. I lost my job as an accountant in a company, and I know work as a freelance. Many people know me here in Agadir, it is not always easy to find a stable job, even after so many years. With my family it was difficult as well, because I come from a very religious context. My father is a well-known Fiqh in the region and his reaction against my conversion was something one would expect.

Now, thank God, everything is fine with my parents, though the tension is still there with my extended family.

Q. Are your children Christians?

A. No, because we Christians do not impose our religious beliefs on our children. I will guide them and tell them about my personal belief but with no imposition. They will be free to choose.

Q. How did the latest meeting between the national coordination of Christians and the National Commission of Human Rights go?

A. We presented a letter with a list of petitions, including the right to marry according to the Christian tradition, the right to bury our deceased, the right to pray in churches and the right to use Christian names. The meeting went well and those in responsibility in the National Commission of Human Rights received our document and assured that our demands are legitimate. They also encouraged us to be a bit noisier in explaining our cause.

Q. How have you celebrated Christmas this year?

A. With brothers and sisters we met in houses to pray, chat, have food and spend a good time together, like everyone else celebrating the end of the year. We are no aliens, we are Moroccans, but different from the majority when it comes to beliefs. People believe we drink alcohol, etc. But actually, we are more devout than most Muslims.

Q. Are you Protestant or Catholic?

A. Neither one nor the other. Actually, most Moroccan Christians are evangelicals. This is an election to protect myself from divisions and to avoid cults.

Q. How do you relate to the political authorities?

A. My relationship with the authorities of Agadir is excellent. They respect me a lot, they frequently ask me about how I am doing, and they are in charge of my security; there is an atmosphere of confidence between us. Every time our community works on social or charity projects, we inform the authorities. It must be said that in Morocco the problem is not so much the authorities but society. Authorities are understanding and mature.

Published in: Evangelical Focus - world - “My name is Rachid, I am a Moroccan Christian”