Nicaragua: “Evangelical churches have not been brave enough to lead the people in the midst of this crisis”

Nicaraguan pastor and author Amilcar Kraudy, analyses the role of the evangelical church in deep socio-political crisis. “I believe that there is a time to pray, but there is also a time to move forward”. 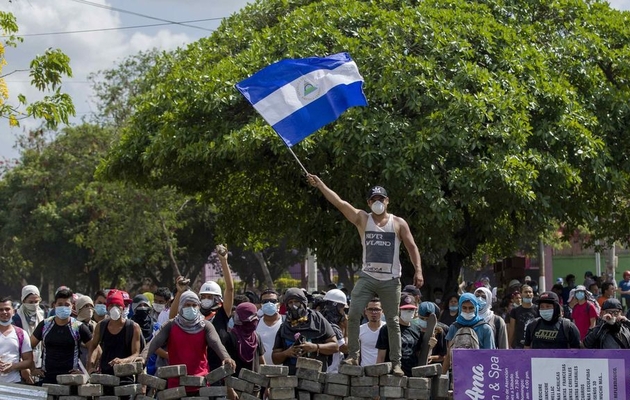 The crisis began in Nicaragua on April 18.

At least 285 people have died, 2,500 have been wounded, 156 disappeared and 46 are permanently disabled in Nicaragua, due to the repression of the Government of Daniel Ortega, a report released by the Nicaraguan Association for Human Rights says.

According to the report, 20 minors, 20 police officers and a journalist have been killed since the crisis began on April 18.

Amilcar Kraudy, pastor, leader of the Beraca Family Ministry in Managua, lecturer, and author of many books, shared his views about the conflict that has broken the Central American country in recent months.

In an interview with the Latin American news website Evangelico Digital, he analysed what has been the role of the Nicaraguan evangelical church in the face of the crisis and what it should do in the future.

Question. What has been the role played by the evangelical church during all this time?

Answer. The problem of the evangelical Christian church in Nicaragua is very similar to that of Latin America.

We have a double discourse, we are always saying that Christians should not get involved in politics, that we are apolitical. But that is totally false because all human beings have a political position.

When everything started, the evangelical church called for the violence to stop, wherever it came from. Later, a son of a presbyter of one of the largest denominations in the country died and the denomination said that they condemned that death. But they never said it was a murder, despite the fact that the man was shot dead.

There has been a low profile speech and there was no firm position according to the circumstances, condemning the actions of the police. That led to the population not speaking very well of the evangelical Church.

In Nicaragua, more than 50% of the people are evangelical Christians, but in a national dialogue the evangelical church was conspicuous by its absence. This is because we have good leaders within our organizations, but we do not have a real impact when it comes to bringing a prophetic voice to the situation of the nation.

Q. Some evangelical leaders have been very close to President Ortega in the past. What has been the position of these leaders, now that all the people have turned against the government?

A. They continue in their media position, and the majority of the evangelical leadership - including those who have had a lot of relationship with him - continue to call the Church only to prayer.

I do not think that evangelicals should call an insurrection or be disobedient, but there has not been a clear instruction.

When Moses saw the Red Sea, he began to pray and God said: 'Why are you crying out to me? Tell the Israelites to move on. Raise your staff and stretch out your hand over the sea to divide the water'.

I believe that there is a time to pray, but there is also a time to move forward, and the Church has not been brave enough to lead the people in the midst of this crisis.

Rather, we have called only people to be fast and pray, and that has led to a loss of leadership. If you ask me who is the big loser amidst everything that is happening in Nicaragua, I would tell you that the evangelical Christian leadership with its media position.

Q. What would you like to see the church doing at this time?

A. If we are 3 million Nicaraguans, don't you think we could have a more belligerent position? Recently, an act was held in the Square of the Bible and the largest denomination, which boasts of having 1,2 million people, could not place more than 400 people in that square. That's because its leadership does not define its position on the crisis.

Some of us have decided to stay apart from what the denominations are doing. We have seen the prayers in public places, moments that have been very powerful, but we are 3 million, and in none of those places there have been more than 1,000 people.

There was only one great demonstration of the evangelical Christian youth, quite large, more than 3 or 4 kilometers long.

Today, under the conditions of the country, there are not many demonstrations, because of the presence of snipers in buildings that shoot at people who walk in the streets with a Nicaraguan flag in their hands.

The lack of tolerance in this country is taking us to extreme situations.

We have seen that the level of prayer of the Church has been extraordinary. Groups of people, ministerial networks, denominations, are praying. But the great majority of the church is not prepared for times of crisis, nor to act outside the four walls of the church.

Churches are only worried about having their buildings full, but not about preparing leaders for society. We do not have any representative in a national dialogue.

Q. Has there not been a single representative of the evangelical churches in the entire process of the national dialogue, then?

A. Initially, it was said that there were going to be four participants. Two or three denominations put their representative. I think there was a Baptist, one from the Assemblies of God, one from the Church of God, and I do not remember the other.

In the end, the Catholic Church, along with the government, decided who went and who did not go, and the evangelical Christian church was ignored and set aside.

We are always saying; 'I am the largest denomination, I represent 3,000 pastors, I represent 5,000 pastors'. But that only shows that you may have many members, but you are not able to mobilise people or to show that you have a representativeness in the nation.

I think that we will see an emerging leadership emerge in the middle of our nation in the coming days. I believe that belligerent Christian leadership, willing to take positions not necessarily within politics, but within the actions of the nation, will have to be seen soon.

I believe that Nicaragua, despite what others said, is still a land of peacemakers. In the streets there are thousands of people without a weapon in their hands, confronting armed police.

It is an unequal battle. I think the country has become ungovernable for the government that we have today, and there has to be a peaceful solution.

Q. What is your analysis of what is going to happen or what might happen in the future? Do you think President Ortega will loosen his conditions or leave office?

A. In this country, a totally strange phenomenon occurred: the political parties were left aside and the young people took the initiative. Now the peasants and the ordinary people are there too.

The problem is that the population lost respect for the country's institutions and I do not see how they can recover the country's governability without making really profound changes.

It is very difficult to believe that, if tomorrow they remove the barricades, everything returns to normality. The wound in society is very big and it is very deep.

Political analysts and ordinary people do not know what to think, because it is very difficult to find a way out.

The OAS talks about advancing the elections by the end of 2019, but if we continue 18 more months of battle, I believe that there would be no people left in Nicaragua.

We need a democratic solution in the coming days. We believe that God will intervene. We hope God will open a window, so that we will see our nation return to the path of justice.

I really believe that this is going to bring an awakening. The Christian church today is praying for a revival in Nicaragua. I am certain that we will see the best Nicaragua emerge in the coming days.

Published in: Evangelical Focus - world - Nicaragua: “Evangelical churches have not been brave enough to lead the people in the midst of this crisis”