Representatives of the Democratic Federation of Northern Syria explained in Brussels their social model for a post-war Syria. The initiative for the cooperation was taken by the Christians, in collaboration with Muslims and other groups. 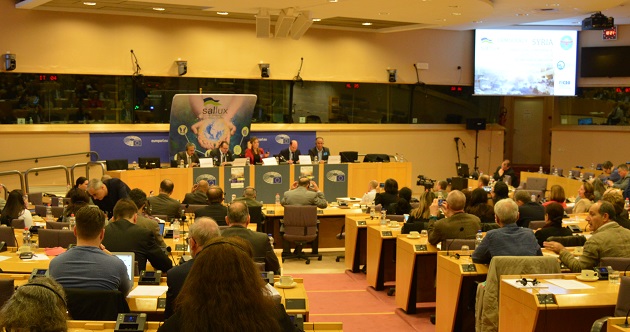 Participants of the High Level Conference on Syria in the European Parliament in Brussels. / Don Zeeman

The conflict in Syria started over 7 years ago and up till now there seems to be no solution to the problem.

International institutions like the European Union and the United Nations are looking desperately for ways to end the hostilities but have not been succesful so far. Yet, in the North Eastern part of Syria the local population worked out an alternative that might be an example for the whole region.

During the last months, representatives of the Democratic Federation of Northern Syria (DFNS) visited EU politicians in Brussels seeking support for their initiative. During a high-level conference organised by several christian MEP’s they explained their vision on the actual situation. 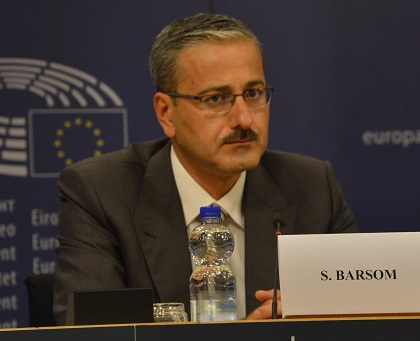 The Northern part of Syria, bordering Turkey and Iraq is a very diverse area. Kurds, Arabs, Syriacs, Assyrians, Armenians, Turkmen, Circassians and Chechens are living together in an area that makes up about one third of Syria. Although it is a part of that country, the region – in the Western world also known als Rojava -  is virtually autonomous.

The population has suffered a lot from the ISIS-terrorism. In 2014 the city Al Raqqah, now part of the DFNS, was declared the capital city of the ISIS-Caliphate, untill it was liberated by the Syrian Democratic Forces. By that time the city was almost totally destroyed. Once the area had regained its freedom, representatives of the population decided to continue their cooperation, changing it from a military operation into a political coalition.

Remarkable was the fact that the Christians took the first initiative. They succeeded in bringing together Muslims and Christains in a ‘joint venture’ based on true democracy. As (co-)presidents of this Democratic Federation were elected Kurdic Muslim Fawza Yousouf and Assyrian Christian Sanharib Barsom.

By the end of 2016 all ethnic and political fractions signed a ‘social contract’ which serves as the constitution of the Democratic Federation.

This contract has many similarities with the European basic laws and differs in many ways from the common societal principles in the Middle East. DFNS is founded on the principles of gender equality, ethnic and religious tolerance, sustainable ecology and self-defense. The fact that the Federation is serious about freedom of religion as well as the fact that the initiative for the co-operation was taken by the Christians, was enough reason for the European Christian Political Movement (ECPM) to fully support the efforts of DFNS. 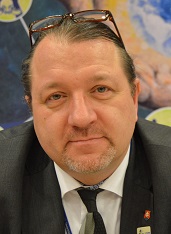 Branislav Škripek, MEP for Slovakia, president of the ECPM and host of the conference described the motivation for this support in his opening speech: “Europe should listen as these people are working to build something new together after a terrible war in which a genocidal enemy was defeated. The international media did not cover their successes. Now they are rebuilding their world after ISIS. They need the future the same as we do. We can give a tremendous and powerful answer to the atrocities in the country by helping the Federation of Northern Syria in all ways possible”.

Johannes De Jong, general manager of Sallux (the name meaning ‘salt & light’), the founding organisation behind the ECPM, adds: “As a Christian European political movement, freedom of religion is very important to us. We want to take care for our brothers and sisters, whether they are Syriac or Kurdic Christians. The ethnic background does not matter. I visited the region myself and I have seen that the people enjoy real freedom of religion. I have been in a church in Kobani (a city liberated from ISIS occupation in 2015) and the converts there can freely gather in their church, in all openess. This is unique in the Middle East. Sometimes it is even hard to imagine this is real. When I report about the situation, I often meet a lot of scepticism. People are so prejudiced and simply say it can not be true. But I have seen it with my own eyes”.

CAN IT BE TRUE?

A region in the Arab world that is totally ruled by democracy and grants full rights to women and youth? A system that is based on mutual respect in a country that is plagued by an ongoing war between government troups and rebel forces? It is hard to imagine with all the news we heard about the Middle East – it is almost like there is an ‘other Syria’. The story sounds to good to be true. And to some extent it is.

The first problem is neighbouring Turkey. That country has a problem with the Kurds and invaded last spring the city of Afrin and its environments - thus violating the sovereignty of Syria. Abdulrahman Hasan, member of the Governing Board of DFNS witnessed about the situation: “Our heritage was attacked, the city was destroyed. We suffered gas attacks, several hundreds of people were killed. Villages were plundered, women and girls were taken hostage, men are mssing. Also several churches were destroyed and church members arrested”.

DFNS, with a large number of Kurdic inhabitants, has a long border with Turkey and is very vulnarable on that side. The Federation is hoping on support from the European Union, but the EU has a strict policy of not giving any weapons to the region. An understandable approach – more arms will possibly increase the violence – but it undermines the strength of the Syrian Democratic Forces. Another problem is the fact that DFNS is ignored by the international community. Up till now the Governing Board has not been invited for the peace talks in which other parties participate. The frustration of not being heard weighs heavily on the people of North-Eastern Syria. Although DFNS has made many efforts to set an example for the whole of Syria, there seems to be no real interest.

SILENCE IS A CRIME OF WAR

Croation MEP Marijana Petir criticised the Europeon Union for not doing enough to help the victims of the Syrian conflict. Neither is she happy with the fact that DFNS is mainly ignored. “It is important to talk about Syria in the European Parliament because the EU in the last seven years has failed so many times. Now the Syrian war has entered its 8th year and the Observatory of Human Rights stated that almost half a million people were killed in the hostilities. EU as well as the entire international community has failed Syria. EU has not used all the necessary instruments, as it should have done. Every violation of human rights, every bomb and every attack on civilians, every act of torture is our concern. Silence is also a crime of war. The European Union did not always remain silent, but mere words are not enough. Fortunately, there are individuals, members of the Parliament, who will not rest and will not be tired of advocating for these people”. 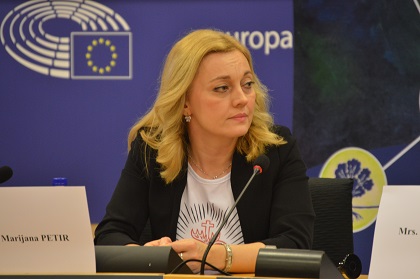 In the final statement of the High-Level Conference, Branislav Škripek made several requests to the European governments. First of all he asked that the presence of DFNS in the general peace talks would be ensured. He also urged that the Turkish agression in Northern Syria would be condemned by the international community and that the Turkish government would be pressed to leave the occupied area. Furthermore he asked for support to provide the necessary measures for the safe return of the refugees to their homes and to provide humanitarian aid for the reconstruction of the liberated areas.

Over the last year, co-president Barsom has urged the Western world several times to support DFNS. His appeal also went specifically to the churches. His hope is that the European Christians will help their brothers and sisters in Syria. In spite of the many difficulties in the area, he remains optimistic about the future of Northern Syria and the rest of the country: “We have been able to defeat Da’esh (ISIS) and now we are on the right path to rebuild our community”.

“Coming to the EU-Parliament in Brussels is very positive and we hope to meet our friends here who are ready to support us politically”. After the nightmare of many people being killed and the ongoing refugee crisis, Barsoms dream is still a united and peaceful Syria. Although DFNS is de facto functioning autonomously within the chaotic Syrian situation, he does not have any plans for an independent state. “Obviously we want one total Syria, a united Syria”. Let’s hope Barsom’s dream may come true soon.

Published in: Evangelical Focus - world - An ‘other Syria’?