The Argentinian Senate votes against abortion

There were 38 votes against the Bill, 31 in favor, and 2 abstentions. The Bill cannot be presented again this year, but it will be a key issue in the 2019 presidential election campaign. 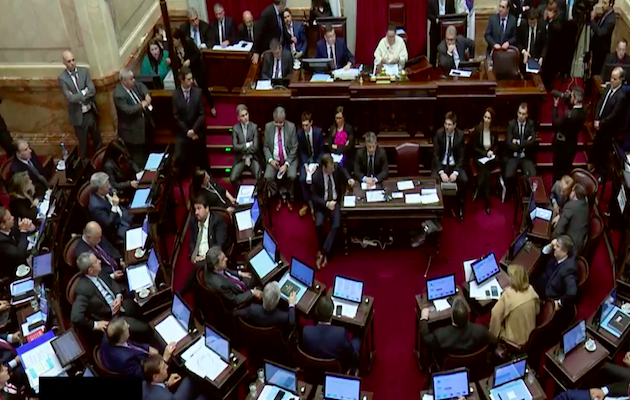 The Bill to decriminalize abortion has been rejected by the Argentinian Senate.

Despite having been approved in the first instance by the Parliament in June, with a difference of only four votes, 38 senators have voted against the proposal while 31 have voted in favor and two have abstained.

The Bill cannot be presented again in the remainder of the year. However, it will be a key issue in the presidential election campaign of October 2019.

According to the some national media, there were riots on the outskirts of the Congress between supportres an opponents of the Bill, while they were waiting for the results.
Police arrested eight people accused of resistance to authority, and a woman has been injured.

The debate in the Senate on the abortion Bill, which proposed allowing the voluntary interruption of pregnancy until week 14, lasted more than 11 hours.

This long discussion shows the big division that exists today in Argentina, not only among politicians, but also in society.

"If I had the certainty that by voting negatively there would not be more abortions in Argentina, I had no hesitation in raising my hand. The problem is that the Bill will be rejected and abortions will continue to occur", said the former President and current Senator for Buenos Aires, Cristina Fernandez de Kirchner.

She also explained that she changed her vote after seeing the demonstrations in favor of abortion.

Meanwhile, the senator for Tierra del Fuego, Miriam Boyadjian, pointed out that "if we analyze the Bill deeply, I consider that it is denying the right of the presumption of life, of the existence of the unborn child since conception. In other words, there is not one right but two".

The Christian Alliance of Evangelical Churches of Argentina (ACIERA in Spanish) has published on its website a statement celebrating the decision of the Senate.

"We congratulate the Senators who have honored the dignity of the life of the unborn, have decided according to our fundamental laws, and with their vote have rejected the Bill."

PROTECTION FOR THE MOTHER AND BETTER ADOPTION LAWS

Additionally, they asked the State for prevention and sexual protection to avoid situations of unwanted pregnancies, and insisted on the need of developing better adoption laws.

"We ask the State to seriously and responsibly articulate public policies on prevention, contraception and reproductive health, and to create support and follow-up projects for women whose pregnancies have not been sought”, they said in a statement.

Regarding adoption, they asked for “an adoption legislation that allows adoption in a simple, fast and safe way, so that it can be an option to maternity for those who do not want or could exercise it".