The political conflict in Cameroon threatens freedom of Christians

Up to 50 Christian schools and hospitals have been affected, and the military has kidnapped four churches. “We need peace and the UN intervention”, a Cameroonian Christian says. 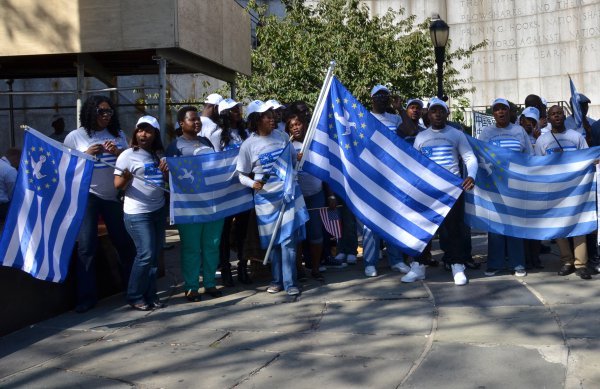 Cameroonian citizens with the flag of Ambazonia. / Facebook UNPO

Last October, Paul Biya (86), the second longest serving president of Africa, won the elections in Cameroon with more than 70% of the votes.

The octogenarian, who has been in power for 36 years, will continue in office at least six more, despite the complaints of the opponent Maurice Kamto, who appealed the elections and unsuccessfully claimed their nullity.

THE CONFLICT IN AMBAZONIA

One of the most difficult scenarios for the president is the conflict with the self-proclaimed Republic of Ambazonia, in the West and English-speaking region, with three million people.

Up to now, the president's policy has been based, above all, on military actions in favor of the defense of a unitary and centralized state in Yaoundé, against the groups in favor of independence that denounce what they consider to be privileges of the French-speaking part.

The conflict, which has its origins in the colonial division of the continent and the incorporation in 1961 of the former South Cameroon, occupied by the British, to Cameroon, of French exploitation, has caused the death of hundreds of people, including an American missionary killed in October, and the displacement of tens of thousands since 2016.

“WE NEED PEACE AND THE UN INTERVENTION”

Christians are not exempt from constant confrontations either. In fact, they have been the object of one of the last actions by the independence militias, which in early November kidnapped 80 students from the Presbyterian school in Bamenda.

Although the students have been released, “we need peace and the UN intervention”, says a Methodist Christian in Cameroon, who has agreed to speak with Spanish news website Protestant Digital, preferring to keep his identity anonymous.

“Many people die every day, homes and villages are burned, there are famished people and also those who take refuge in Nigeria. We do not have a voice in our country”, he adds.

Up to 50 primary and secondary schools and Christian hospitals have been affected by the conflict, according to the secretary of communication and information of the Council of Protestant Churches of Cameroon, Gustav Ebai, who has lost four relatives in the clashes.

The military has also kidnapped four churches to turn them into barracks. “The government of Ambazonia, which controls most of the Northwest and South west, has placed a group of soldiers in the school until the crisis is resolved”.

“There are often shootings between different forces, and a stray bullet can kill a minor”, explains the Methodist believer.

Because of this tension, the Presbyterian Church in Cameroon (PCC), published a statement last October, in the community bank holiday.

“Given what the English-speaking community is going through at this time, we cannot have a celebration while many of God's children are being killed, suffering or living as internal or external refugees”, says the text signed by the Reverend Fonki Samuel Forba, of the PCC.

“The emphasis should be placed on supplying the Working Fund for the Mission, to allow the church to continue assisting our pastors and brothers displaced by the armed conflict that has brought pain and suffering to many”, the document adds.

53% of the population in Cameroon is considered Christian, according to the Joshua project. Of these, about 39% are Catholics, 22% Protestants and just over 33% belong to other denominations.

The sources consulted explain that “Cameroon is a country of religious tolerance. There is freedom of worship. Most of the Christians in the country are Catholics, Presbyterian, Baptists and Evangelicals, but there are also Pentecostal groups that are growing”.

In addition, “the main challenge is to meet, and this has made it difficult for the church to have a strong voice in the country".

According to Central African missionary of Assemblies of God in Cameroon, Adongo Augustin Atilas, “believers are not united and live much more the syncretism and its ritual practices, especially when there is a birth or during the mourning after a funeral”.

Ethnic religions represent the third largest group of people in the country, with almost 22% of the population. The second group is Islam (24%), especially in the Northern part of the country, which lives in conflict because of the presence of Boko Haram and Fulani shepherds.

“Muslims and Christians have no problem in Cameroon. They live well and sometimes can share views on Jesus, although it is a taboo for some Muslims. They can visit you at night to pray and study the Bible, but they will never go to church”, Atilas says.

The increasing conflict in recent years has mainly generated two political reactions to the religious fact: indifference and suspicion, depending on the point of view from which one looks.

“The government does not care about anything, it has no solution for the problems of the people, nor is it prepared to listen to the weeping of the masses”, explains the Christian Methodist.

Atilas believes that “Christians in Cameroon are not free to express their beliefs and are threatened by the bad government of the country".

“We knew that there would be fraud in the elections since the beginning. Biya organized the vote, counted the ballots, registered them and proclaimed the results, despite being also a candidate. What can you expect?”

Lately, politics has also become part of “the prominent churches” of the country. In fact, according to the Catholic newspaper La Croix, Episcopalian, Presbyterian and Catholic leaders, have created an alliance with representatives of the Muslim community to mediate in the conflict.

It is estimated that about one hundred pastors of the PCC have fled from the southwest and Northwest regions, because of the conflict.