“If Prime Minister Modi wins again, the persecution of Christians in India will continue to grow”, says Vijayesh Lal, General Secretary of the Evangelical Fellowship of India. Voting will finish on May 19. 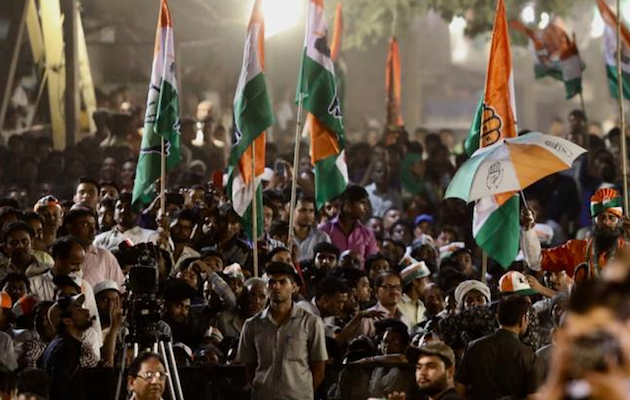 Around 900 million people in India are choosing their representatives in the parliamentary elections.

Voting began on April 11 and will finish on May 19, when citizens of the last states participate in he polls.

“These are the largest elections ever”, Vijayesh Lal, General Secretary of the Evangelical Fellowship of India (EFI), told Spanish news website Protestante Digital.

“The political discourse that we have witnessed during this election is actually the picture of this society. People have not kept the boundaries of common decency, be it the ruling party or the opposition. It has been a very vicious campaign”, Lal says.

ONLY 2 PARTIES HAVE OPTIONS TO WIN

Although there are more than 400 candidates in India, only two parties have real options. On the one hand, the nationalist and conservative Indian Popular Party (BJP in Hindi) of Narendra Modi, who has been the Prime Minister the last five years.

On the other hand, Rahul Gandhi, son of former Prime Ministers Indira and Rajiv Gandhi, and the head of the historic Indian National Congress party (the one that led the independence with Mahatma Gandhi), which lost more than 200 Members of Parliament in the last elections.

Although the surveys say Modi will win, it is not clear how the 543 seats will be distributed in the Lok Sabha, the lower house of India's Parliament. The next Prime Minister will rule until 2024.

RELIGION, KEY IN THE ELECTIONS

“Bhagwan Parshuram embodies courage and honesty. May the power of their ideals make our society more just and harmonious”, said Modi on social media, talking about one of the Indian festivities in honor of the Hindu god Vishnu.

A similar message also appeared in the profiles of the opposition party. Religion, as a key element of national identity, has played a prominent role in the policy of the Prime Minister throughout his five years heading the government of the second most populated country in the world.

“Narendra Modi is a foot soldier turned to officer and political representative of the National Patriotic Organization (RSS). The RSS is the main advocate of the Hindutva ideology”, Lal explains.

Hindutva “is a fascist ideology that believes in one nation, one culture, one people. They openly admire people like Hitler and believe in the final solution. It’s a threat for the democracy in this country. It’s a threat to the constitution and to Hinduism itself”.

The World Bank foresees an annual economic growth in India of 7.5% for the next three years (more than one point above China). The threats against minority groups in the country, such as Muslims and Christians, have grown significantly. 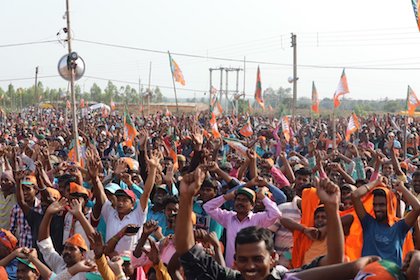 “Modi’s government have closed its eyes when minorities have been attacked. They have given speeches against minorities, including the Prime Minister himself, and his chief ministers”, Lal points out.

The General Secretary of EFI denounces that “many of them know people who have killed other people from the minorities, and they have continuously promoted an anti-minority speech without thinking about the consequences”.

“That kid of speech worked in 2014 and some elections after that, but I hope it will not work in this elections”.

In an article published in June 2015, one year after Narendra Modi became Prime Minister, the main investigator of the Center for International Affairs of Barcelona (CIDOB), Nicolás de Pedro, argued that “the consolidation of Modi’s personal power and that of the BJP as hegemonic in India has been one of the (implicit) priorities of the first year of his government".

In 2016, India ranked 17, with 68 points, in Open Doors World Watch List (WWL). This year, it is among the ten most hostile places in the world against Christianity, with 83 points.

The EFI denounces all types of violence, judicial harassment and even murders against Christians.

Furthermore, “false causes and arrests of Christian pastors and evangelists are also a problem, and generally, the government does not respond when religious freedom is violated”.

“Even praying at home or in our churches is no longer secure. Sundays, Christmas, or Easter are the moments when Christians are most vulnerable to attacks in India”, the EFI has found after analysing hundreds of cases.

One of the main concerns of Lal is what he considers to be “anti-Christian propaganda” and “hate speech”, against minorities such as Christians (just over 2% of the population), promoted by Hindutva ideology.

“These are the same people who killed Mahatma Gandhi and who keep on targeting minorities, including Muslims, for a long time”, Lal explained.

The targetting of Christians “begun in the mid an the late 90s. Before that, Christians were targetted but not in a sistematic way. They have sometimes been seen as the enemy number two and other times as the number one enemy. It depends on which is better for the followers of hindutva”.

“IF MODI WINS, PERSECUTION WILL CONTINUE”

“It is a fight to see if India will remain as the world’s largest democracy or not, because those who have unleashed this ideology”, believes the EFI Secretary General.

Since 2009, the Evangelical Fellowship of India has published “a yearly report in February, where all the incidents that we have been able to verify against Christians are documented”. This year, they registered up to 325 incidents against Christians in the country during 2018.

“Documentation is very important, so that we help the victims with it, and take the important cases to court. We believe that every citizen of India should have freedom of religion, a right that is enshrined in our constitution”, Lal told Protestante Digital.

The EFI “has been praying for a government which is close to the heart of God”.

He thinks that “persecution of minorities in India will not decrease”, because “the poison of hatred, polarisation and sectarianism, has gone into deep. The problem is that the lunatic fringe has now become mainstream”.

During the government of Atal Bihari Vajpayee (the first BJP candidate to become Prime Minister), there was a lot of infiltration into the administration, the executive, the autocracy, and the jurisprudence.

“When Modi was chief Minister in Gujarati, he perfected the art of infiltrating all the administration levels. Those who follow the Hindutva ideology are already in important positions”, Lal explained.

“The Indian National Congress party thinks that we always support them, but they never come to us for votes”, he added.

Despite their silence during the campaign, the EFI is “praying that those who win will come from the Lord”. They also pray “for economic prosperity and equality for everybody”.

Lal stressed that “India is the best place in the world to live right now, despite all the persecution. We are the world’s youngest nation, and it will have the largest Muslim population by 2025”.

“There is a huge amount of people who don’t know about the Lord and we are commanded by the Lord to share the gospel, so pray that Christians will remain strong, that we won’t be shy to give our testimony. Pray that the Lord will open the doors for the the gospel”, Lal concludes.