Many Christians have joined the anti-extradition bill demonstrations. The song has become a sign of the peaceful protests. 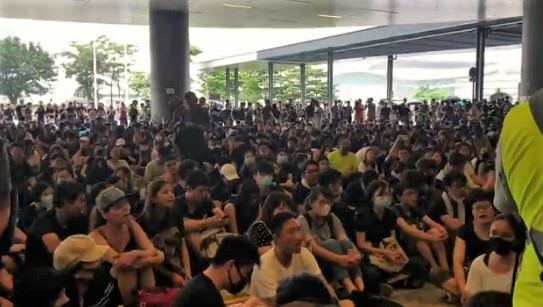 Prayers and the Christian song “Sing Hallelujah to the Lord” have become a common element of the massive demonstrations in the centre of Hong Kong in the last days.

As many as two million people have taken the streets in several occasions in the last ten days, to oppose the passing of a law that would make extradition to China easier.

The great democratic wave of protests forced the parliament to stop the plans that were seen as a capitulation to the Chinese government. Hong Kong enjoys more freedom of speech and religious freedom rights than mainlaind China.

Thousands of Christians have joined the peaceful protests. Some of them started to sing the Christian song “Sing Hallelujah to the Lord”, a peaceful melody that has slowly become the unofficial anthem of the protests.

Videos on social media show how the song can be heared in the different locations where the protests take place, such as the Legislative Council and the place known as “Civic Square”.

Crowds outside the protest spot known as Civic Square sing "Sing Hallelujah to the Lord." They have been doing so since Tuesday evening. pic.twitter.com/asT0PeGqLd

A group of Christians and youngsters have gathered on a footbridge outside #HK gov HQ, facing dozens of police behind barricades. Some of them singing "Sing hallelujah to the lord". Placards read "Stop shooting HK student. Stop treating HK citizens violently."#ExtraditionBill pic.twitter.com/2MWcrQIhbu

Christians have been among the leading forces behind the protests in Hong Kong for more democracy. Several influential evangelical churches have publicly supported the protests. So have Catholic authorities.

An evangelical pastor who led the “Occupy Central” protests in 2014 has recently been convicted of public nuisance.