The March for Jesus gathers millions in Brazil

Three million evangelicals took the streets of Sao Paulo to share the gospel and “cry out for Brazil, for the families, for the end of corruption, for the afflicted hearts”. 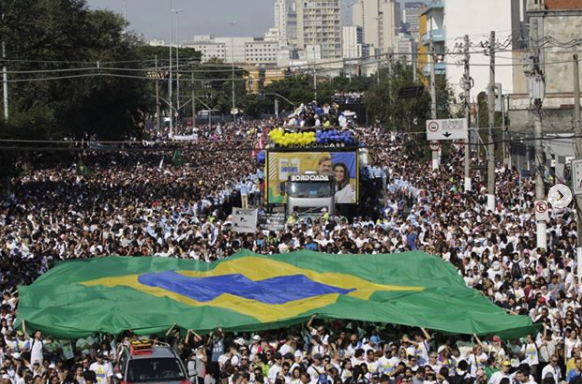 Around 3 million evangelicals, according to the organisers, filled the streets of São Paulo. / Marcha Para Jesus.

Around 3 million evangelicals, according to the organisers, filled the streets of the Brazilian city of of São Paulo, in the 27th edition of the March for Jesus, held on June 20.

The march began at one of the main metro stations of the city, after the opening prayer of Estevam Hernandes, President of the March for Jesus in Brazil.

“We cry out for Brazil, for the families, for the end of corruption, for the afflicted hearts, our country belongs to Jesus Christ. To Him all honor, glory, power and majesty. As it says in Psalms 33: Happy is the nation whose God is the Lord”, he said.

With the theme “The Rescuer”, based on 1 Timothy 2:6, the march was a manifestation of joy, love, hope, gratitude and faith.

“Every year, we have a theme. These themes are a reference of what Christ represents for us. He rescued us from the empire of darkness and carried us into His mighty light. It is for Him that we march”, the organisers pointed out. 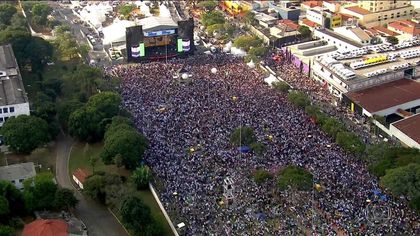 More than four thousand caravans, from almost all Brazilian states, participated in the event. The main evangelical denominations were also present in the march.

The march finished at the Heroes of the Brazilian Expeditionary Force Square, where the organisers set up a mega sound and lighting structure for the concert marathon.

There were more than 10 hours of praise and worship, led by 28 Brazilian gospel bands and singers, and zozens of evangelical pastors and leaders.

“You were decisive in helping change the destiny of Brazil. It is very good to be among friends. And even better when they are friends with God in their hearts”, said Bolsonaro in a speech of about 7 minutes.

The president said that Brazil “is secular but its current leader is Christian”, he mentioned the “ethical and moral” problems in Brazil and added that he hopes to be a “turning point” to overcome them with the help of evangelicals. 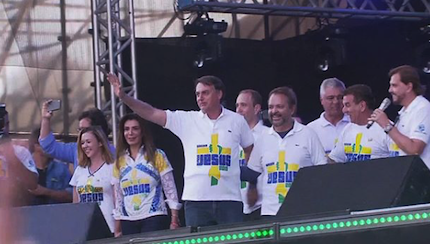 “This is the March for Jesus, but it is also the march of harmony and understanding between those who love Sao Paulo and Brazil”, said the governor of Sao Paulo.

27 YEARS OF MARCH FOR JESUS IN BRAZIL

The March for Jesus, organized by the Rebirth in Christ Church, has been celebrated in Sao Paulo for 27 years, with the collaboration of other evangelical denominations. It is the largest march organized by evangelicals that takes place in Latin America.

Evangelicals keep growing in Brazil. Around 30% of a population of 190 million inhabitants define themselves as evangelicals.

The bench of evangelical parliamentarians does not stop growing either. Although Bolsonaro is Catholic, his wife is evangelical, like his children.

Published in: Evangelical Focus - world - The March for Jesus gathers millions in Brazil