Representatives of Assemblies of God and the Cuban Evangelical League were stopped at the airport when they tried to travel to Washington D.C. The government reacts to the newly formed Alliance of Cuban Evangelical Churches. 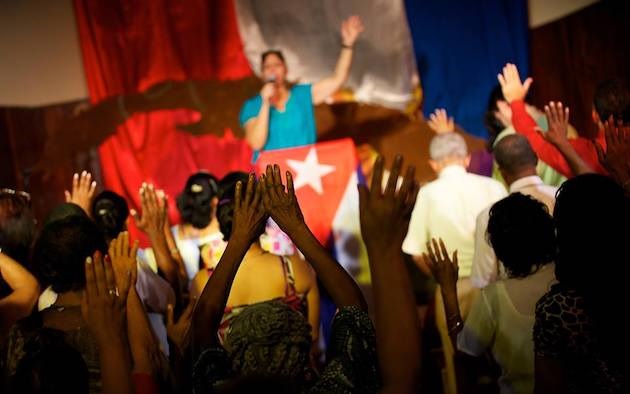 A worship service of an evangelical church in Cuba. / Facebook Evangelical League Cuba

Evangelical leaders Moisés de Prada and Álida León were stopped by Emigration officials of the Cuban government on Sunday 14 July at the International Airport José Martí of La Habana, when they tried to take a plane to attend a religious freedom conference in the United States.

Prada is the President of the Assemblies of God in Cuba, and León heads the Cuban Evangelical League, the first and fourth biggest evangelical denominations in the Caribbvean country.

Both denominations helped to create the new Alliance of Cuban Evangelical Churches (AIEC, in Spanish), an independent body formed to become an alternative to the officialist Council of Churches of Cuba. The Alliance started in June to “defend the biblical values”, according to its foundational document.

Reacting to the unity of evangelical churches, the Metropolitan Community Church and the Council of Cuban Churches, both close to the government, attacked the Evangelical Allliance calling it “fundamentalist” “anti-LGBT” and “fascist”.

Both León and Prada had been invited to the second edition of an international conference on religious freedom organised by the US government in Washington D.C.

The obstacles to the participation in these event organised for civil society groups is “clearly linked to the creation of the AIEC and the 16 petitions to the state made by evangelical churches during the recent constitutional reform”, said an anonymous church source to local newspaper Diario de Cuba.

“Evangelical churches were the main group opposing the Communist constitutional project and helping to put an end to the traditional and fearful unanimity in the votings of the revolutionary period”, the source added. Then, more than 10% of the population abstained or vote “no” to the officialist position.

Evangelicals had asked for more fredom of conscience, the non-cimrinalization of what the regime understands as an “accumulation of wealth”, the understanding of marriage as a union between a man and a woman, and more religious freedom.

Restricting freedom of movement without justification or “regular” (“regulate”, the way Cuban authorities call it) is one of the most common Human Rights violations  used by La Habana against the Cuban civil society.

Álida León said in her Facebook profile that the Immigration Office banned her from travelling because the Cuban administration alleged the religious freedom conference in the US was a “counter-revolutionary event”.