The Vice President of the United States met with specialists of Open Doors, China Aid and the Southern Baptist Convention. 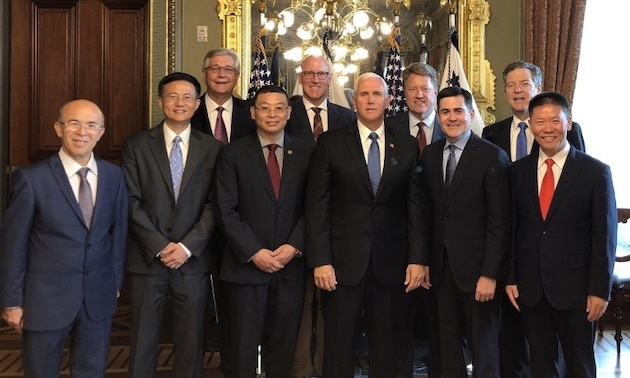 Several evangelical leaders were invited to the White House to a meeting with Vice President Mike Pence to discuss the religious freedom situation in China. / Photo: White House

In the midst of the ‘commercial war’ between the two economic giants, the government of the United States showed it is ready to put pressure on China in the area of the human rights.

An inter-faith coalition of religious freedom defenders was received on Monday August 5 by the Vice President of the US, Mike Pence, to address the issues of the attitude and actions of the Chinese government on this issue.

Pence and other officials of the administration met for about one hour with about a dozen representatives of faith organisations. Among them were several evangelicals, such as Russell Moore, Director of the Ethics and Religious Freedom Commission of the Southern Baptist Convention; the President of Wilberforce, Randel Everett; Bob Fu, Director of China Aid; and David Curry, Director of Open Doors USA.

“There were a handful of leaders from the world dealing with religious liberty who voiced concern about the shocking rise of religious liberty violations in China in the last six years”, Curry told US news website The Christian Post.

In Open Doors’ annual World Watch List, China has climbed to become the 27th country where Christians are most persecuted.

The representative of Open Doors explained that he had been part of similar meetings with the US administration in Washington D.C. in the past to address the situation of faith minorities in countries like Iraq.

This was the first meeting with Pence on the issue of religious freedom in China.

A number of sources have reported lately about China’s “sinicization programme”- the efforts of Chinese authorities to adapt the values and beliefs of Christianity and other religions to the Communist Party’s nationalistic standards.

This strategy has led to a greater vigilance and control of Christian churches, some of which have been closed.

The White House published a statement after the meeting saying the US government continued to be committed in demanding China to respect the right of “Muslims, Buddhist and Christian believers” to practice their faith, a freedom that is “in the Chinese constitution”.