According to the evangelical body, the “legislation is very indulgent due to certain interests”. In 2019, more fires than previous years have been reported. 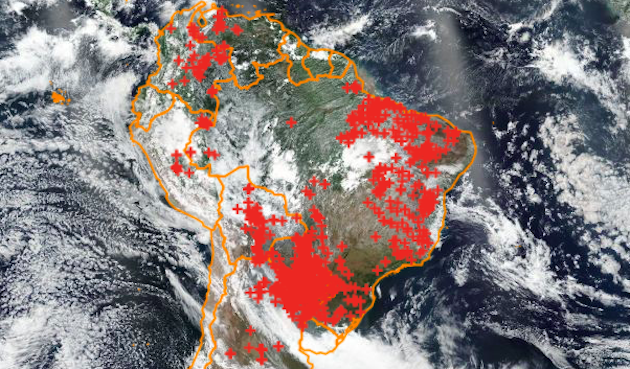 So far in 2019, 144,300 forest fires have been detected via staellite on Brazilian soil, according to the Queimadas website of the National Institute of Special Investigations of Brazil.

The figure represents an increase of around 50% compared to 2018, a year which ended with 94,504 incidents of this kind.

The most affected region is the State of Amazonia. The government there, led by the Social Christian Party, claimed the trend between January and January was positive, with only 1,700 “heat focuses”, compared to the 2,220 of 2016 and the 1,780 of 2016.

The observation from outside indicates that 2019 has been a year of a growing deforestation in the country. Specifically, the Global Forest Watch Fires and the NASA say that there has been a 39% increase in forest fires alerts in the first eight months of 2019, compared to year before – 269,000 vs 220,100.

“The Amazon is not being devastated by fire, as some lying media are saying”, said Jair Bolsonaro, the President of Brazil, at the United Nations assembly this month in New York. The chief of the Brazilian executive has maintained a diplomatic conflict in the last weeks with French President Emmanuel Macron, who said on social media that “the forest of the Amazon, the lung that produces 20% of the oxygen of our planet, is on fire”.

“It is an international crisis”, the leader of the Elysium during the G7 summit celebrated in August in Biarritz. France approved a 22 million dollars aid fund for the Amazonia.

The words of Macron outraged Bolsonaro, who demanded an apology before accepting the aid, and qualified the attitude of the president of France as “neocolonial”.

“Sadly, in Brazil we are living a period of political polarisation”, the executive director of the Brazilian Evangelical Alliance, Beto Barros told Spanish news website Protestante Digital. “The government we have now assumed the commitment of attacking corruption in all the areas of the coutnry and, in the Amazonia region, there are many complicated economic interests implied, because there are many riches on the ground and underground. The government is revealing those interests. This has annoyed people, politicians, NGOs and national and international companies”.

The Brazilian evangelical body says “the fires happen every year for a long time and in all of the Latin American continent”. Brazil registered 141,000 fires in 2017, 125,000 in 2016, and 124,000 in 2015. “Due to the national and international repercussion, people may have thought that these rainforest fires were happening for the first time”, says Barrios.

“Any fire of great proportions causes much harm to nature, the natural reserves and the public and private heritage, and this saddens us”, he adds.

In some places, “the fire seats have been decreasing naturally, because of the rain”, but in other places “troops have been deployed to combat the fires”. Nevertheless, Barros says, the Amazon rainforest is “so dense and wet that it is difficult to be destroyed by the fire”. The real problem is when fires start “where there has been deforestation, be it legal or illegal activities”.

THE PROBLEM OF NON-CONTROLLED DEFORESTATION

In August, the Brazilian Evangelical Alliane published a manifesto reiterating the need of putting creation care at the centre and the importance of “the preservation of the Amazon to help the balance of the climate in the world”. In addition, the evangelical body asked for “tougher laws” about the forest exploitation in the country.

Barros gives more context: “The legislation right now is very indulgent due to certain interests. Authorities have already applied thousands of millions of Brazilian reals in fines, but individual people, national and international corporations appeal to the courts and sanctions end up not being paid or heavily reduced”.

“I have flown over the Amazon glade several times and it is like flying over the sea, it is hours of flight above a sea of trees. And the control becomes even more difficult because we have thousands of kilometres of borders which make the chopping down of trees and the extraction of gold easy”.

According to Global Forest Watch, 88% of the alerts that have to do with recorded fires came from non-protected areas, and 28% were localised in mining areas.